The Recovery of the Wild Turkey A huge dark lump was on a branch of the cottonwood across the river. As I wiped the morning blur from my eyes, it launched itself with stubby wings beating. Barely in defiance of gravity, it coasted to my side of the river. Just over the bank, out of sight, but somewhere beneath the willow, it landed.

“Turkey,” I announced to the somnolent household. I continued watching through the kitchen window, hoping for another glimpse. Instead, from across the river I saw more brown lumps on a downward arc - coming from the pine trees where they had roosted during the night - to the old farm field and orchard. I counted fifteen.

From the spruce behind my neighbor’s several more came down with a flight pattern that seemed to say, “Trust me, I really am in control.” They joined the first bird, over the bank and out of sight. I watched, hoping they might wander up to where I could have a better look - come around and clean up under the feeders. They did not. 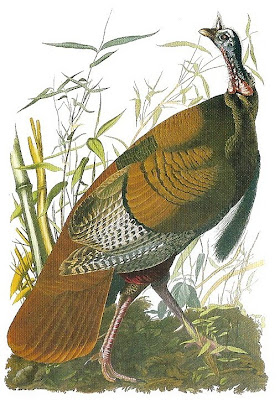 I pulled boots on, grabbed my camera, and silently opened the door. With all the stealth that a city-bred person can muster, I stalked toward the edge of the bank. I saw a dozen heads erect, on long necks. They were watching for me ... wary. I took a half step and raised my camera. They flew - with a roar of beating wings, with a quickness and agility which belied the barely controlled plunges I had seen earlier. My camera recorded only dark blurs as they disappeared across the river.

My backyard experience is not unique. I receive regular reports during the winter from people mesmerized by flocks of turkeys visiting their yards. It is a relatively new phenomenon, and one which we came close to losing forever.

Turkeys are native only to the Western Hemisphere. There are two species - our widely distributed North American Wild Turkey (with six recognized sub-species), and the Ocellated Turkey of the subtropical lowlands of the Yucatan Peninsula.

The Wild Turkey is our largest North American game bird, and one of only two domesticated birds originating in the Western Hemisphere. The Muscovy Duck is the other. 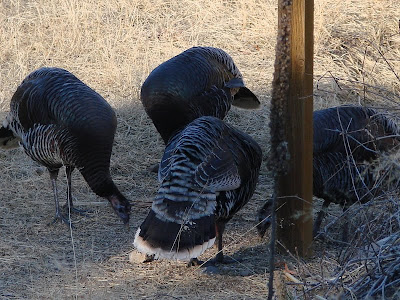 The turkey was domesticated by Native Americans in Mexico and southwestern United States. The earliest archaeological evidence for its domestication appears in Mayan sites dating to around 100 BC to 100 AD. Pueblo societies in the American southwest imported turkeys from Mexico about 300 AD. Turkey husbandry grew rapidly in the southwest beginning around 1100 AD.  In the early sixteenth century, Spanish conquistadors took turkeys to Spain. From there, they spread throughout Europe. By 1524, domesticated turkeys were being raised in England. English settlers then brought domesticated turkeys back to America.

The burgeoning population of the English colonists demanded food. The need outstripped what they could provide for themselves, and so they hunted. In New England, turkeys were abundant, and tasty, and they were heavily hunted. Relentless hunting and elimination of much of their forested habitat resulted in the Wild Turkey disappearing from much of its original range, especially in the northern and northeastern parts of the U.S.

Forbush describes their retreat: “Shooting and trapping the birds at all times soon had its inevitable effect, and the Turkey rapidly retired before the advance of settlement, and soon it could be found only in the wildest parts of the country. In Massachusetts Turkeys were most numerous in the oak and chestnut woods, for there they found most food. They were so plentiful in the hills bordering the Connecticut Valley that in 1711 they were sold in Hartford at one shilling four pence each, and in 1717 they were sold in Northampton, Mass., at the same price. In the last part of the eighteenth century most of the Wild Turkeys had been driven west of the Connecticut River.”

The last turkey on Mt. Tom was reported (and shot) in 1851; a few may have remained on Mt. Holyoke at that date. “Since then the Wild Turkey has disappeared from Canada and from most of the Atlantic seaboard, although a few are still to be found in Virginia and other Southern States, and it is still common in some western localities.”

Forbush concludes his account: “its great size and beauty contribute to make it, to my mind, the noblest game bird in the world. It is destined to vanish from the earth unless our people begin at once to protect it.” 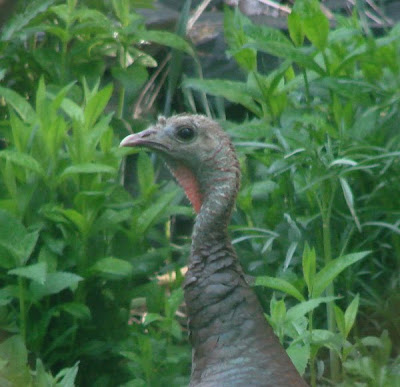 The quotes are all from Birds of Massachusetts, 1929. A turnaround for the Wild Turkey began in 1937 when Congress passed the “Federal Aid in Wildlife Restoration Act.” Lobbied for and supported by hunters, this act placed taxes on firearms, ammunition, and other hunting equipment and designated that the funds raised be used for conservation and wildlife habitat enhancement programs. From fewer than 30,000 Wild Turkeys in the late 1930s, the population today is estimated at nearly 7 million. There are huntable populations in all of the lower forty-eight states and in parts of Canada and Mexico.

I am not a hunter. Hunting was not a part of the urban culture in which I grew up. But I am grateful to hunters and sportsmen. Many of the places I go and experiences I enjoy in the out-of-doors are possible because of the fees, licenses, and taxes they have paid, and the attention they have given to conservation, habitat, and environmental health. Turkeys wandering our fields and woods are but one of those benefits we enjoy as a result of their efforts. Conservation organizations, wildlife agencies, sportsmen, hunters, hikers, naturalists and bird watchers probably have more goals in common than they have differences. 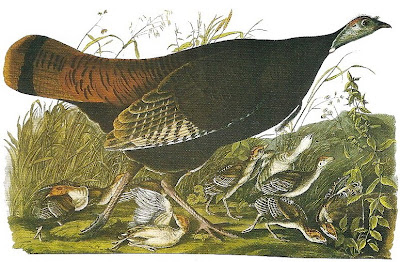 School children may think nothing of seeing a dozen turkeys cross the road and disappear into the forest. They may be unmoved by thirty turkeys feeding beneath a feeder. It may be no surprise to them to happen upon a turkey hen racing through the grasses and brush with a dozen poults behind her. But to those of us who are more mature, these are wonders! We never saw flocks of turkeys when we were young. Only in the last couple of decades has it become more possible to happen upon such sights and they are still not in the every day occurrence category.

I do so enjoy the Turkeys. My kids always get a kick out them too. So often the bus has to stop on the way to school to let them cross. You don't see something like that in the city!

Your right, I don't ever remember seeing one when I was a kid.

Hi Chris,
First congrats on spotting them in your yard and to be able to see them, and then thank you for you message and history about the species. It was quite interesting to read this.
Still, one sentence happened to surprise me, this one: "But I am grateful to hunters and sportsmen. Many of the places I go and experiences I enjoy in the out-of-doors are possible because of the fees, licenses, and taxes they have paid, and the attention they have given to conservation, habitat, and environmental health"
Well, I would say that if this is the case, you are kind of lucky... I'm afraid most of the hunters in my native country do not behave like that. Well let's say for those I met when I was younger and some years ago. it may have change now, but I had seen hunters around a lake, killing everything until nothing was flying anymore. They were even shooting each other some time! I hope this has changed in our country now but I'm not sure.
Here, on the contrary, Icelanders have realized quite soon enough that they depend highly on their resources, both terrestrial and marine resources. They are really trying to be reasonable in everything which is good!
To finish, I enjoyed reading this post a lot. Thanks!

I remember when the Turkeys were reintroduced in Vermont and when I saw my first flock of about 6 in the woods. It's good to have them back, now if we could only have our chestnut trees back too.

What a fantastic post !! Beautiful and amazing shots !! You are a fantastic photographer !! Sorry i am back after a long time on your blog..Beautiful !!

A great post. Thank you, thank you. I am absolutely fascinated with the rewilding that is going on. Living in Manhattan, it is so evident with bald eagles, peregrines and kestrels all over, and now ... coyotes! We've had a few turkeys as well. One known as Zelda is supposedly still living in Battery Park. I've been down to look for her, but not yet seen her. Again, thanks for the info.