I have been working through my photographs from Trinidad since returning home Friday. As I get a handle of the hundreds of pictures, I will post additional ones. Here are a few samples of blackbirds (Icteridae) which we saw during our trip.

First, the Crested Oropendola (Psarocolius decumanus insularis) - This bird was a common visitor to the feeders at Asa Wright Nature Center. 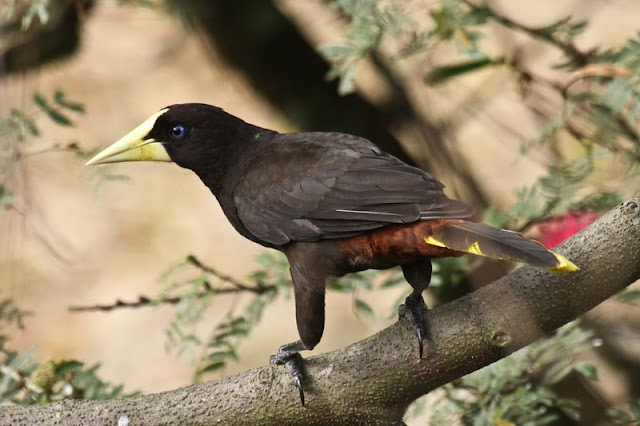 Common in the forests through much of South America, this crow sized Icterid exhibited a personality which reminded me of the Blue Jays around my home and feeders - noisy, wary, swooping in to one tree, then another, then a bush, then a feeder - taking food quickly, but never lingering long. 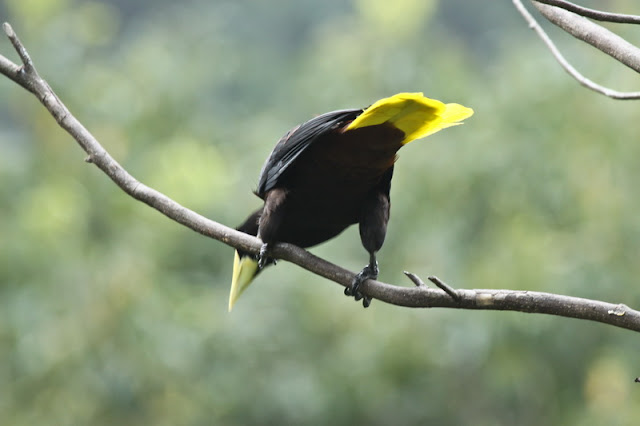 The bright yellow tail probably gives the bird part of its name (oro - gold), while the rest of its name (I surmise) comes from its pendulous nests which it weaves high in the forest canopy in colonies with other pairs. The tail is especially prominent when it flies. This is the best, and sharpest, photo I managed in hundreds of attempts to capture the tail's brilliance as the bird flew quickly. 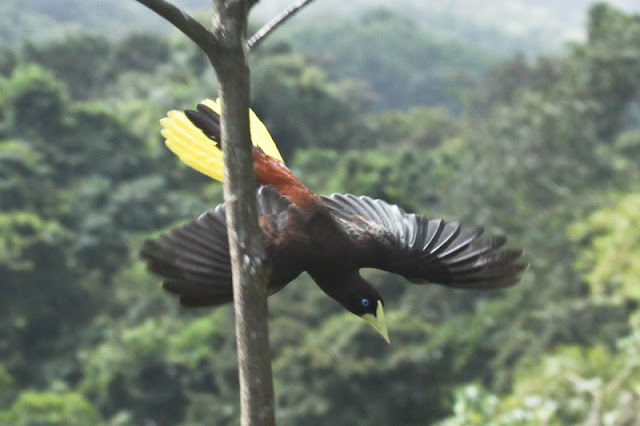 Also from the veranda of Asa Wright, I captured this Yellow Oriole (Icterus nigrogularis trinitatis) 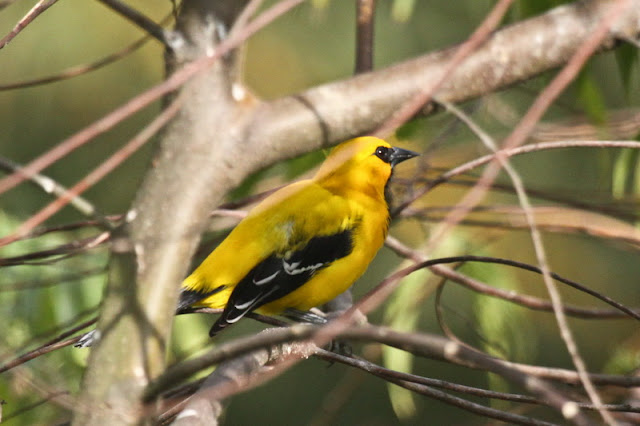 I returned from this trip curious about the relationship between many birds, both on the island of Trinidad and familiar to me in North America. As I have been sorting photographs, I have also been referring to scientific names - and taxonomic tables - in order to get a better grasp on how closely related different birds are. The Yellow Oriole, for example, shares its Genus with the Baltimore Oriole and Orchard Oriole familiar in the Northeast, as might be apparent in the size and shape.

But size and shape can be deceiving. The Red-breasted Blackbird (Sturnella miliaris) is very similar in size and shape to the Red-winged Blackbird ((Agelaius phoeniceus), but not as closely related as the orioles just mentioned, as the Genus names indicate. 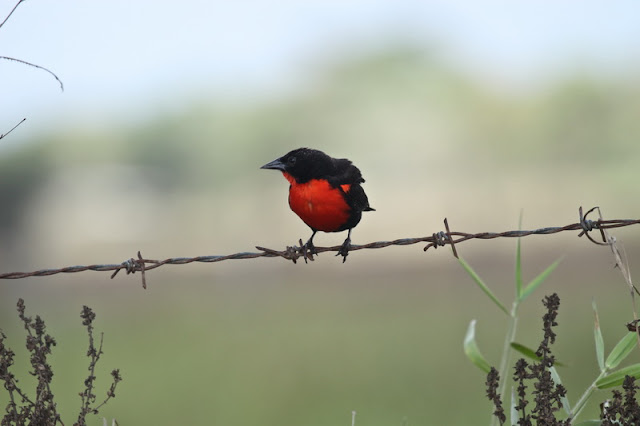 The Red-breasted Blackbird, seen near the agricultural station in a savannah of mixed grasslands and wet areas, was one of the most stunning birds which we saw while on Trinidad. 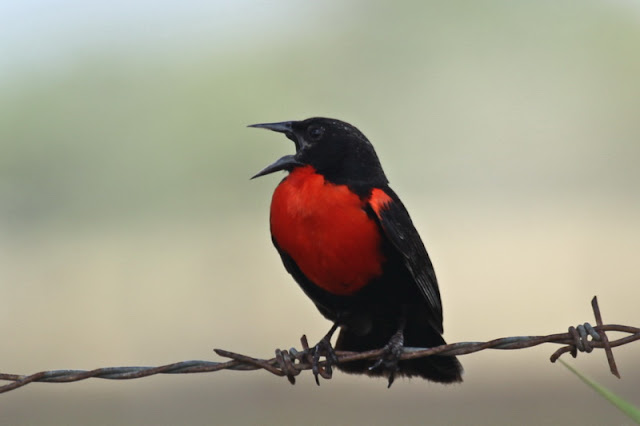 Other blackbirds (Icterids) which we saw were the Yellow-rumped Cacique (Cacicus cela) for which I have no decent pictures - the Shiny Cowbird (Molothrus bonariensis), much fewer in number and marginally more attractive than the Brown-headed Cowbird - and the Carib Grackle (Quiscalus lugubris), which looked like a grackle.

Around my home, the crocus are blooming where the snow has melted; the snow drops are blossoming even before the snow has completely melted; the roads are a muddy quagmire, and the yard is littered with winter's detritus of flower canes, tree branches, road grit,, sunflower shells and who knows what else. It  would all be a miserable mess but for one thing - it is Spring! - and my neighborhood is rushing to life!

Wow, it has probably been a change to go back home, isn't' it...
You got so many colorful birds during your trip :-)
How many new species did you see over there?

What beautiful birds. It is amazing the different colors of birds around the world. Thanks for sharing.

Oh, wow!!! Trinidad!! I can't wait to see all the new birds. You captured some beauties here. Was this your first trip to Trinidad? I've never been. I'll have to live vicariously through your photos...

We loved Trinidad & Tobago when we went last year (in fact, it has kicked into high gear my wanderlust for Central American birding)

Looking forward to more posts and photos! (BTW you did a helluva lot better than I did in capturing an oropendola in flight, and we never got on a Red-breasted Blackbird - nevermind having looks like you show in your great pics!)

What fantastic colors! must have been an amazing trip!!

Hi, I'm from Trinidad... just saw this bird in my neighbourhood (Trincity, which borders the Caroni wet lands in the North). It's the first time I have ever seen a Crested Oropendola AND IO had the pleasure of googling the birds description and finding your blog. Keep up he wonderful work.