More on the Black-capped Chickadee 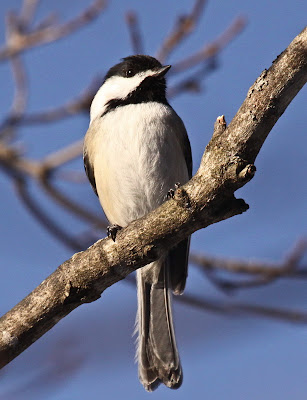 Early last week when I finished my column on the Black-capped Chickadee and hit the send button, I then went outside to check the mail. From the top of a tree somewhere nearby, I heard a sweet and plaintive, “pheee-be, pheee-be.” The high-pitched notes were answered by “pheee-be-be, pheee-be-be.” The chickadee was singing, “Spring’s come ... Spring has come.”

When we begin to hear the chickadee’s “phe-be” in early spring, it is like hearing an overture to a great natural musical revue, a concert which will go on for months as dozens of species sing for their mates.

Our Black-capped Chickadee is a songbird. When it sings - most frequently in the spring and summer - it sings this simple “phe-be” phrase. The song sounds very similar to the repetitive “phoe-be” of the Eastern Phoebe; the phoebe’s “phoe-be” is more explosive, not as sweet or high-pitched, and repeated over and over and over. The phoebe usually does not return to our neighborhoods in southeastern Vermont until very late March or early April. Most of my home records first list it during the first week in April.

Bird songs are closely connected with the breeding season. A male claims his territory and sings. His song is intended to impress the females, to warn other males away from his territory, and perhaps to draw predator attention to himself and away from the vulnerable female who is incubating or tending young. Later in the summer, songbird singing is more difficult to explain; then the young males are learning their songs. 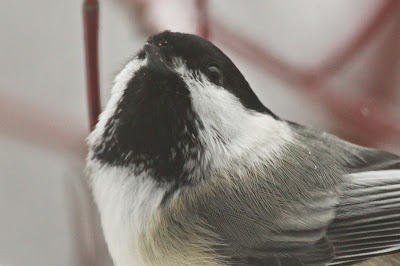 Beginning with the very early North American naturalists, there have been some who have wondered if the chickadee’s song really constitutes a true song intended to serenade a lady love. Bent’s “Life History” cites a late nineteenth century observer who rose before dawn to watch a chickadee excavating a nest in an old apple tree: There sat the chickadee, “within a few feet of his apple-branch door, throwing back his head in the truest lyrical fashion, and calling Hear, hear me, with only a breathing space between the repetitions of the phrase. He was as plainly singing, and as completely absorbed in his work, as any thrasher or hermit thrust could have been. Heretofore I had not realized that these whistled notes were so strictly a song, and as such set apart from all the rest of the chickadee’s repertory of sweet sounds; and I was delighted to find my tiny pet recognizing thus unmistakably the difference between prose and poetry.”

That being said, the courtship rituals of our Black-capped Chickadee are very limited. Though often overlooked in our casual observations, many species have very precise rituals for attracting a mate. The Red-winged Blackbird flashes his bright red epaulets as he “sings” atop the reeds. Grackles spread their tails and flair their wings on tree branches. Brown-headed Cowbirds strut with their heads held high. Evening Grosbeaks crouch on the ground with tail spread and wings fluttering. Jays and cardinals often feed their mates. This is just the briefest sampling of courtship rituals.

The chickadee courtship ritual consists of the male chasing the female. I have stood in my backyard in early April and watched four or five chickadees in loud and noisy pursuit. I presumed there were males pursuing females, males trying to chase off rival males, males and females grabbing a quickie, and who knows what else. 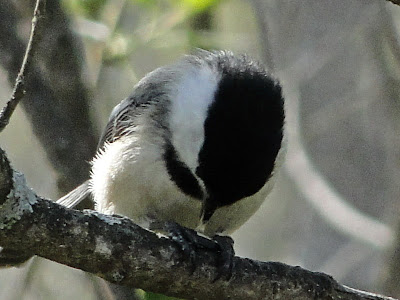 Here is a description from Bent: “the birds grow agitated late in March and increase their vivacity during April and early in May. They hurry between aisles of trees and swerve over bypaths, and males dart at and even clasp one another. Then they part, and the more dominant male pursues and chases a female over brush piles and even to the ground. Then up they arise and hurry onward. A few such days of immoderate activity, and their nuptial rites seem completed.”

Forbush described the male Black-capped Chickadee as a “devoted father, assisting his mate in all the tasks of home-building, incubation and the raising of their offspring; and the birds exhibit a tender affection and constant solicitude for the care of their eggs and young.” Forbush was describing what scientist now term “social monogamy,” where a pair cooperates closely in the whole process of raising young. 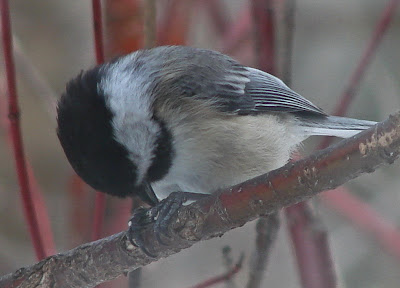 Eventually a socially monogamous pair will raise a brood whose individual parentage is diverse and can only be deciphered by DNA analysis. 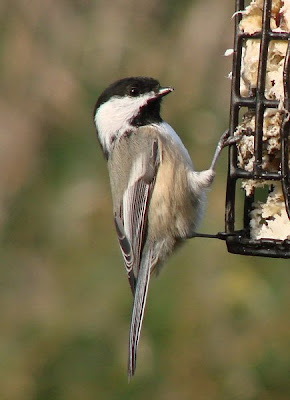 Somewhere in the midst of the courtship chases, a socially monogamous pair excavates a nest hole, or takes over a nest box, or old woodpecker hole, and prepares their nest. Cottony vegetable fibers, hairs, wool, mosses, feathers, insect cocoons - all go into the building of a soft and cozy nest. Anything with fur may contribute hair to the Chickadee’s nest. This time of year when you clean the dust bunnies from under your bed, or brush your dog or cat, scatter the results outdoors. Chickadees, and other birds, may gather it for nest materials. A friend once told me about his old dog napping on the sunny lawn in late April. A chickadee landed on its back, picked out a loose clump of fur, and flew off. The dog never stirred.

Forbush offers this summary of our chickadee: “The little Black-capped Chickadee is the embodiment of cheerfulness, verve and courage. It can boast no elegant plumes, and it makes no claims as a songster, yet this blithe woodland sprite is a distinctive character, and is a bird masterpiece beyond all praise.”

No argument there. With the chickadees in our woods and neighborhoods, we are assured of good birding.

Email ThisBlogThis!Share to TwitterShare to FacebookShare to Pinterest
Posted by Chris Petrak at 6:00 AM
Labels: .Black-capped Chickadee

I'm really enjoying all the great detailed discussions and comparison of birds on blogs out there. Chickadees are a fun bird to watch and to hear. Seems to be a drop off in numbers right now though in Southeastern Mass.

Thank you so much for including the bird calls on your site! I actually included a link to your blog on my own blog posting this morning.

I intend to habitually visit you to figure out who I am hearing in my garden in upcoming months.

Wonderful post, Chris! We are fortunate to have Black-capped and Carolina Chickadees. We really enjoy them! Thanks for the details on your blog!