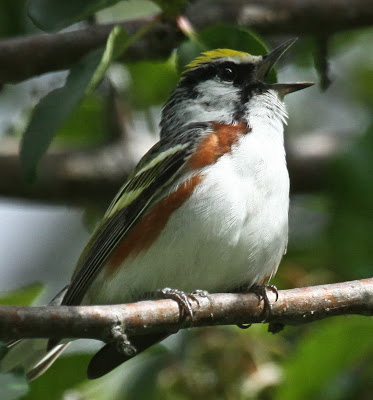 Last Saturday, our local Audubon chapter sponsored a “Warbler Walk.” A dozen people wandered the trails around Brattleboro in search of the tiny little birds known as wood warblers. By the end of the morning they had seen or heard fourteen. On several occasions, as they craned necks toward the tree tops, you could hear little gasps as binoculars found one of the elusive birds flitting among the leaves. Even more of a gasp came when the sun broke the clouds and illuminated the bird as it paused on a branch to sing.

The American wood warblers are a western hemisphere family, Parulidae. The family includes 25 genera and about 115 species, although taxonomy is an ever changing science, so don’t hold me to those numbers. 15 genera and 51 species can be found in North America, and the good news is that 70% of those can be seen in the eastern United States as breeding birds or regular migrants. Within Windham County, at least twenty species nest, and another half dozen migrate through.

The wood warblers are often spoken of as the jewels of North American birds; birders come from around the world to search them out. And for good reason - not only can they be a challenge to find among the foliage, but when found they often provide a visual feast. Many of the males are gorgeous, and the females aren’t bad either.

With a common name like “warbler,” one might think that the wood warblers are great songsters. Not necessarily. If you want a good warbling song from a bird, you should listen to the goldfinch, the Indigo Bunting, Warbling Vireo, or Rose-breasted Grosbeak, to name a just a few of the highly competent warbling birds who are not wood warblers. 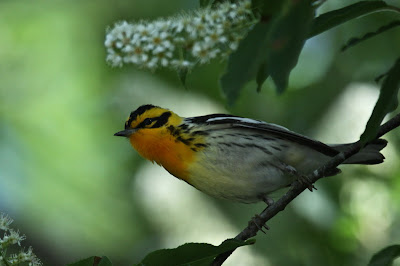 Some wood warblers are competent singers, like the Yellow, Chestnut-sided, or Magnolia, to name three. Many others have what I can only describe as a poor excuse for a song: thin, wiry, buzzy, whiny, or wheezy. But, for example, when the Blackburnian Warbler betrays his presence with his enemic, lisped notes, then pauses on a sunlit branch to repeat those notes, his throat blazes with fiery orange, and you can only be awed.

The term, “warbler,” was first applied to the Eurasian family, Sylvia, in the late eighteenth century; in general, these Old World warblers have attractive songs, or at least marked vocal powers” (Mullarney, et al.) The name, “warbler,” then became attached to the unrelated but similar appearing American family, Parulidae. 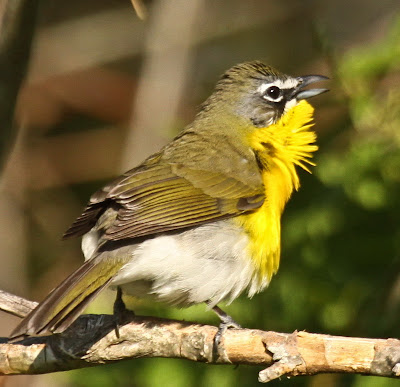 Like most families, the American wood warbler family is diverse. Its largest member is the Yellow-breasted Chat which neither looks nor sounds like a warbler. Found to the south of New England, this white-spectacled, chunky warbler scarcely acts like a warbler; vocally it sounds like a thrasher or catbird with hoots, gurgles, clucks, and whistles. 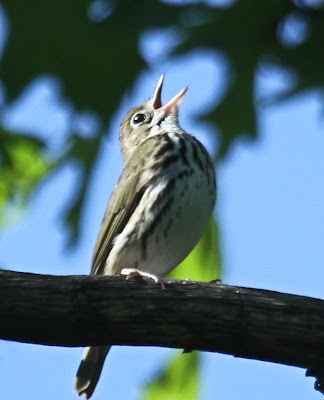 Three Parulidae are found in the dark beneath the canopy and like the chat do not look much like warblers. The Northern and Louisiana Waterthrushes are found, respectively, in still-water woodland swamps, and along fast moving streams. Both look like small Spotted Sandpipers, even to the persistent tail bobbing. But each has a musical ability that might be called a warble, and that a Spotty can only dream about. The ground nesting Ovenbird belts out “teach-er teach-er teach-er,” a song that resounds through the forest understory. Each Spring I listen carefully for the first song of the Ovenbird; it is reassurance that the cycle of life has successfully turned for another season and another year.

In general, the wood warblers are small songbirds (4-5 inches in length) with short, slender, pointed bills. Most are arboreal, living within a wooded environment in the mid to upper canopy, or in thick, brushy edges or thickets. Many are brilliantly colored, with yellow predominating. Bold black and white patterns often characterize the wood warblers. 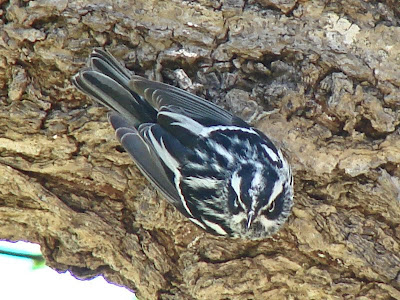 Most wood warblers glean leaves and tree limbs for insects and like manner of protein. In fact it is the abundance of this food source which impels these small birds to travel several thousand miles from their tropical homes to our temperate forests. In their genetic coding, they know that they will find the food resources to quickly raise their young. They are all adapted to exploit these resources, although the adaptations differ according to their favored habitat. For example, the Black-and-White Warbler forages along tree trunks and branches in a manner very similar to the nuthatches; its shape and behavior is so similar that it can be mistaken for a nuthatch if all one sees is the profile.

Two of the most common and accessible wood warblers are the Yellow Warbler and the Chestnut-sided Warbler. Both are also rather accomplished songsters and both are gorgeous. 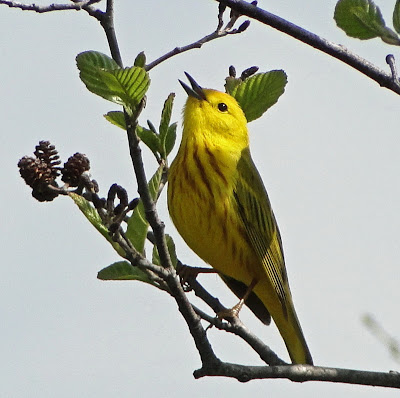 The Yellow Warbler sings at the top of thick bushes, in open woods, orchards, willow thickets, or along streamsides; it is usually not far from water: “Sweet, sweet, sweet, I’m-so-sweet!” He is brilliant yellow, with bright red streaks along his flanks; she is also yellow, but muted and duller. The Yellow Warbler is so common that many birders hardly give it a second look. What a loss! This piece of golden sunshine should be lingered over the way you linger over a fine vintage wine.

The same can be said for the Chestnut-sided Warbler. This active little bird likes the thick leaves of second growth woods and forest edge. With a golden cap, olive back, wing bars, black face stripe, white cheek, chin and breast, and bold chestnut stripes along its flank, this close relative of the Yellow Warbler also sings much like its cousin: “please ... please ... pleased-to-MEETch.”

Perhaps a little more difficult to coax into the open, this warbler is another of those fine vintage wines to savor and enjoy, especially when the males are singing forth on their territory.

When you are out in the woods at this time of year and get a good look - or even a fleeting look - at any of the American wood warblers, it is a redundancy to say, “Good birding.”

Hi Chris,
You got so many warblers, I'm jealous. I've seen the yellow warbler here last year but I would love to see the other one.

A case of great minds here, Chris. I just posted a blog with the ovenbird and waterthrush that I saw in Belize on April 14th. Great to find your post putting them in the context of their relatives!

PS - can you tell the Louisiana from the Northern waterthrush? I'm not sure which I got.

Chris. You are so lucky to have so many colourful Warblers. I have yet to see many of these in their 'spring' finery but who knows..one day. FAB.

Truly beautiful photos. I can't seem to keep up with the posts. Got some great pics, but not enough time to post. Glad you are sharing!