Monogamy Among the Birds 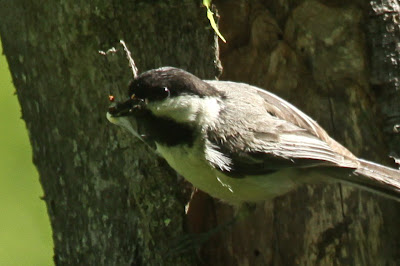 Last Saturday a small group gathered in the early morning for an Audubon field trip around a Dummerston marsh. Near the end of the slow amble (these trips can rarely be called hikes or walks), we stood looking at a gnarled cherry tree. About seven feet from the ground was a one inch hole. A pair of chickadees went to and from the tree, and in and out of the hole. They were carrying food. Inside the hole was a nest with hatchlings.

During the ten minutes we watched the hole, the chickadees made at least ten visits to their nest, probably more, since no one was counting carefully. They exhibited a hurried energy and focused urgency which left us catching our breath. When the group finally moved on, it find stimulus in a waiting coffee pot. 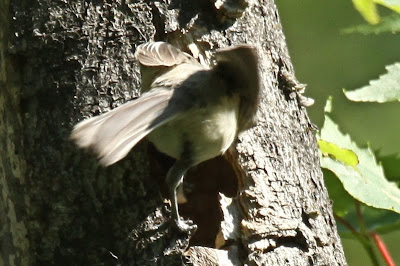 While watching a chickadee duck into the hole with a beak full of food, then fly out rapidly on another foraging trip, one of our group said something like, “That’s why birds are monogamous; it takes more than one to feed the young. Mammals are polygamous; only the mother feeds the young.”

That is a sweeping generality, and like all sweeping generalities, arguable at hundreds of points and with exceptions running all over the place. With that acknowledgment, however, let’s take a generalized look at the mammal side. Ancient potentates exhibited their power by maintaining huge harems. Wise King Solomon, for example, reportedly had 700 wives, plus 300 concubines, which makes me wonder how he ever had time to think up proverbs of wisdom. Indeed, that report presents a serious challenge to his supposed wisdom. Nevertheless, he did not have to spend any time with hands on child care.

Better evidence is even closer at hand. Polygamy may not always be evident among mammals, but the prevalence of single parenting appears to be the norm. Field mice, chipmunks, and squirrels on the small end, and deer, moose, and bear on the large end, all leave the raising of young to the diligence of the mother. She does all of the feeding on her own until her young can begin to care for themselves. If we wanted to argue that mammals are the most advanced evolutionary order, then we might also have to conclude that in this most advanced order, the male is only needed - only good - for one thing.

But let’s go back to the birds. It is estimated that more than 90 percent of all bird species are socially monogamous. That is, they form a pair bond for at least one breeding season and cooperate in raising young. The chickadees which we watched as they brought food to the hatchlings in the nest, bonded together a few weeks ago. In essence, they made a pact with one another to raise those young. When the hatchlings fought their way out of the egg shell, they were altricial - blind, naked, helpless, and voraciously hungry. With the untiring energy of the attendant pair of adult birds, in a few short weeks those hatchlings will leave the nest. Soon after, they will be independent and on their own.

The completely helpless condition of the young when they hatch necessitates social cooperation if anyone’s genes are going to survive. But this social cooperation, or social monogamy, is distinct from genetic monogamy. With the development of DNA studies, scientists are discovering bird species after bird species that engage in “extra-pair copulations.” Or in vernacular terms, they cheat on their spouse. 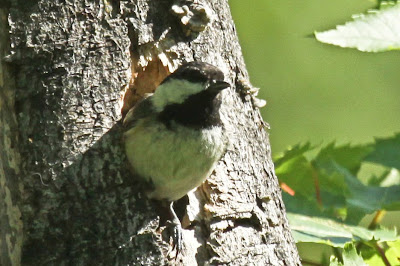 The female chickadee in the cherry tree nest hole laid 6-8 eggs. It is probable that the eggs she laid were fertilized by two or more males. Her partner may have fertilized the majority of the eggs, but it is unlikely that he fertilized all of the eggs. It is also possible that she did not lay all of the eggs. Though less common, females who may not have formed a pair bond, may drop an egg in someone else’s nest. Or maybe she has formed a pair bond, but drops one of her eggs in someone else’s nest anyway.

“One key characteristic of many socially monogamous species is that two parents must provide care in order to raise the young successfully. When both the male and female are necessary to provide adequate care, social monogamy is common.” (Sibley, Guide to Bird Life & Behavior)

There are, of course, many different strategies which different bird species employ during the breeding season. Hatchling shorebirds and waterfowl are precocial, able to feed themselves soon after hatching. A parent may have to protect them from danger; recently I watched a mother Mallard do an elaborate and energetic injured bird act in an attempt (successful) to keep me from looking for her young. A parent of precocial young may have to show them how to find food, but there is none of the frantic work that the chickadee parents engaged in.

Some species engage helpers, often a young bird from a previous breeding season, which stays with its parents and helps out. Corvids often use this cooperative strategy. The nesting crows in my neighborhood are three in number; I surmise a bonded pair and a helper.

The Brown-headed Cowbird is a very successful breeder without forming any pair bonds or doing any parenting. The species is a brood parasite. The female lays her egg in another species’ nest, and then takes off. The raising of the young is left entirely to the host parents. 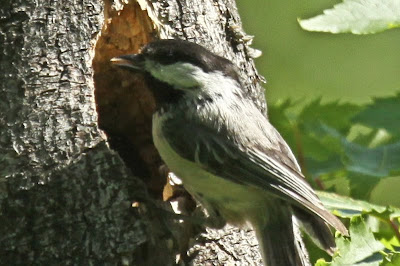 Social monogamy in birds develops when two parents are needed to raise the young. This is true for most songbirds, hawks, and herons. They are weak, helpless, and unable to maintain their body temperature. They need to be kept warm, fed and protected - a two parent job. A pair of adult birds contracts with one another to raise their young together for at least one breeding season, and perhaps many seasons. In general, the bonded pair are the genetic parents of most of the young they raise.

A couple of days after the Audubon amble, I returned to the marsh to watch the chickadees. They seemed aware of my presence, uneasy with me sitting 25 feet away and staring at their nest hole. They were nervous on the nearby branches, uneasy about flying to the hole and giving away its location. One chickadee lingered inside for a while, then poked its head out the hole. It stayed there, as though assessing whether I posed any threat or danger to its helpless young. Finally, it concluded that I was benign, and it flew off to forage. 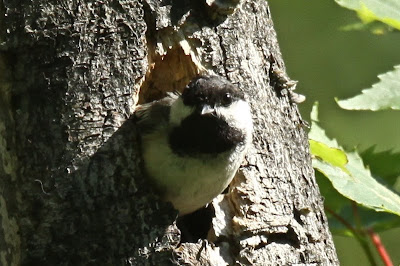 I did not stay for long as the chickadees were feeding their offspring. Even though I was just watching, they could do without my extended presence. Better that I spend my time advising my offspring how to raise their offspring. Unlike Solomon, I have the wisdom of experience.

Hi Chris, Interesting article - yesterday I saw chickadees feeding fledglings in my backyard, for the first time. I noticed they don't waste anytime at the feeders!
Also interesting is your line, "the male is only needed - only good - for one thing," because I've heard women say that because the male mammal leaves, it must mean she's only good - for one thing. All a matter of perspective, isn't it?
I really do enjoy your blog!

That last photo is so adorable!

Your blog is so interesting! I 've been observing nesting of several species in and near our yard. In more than one instance I've been puzzled by "extra" birds. For example, the pair of Couches'Kingbids that sit in a snag overlooking their nest are often joined by a third. It is too early in the year to be a young bird from an earlier brood.
Your post gives more to think about as I spy on my bird neighbors and speculate on their relationships!!

Good info. That could have been an article in any bird watching magazine.

God is amazing in His creation as Solomon proclaimed. I appreciate the vast info!