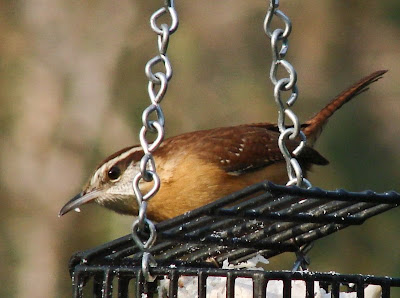 The Wren Family (Troglodytidae from the Latin, “one who creeps into holes”) consists of busy little brown birds who always seem to be up to something. Generally, they are not much to look at, but what wrens lack in the flashiness of their plumage, they more than make up for in the gaudiness of their songs.

With one exception, our local wrens are more likely to be seen than heard. The exception is the House Wren, and even he tends to stay hidden. While many birds will sing their song from a prominent perch, the House Wren usually stays hidden in the foliage. His incessant activity and abiding curiosity in our open backyards, allows us to see him as he hurries about his business.

There are four representatives of the Wren Family in southeastern Vermont: House Wren, Winter Wren, Carolina Wren, and Marsh Wren. 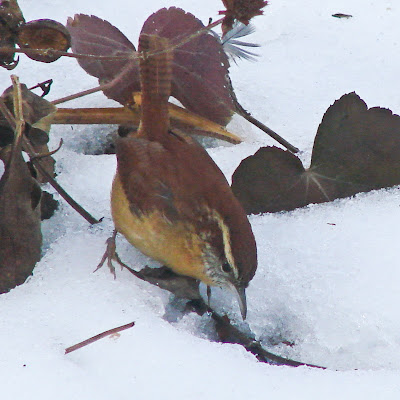 Carolina Wrens are the largest of our local wrens (5 3/4 inches) and also the most handsome, with a buffy breast and prominent while eye stripe. As their name implies, they are a southern species, though they have been extending their range northward. They have been nesting for a number of years in Brattleboro and the Connecticut River valley. They are moving up the river valleys; there have been nesting pairs in Williamsville and South Newfane for several years. They stay the winter (they are regulars on the Christmas Count) unless severe weathers causes them to withdraw southwards or does them in.

Marsh Wrens (size about 5 inches), inhabit reedy marshes. They epitomize the elusiveness of wrens. They are far more likely to be heard than seen. Occasionally, if you are lucky and very patient, you might see a Marsh Wren singing in the open, or glimpse one as it pops up to investigate some noise. But more often you will get only fleeting impressions as it flits furtively through the dense marshes. 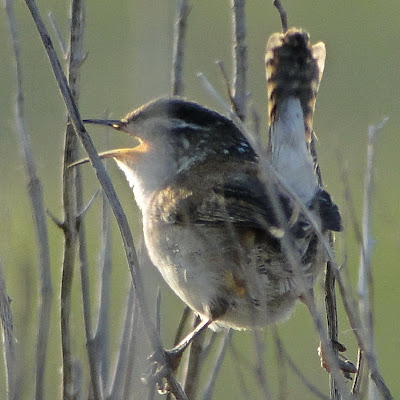 The songs of the Carolina Wren and the Marsh Wren have been extensively studied by scientists, and the results are astounding. Male Marsh Wrens have a song repertoire that averages about 50 songs per male in the East, about 150 in the West. One western Marsh Wren had 219 songs in its repertoire. “A male will cycle from one song to the next, moving through his repertoire in a fairly predictable fashion. Neighboring males often will engage in matched counter-singing. The two males will follow the same song series, one of them offering the song just given by his rival. The function of the counter-singing among Marsh Wrens is unknown, but observers have suggested that it may ‘normalize’ relationships between territorial neighbors, possibly reducing active aggression and the injuries that result from it.” (Sibley in “Bird Life”)

Carolina Wrens have smaller repertoires (about 32 songs per male) and use them differently. They sing the same song over and over - up to 250 times, then switch to another song. When encountering other territorial males, they switch songs more often. “Researchers hypothesize that matched counter-singing in the Carolina Wren calibrates the distance between two rival males. Since both males know how each song should sound, they can determine how far away their rival is by how degraded (by trees, brush, and incidental noise) his song sounds. Thus if a male gives a song known by his neighbor, he very clearly announces his presence and location on his territory, possibly preventing territorial incursions.” (Sibley) 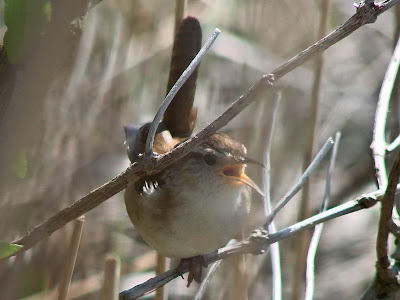 With such large song repertoires, how does one go about learning the songs? The Marsh Wren is the easier of the two. It has a “wren” quality to it: bubbly and rattled, but reedy. When you hear a wren, or a rather long, complex song, in a dense marsh (for example, the marshes in the Retreat Meadows or Herrick’s Cove), it is almost certain that you are hearing a Marsh Wren. The Carolina Wren is more difficult. It is very loud and clear-noted. Kaufmann describes the Carolina Wren’s song as “rollicking, full-toned chant, ‘liberty-liberty-liberty-whew.’ Many variations.”

Since both the Marsh Wren and Carolina Wren are members of the Family “one who creeps into holes,” they both nest in cavities, of a sort. 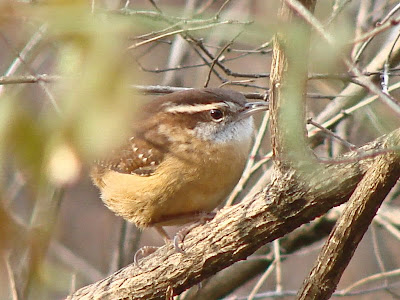 The Carolina Wren is “flexible” about the cavity in which it nests. It will choose a natural hollow in a tree or stump, an old woodpecker hole, the middle of a brush pile, a nest box, the crevice in a building, the shelf in a garage, and any other spot that may catch its fancy. The nest is often domed with a side entrance. Twigs, leaves, weeds, and many other material go into the bulky mass that makes up his home.

A cavity for a Marsh Wren is a bit more problematic. There are no logs, stumps, woodpecker holes, or convenient nest boxes dangling from branches in a marsh, and cattails, bulrushes, and marsh grasses hardly provide holes to be crept into. So what does the Marsh Wren do?

A few summers ago, I kayaked in the marshy mouth of the Missisquoi River in northern Vermont. Marsh Wrens were occasionally popping above the marsh grasses singing their reedy wren song, then dropping back down. I drifted with the desultory current along the edge of the grasses, catching glimpses of the wren as he popped here and there, hoping that he might give away his nest location. Searching through the thick, reedy vegetation, I looked for some anomaly. I found an oval brown mass, like the boil on a tree trunk, except this was attached to a cattail. Through binoculars I could see that it was intricately woven out of old wet grass and assorted marsh detritus. The wren continued popping here and there. One of his pops landed him on the top of the oval mass of grasses, a hop put him halfway down the side of the mass, and then he disappeared into the side of the mass. Inside, I later learned (from books - not from destructive investigation) the Marsh Wren’s artificial cavity was lined with fine grass, plant down, and feathers. 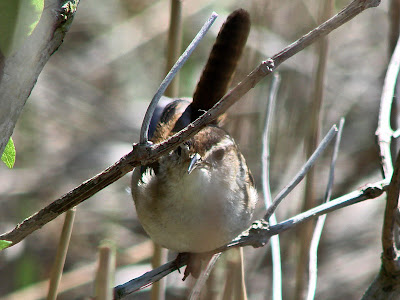 In the course of my drifting, I found two more Marsh Wren nests near the edge of the reeds. The homesteaders who had built these cozy nests vociferously protested my near invasion of their claim, but stayed hidden from sight.

Troglodytes - that avian family of the Wrens, the family of birds who creep into holes - always provide entertaining moments. Perhaps that’s why they are my favorite birds.

Email ThisBlogThis!Share to TwitterShare to FacebookShare to Pinterest
Posted by Chris Petrak at 6:00 AM
Labels: Carolina Wren, Marsh Wren, Troglodytidae

This is my third year birding & I've learned a lot from your blog. Great pics too!

Hi Chris,
Very nice and interesting post.. This Carolina wren is much more beautiful than our winter wren!! Beautiful pictures too...

I love wrens for the sheer audacity of the size of their vocals being so mismatched to their physical size. Great post!