I spent three days last week (Thu-Sat) in southern New Jersey, primarily Cape May. Timing could not have been better. A strong cold front came through Thu-Fri, producing a fall out which Cape May birders are describing with terms such as "epic." More on this when my weekly column is posted Saturday.

On Friday afternoon, I was walking the yellow trail in Cape May Point State Park when a birder (Blake Mathys) waved me over to see a Common Ground Dove. I loaned him my cell phone, and he called in his sighting. The word spread quickly. In less than half an hour, some thirty people had made the 10-15 minute walk to the area where the dove was seen. It was only the 3rd New Jersey record for this dove. Its North American range is Florida and southern Texas. 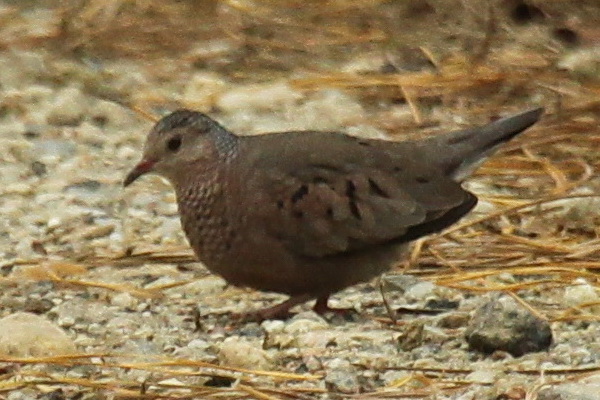 Wow cool... Congrats on these two lifers Chris. It is very nice to see new species. I love this sparrow, it is a very nice one....
Your right about our species and do not worry I also look at my guide very often when visiting your blog and some other from your areas... I'm still amazed about the look of several species that we call differently and that are not so different...
You're right, our redpoll is also carduelis flammea, but we also have the arctic redpoll that I happen to see for the first time this year....it is quite rare...
The goldcrest is indeed very similar to your kinglet, but as you said, not the same....
It is also cool to visit other birding blogs because you get more knowledge about the genus and their distribution....

Howdee Chris,
Lucky you! you were there during the Epic weekend...I have been reading about this all over the blogasphere and am quite jealous. Wish I was there.
Glad you got to see these great birds. Looking forward to your next post on Cape May.

Right time, right moment, how wonderful! Happy you were able to have this experience and then share it. Will check back on Saturday for your upcoming post :)

Well done!
It is always exiting to get to photograph rarities!
That was real luck and you took advantage of the whole situation!
Bravo!!!
Cheers, Chris!

...I've been reading about this "epic" event. Wonderful you were able to be there. I love seeing and hearing the little Henslow's. We have a small breeding population at a nearby VOA park, and I spend a good deal of time there seeking them out. Unfortunately, the beautiful grasses are in transition and succession seems to be winning out. It's a local rarity for us, and if the fields go...so too will my favorite little sparrow. Love your photo. I'm used to seeing them in grasses...cool to see him in a tree!

Great captures, Chris. I am envious. I only got a far-away glimpse of a Henslow's Sparrow once. Nice picture too of the Common Ground Dove.

Chris, congrats on your sightings. Sounds like a fun time birding in Cape May.

Chris: I'm Blake Mathys, the fellow who found the Common Ground-Dove. Thanks again for letting me borrow your cell phone, at least a few other people got to see it. I've put up a few pictures of it on my website, plus some other Cape May birding pictures. Take a look at the Recent Additions link at my website: http://blakemathys.com

It sounds like it was a great few days down there.

Nice photos - never have seen the henslow sparrow before but he's a nice looking fellow!

Wow. I guess everyone was surprised.

Thanks all for your comments. Took down the photo of the Henslow's because it is probably not a Henslow's - alas! a mis ID. Please see the next post. My sole encounter with the Henslow's is a distant shot, unless someone can next convince me that my first was in fact a HESP.