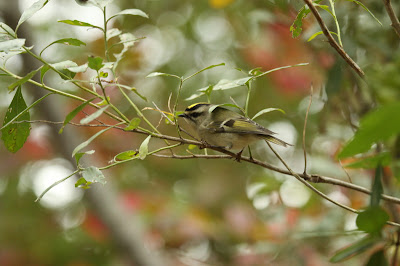 In the nineteenth century, German biologist Carl Bergmann theorized that animals which live in the far north are larger than animals that live to the south. Their larger size enables them to better conserve heat against the cold northern winters. Animals living to the south do not have the same heat conserving need, so they can be smaller. His theory became known as Bergmann’s Rule.

Unfortunately, the “Rule” is quickly subject to exceptions. North America’s largest land bird, the Wild Turkey, ranges south of the Canadian border. The smallest representatives of the grouse family, the White-tailed, Willow, and Rock Ptarmigans are year-round birds of the boreal forest or arctic tundra. And those large predators, the falcon and owls, depend upon the year-round activity of a very small mammal - the meadow vole. 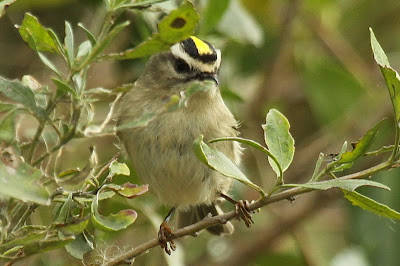 The meadow vole renders Bergmann’s rule moot. The final blow is delivered by the Golden-crowned Kinglet. The Golden-crowned Kinglet is the world smallest perching bird. It weighs about two tenths of an ounce (6 grams). It is so small that it has little to fear from most predators; the effort  to catch it does not pay enough calory dividends. This kinglet nests in the boreal forests, and some spend the entire year there. Those that wander south in search of food are usually found in the higher elevations and colder habitats of spruce and pine forests.

Golden-crowned Kinglets can be seen, or more likely heard, in our forests throughout the year. In winter, they may be foraging through any coniferous stand. In summer, they are usually in the conifers of higher elevations.

Most of our year round birds are feeder birds. Chickadees, nuthatches, titmice, various finches, and wintering sparrows frequent backyard feeders where they can get the high energy food they need. My feeders seem especially active when a storm is pending, or the temperatures are very low. 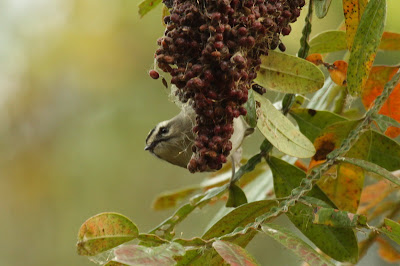 But a few birds do not make the seasonal shift to a vegetarian diet. You do not see the Golden-crowned Kinglet at your bird feeder. Nor do you see the Brown Creeper. You might see the latter working a nearby tree trunk, and you might hear or see the kinglet in nearby pine trees. Both stay with an insect-based diet throughout the year.

Go for a walk on the coldest day of the year. Every so often, uncover your ears and listen for a high, thin, buzzy, “zree” or “zee-zee-zee.” Then start looking carefully. These tiny, olive colored birds move quickly through the pines and spruces, fluttering wings, hanging upside down as they look for something in the pines and spruces to sustain them. If you are lucky, one may stay put long enough for you to focus your binoculars, if you have them along and can figure out how to keep them from fogging up when brought to your eyes and near your warm breath.  If you are really lucky, you may even see the gold crest on top of the head. But the kinglets are too busy in their urgent task to linger more than a moment before moving on. 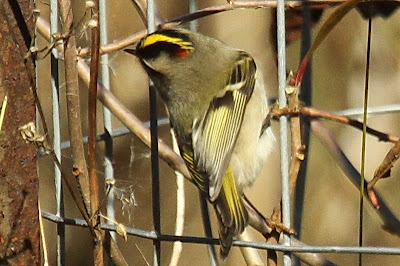 Bernd Heinrich, UVM biologist, was curious about what the kinglets were eating. In Winter World (2003), he describes his pursuit of the kinglet and its food in Maine and Vermont woods over several winters. Analyzing the contents of the kinglet’s gizzard, he discovered that they were eating “inchworm” caterpillars. Caterpillars wintering on trees had been unknown. It took him several years  to find the caterpillars and then to raise them to the “well-known, one-spotted variant moth (Hypagyrtis unipunctata).” Heinrich’s persistence discovered the principal winter food source of the Golden-crowned Kinglet, and that a particular moth larvae winters on tree branches and not - like similar species - deep underground where frost does not penetrate. 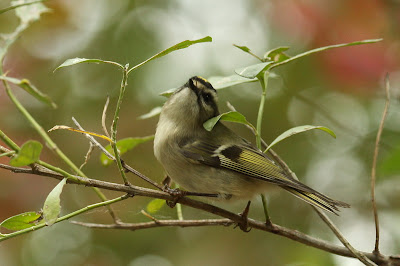 The kinglet can survive night temperatures of -40F, but it is always close to the edge. A severe winter storm can prove fatal. Heinrich concludes that the kinglet “has no magic key for survival in the cold winter world of snow and ice. Those that live there are lucky and do every little thing right. The odds of surviving the winter are slim ....”

And yet, the kinglet population holds its own, unlike so many species whose numbers are under stress. The kinglet begins nesting in early April, when weather in the northern forests can still be a very dicey and icey. Most songbirds in New England lay four to five eggs. In its tiny, insulated nest hung beneath the protection of evergreen branches, the kinglet lays eight to eleven eggs in a double layer.

A few years ago, amateur ornithologists in Minnesota discovered another secret to the survival of the kinglet. And that is, that while the male is busy feeding the young nestlings, the female is incubating a second clutch with just as many eggs. These very busy parents successfully fledge eighty percent of their young.

The diminutive Golden-crowned Kinglet experiences heavy mortality every winter; it survives by replacing its lost population every summer. 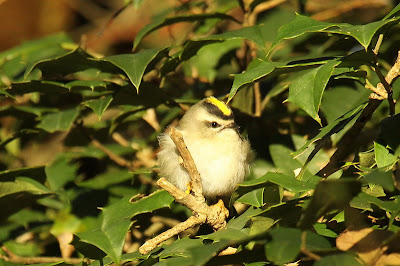 Mother Nature is a harsh parent. There is no benign sentiment. Primitive peoples recognized the forces of nature as forces to be placated. The forces were not tame, and seldom benevolent. When we watch our feeders from the warm comfort of our homes, we are still watching the struggle to survive against those forces. Some birds are perhaps experiencing some benevolence they have not previously known - benevolence in the abundant seed we are providing. But they still must do everything exactly right, and then be lucky.

And yet, for all the starkness, and struggle, we see through our windows, there is life. Beneath the snow pack, there are tunnels and roads made by the voles. On a warm winter day, the birds burst into song and the bees fly. As impending Spring brings the thaw, the snow drops blossom, and bloom follows bloom. Mother Nature may not be benevolent, but she has an irresistible urge to life.

The winter landscape may often seem bleak and lifeless. But moving through the dormant green pine boughs, winter’s elf, the Golden-crowned Kinglet, calls  “zee-zee-zee.”  It is talking with its own about food, and the next stop, and shelter. And perhaps also, it is talking to us about life waiting to happen.


Note: Unfortunately, I have no photographs of the Golden-crowned Kinglet in winter. The last photo was taken in June on the Gaspe Peninsula when the kinglet was in the midst of its breeding season. The other photographs were taken in late October in Cape May during the song bird fall-out when both kinglets were common.

Email ThisBlogThis!Share to TwitterShare to FacebookShare to Pinterest
Posted by Chris Petrak at 6:00 AM
Labels: Golden-crowned Kinglet

Chris, wonderful post on the Golden Crowned Kinglet. They are such cute little birds. I love to watch them.

Great essay and photos. I think with animals you might add the knowledge of how to get water in a frozen environment. Boom is a malamute an ice flow dog and eats clean snow or ice when he is outside with me in winter. Not only is his fur thicker, but his knowledge of safe ice conditions and how to get water shows years of selective breeding in a hostile climate.Would the water thing apply to birds?

very nice post and photos Chris. A tough bird to photograph so well.

Really interesting- I didn't realize how much these little guys overcame to survive!

Chris -- What a marvelous post -- from start to finish. I felt layers in your words of; survival, food, society, urge to life and shelter. Not only are these for the Golden-crowned Kinglets but for all life forms. Excellent -- barbara