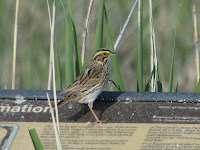 #21 Savannah Sparrow - a slimmed down Song Sparrow; this breeding adult show the yellowish lores very clearly - not always so obvious.

#22 Song Sparrow - default sparrow - and one which we should learn to identify without reference to the "stick pin" on the breast. 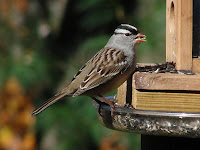 #23 - White-crowned Sparrow - adults are handsome birds! They look like they're dressed for a party. More common in the West; in my neighborhoods, a transient in spring and fall.

#24 - White-throated Sparrow - here's an example of why we should ignore those breast spots, especially when identifying Song Sparrows - this bird has a breast spot. Stubby appearance, white throat, and (in this instance) bright yellow lores make the ID.

#25 - Swamp Sparrow - usually a helpful ID clue for this bird is its habitat - in marshes and swamps. But this bird was in a grassy field during migration. So you need to know about the gray collar, the buffy-brown flanks, the partial eye line, and the reddish brown crown (not the rusty- red of the Chipping Sparrow).


Now the reminder at the beginning of Exercise 6 - many Little Brown Jobs are sparrows, but not all LBJs are sparrows.

#26 - Brown-headed Cowbird, female - One of those birds we love to hate, and about as nondescript as any bird can be. Bigger than most sparrows.

#27 - Blue Grosbeak, female - A rich golden brown, big beak. Her mate is sometimes confused with an Indigo Bunting, but he's bigger and has more rust on the wings. 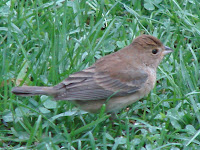 #28 - Indigo Bunting, female - a plain little bird, but with just a hint of blue in the wings

#29 - Rose-breasted Grosbeak, female - Her mate is so distinctive and so different, that she can be overlooked. Size, shape, bill, all take her out of the sparrow category. Bold head pattern is suggestive of the female Purple Finch, but much more striking.

#30 - Pine Siskin - but let's be honest, in this pose the plumage is very similar to that of the female House Finch, and the yellow wash on the wings is not visible. Plus the head shape is not that of the finch, and the the bill is pointed.

Email ThisBlogThis!Share to TwitterShare to FacebookShare to Pinterest
Posted by Chris Petrak at 12:00 PM

I'm learning thanks to your photos. Identified a cow bird -- I guess I'm supposed to hate him or her. I really know he is plain and I know he lays eggs where she is not supposed too but maybe it does some good things in nature also? -- barbara

...this has been a fabulous series you've had going over the past week. I've loved it.