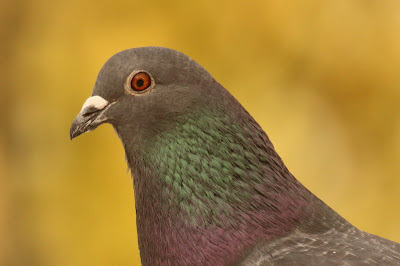 The Latin livia means blue, blue-gray, or lead colored, a reference to the Rock Pigeon’s predominantly bluish plumage, although its color variations are many. The “rock” of its common name refers to its preferred nesting habitant in the wild on rocky places.

The Rock Pigeon is one of three species introduced to North America which has become abundant. All three are generally disliked by birders because they “don’t belong,” and displace native species. The three species are tough and adaptable birds which can tolerate and thrive in association with humans. The House Sparrow and European Starling were wild birds which were released from their cages in New York City (the House Sparrow in 1851, the starling in 1890) and which quickly adapted to life in the new home. Both spread rapidly and are abundant year round residents throughout most of North America.

A bird or animal is said to be domesticated when it has been tamed and can live in or around human habitation and with human care. There is usually some change from wild form, often the result of controlled breeding in captivity. The most familiar domesticated birds are chickens, ducks, turkeys, and some geese. Controlled breeding changes a bird’s wild ancestor into a bird that may have more meat, lay more eggs, or produce more feathers.  We are familiar with these domesticated birds because we regularly consume them, or their eggs, or use other by-products from them.

But how many of us know that the Rock Pigeon was (probably) the first bird to be domesticated? There is evidence that people bred domestic pigeons during the Neolithic Age beginning around 8500 B.C. The earliest proof of domesticated pigeons dates from about 4500 B.C. and comes from terra-cotta figurines found in what is today modern Iraq. It is thought that pigeons were first raised in captivity for their meat.

However, pigeons have a remarkable homing ability. They can find their way back to their nest or pigeon cote from hundreds of miles away, regardless of the direction they have traveled or have been transported. They are rapid, and seemingly, tireless flyers.

We are all aware of the thousands of miles that many birds travel during migration and their ability to navigate those vast distances. But nowhere in the Rock Pigeon’s native, wild range do they migrate. They may move relatively short distances during seasonal changes and in response to food needs, but they are not natural, long distance travelers. How is it then that pigeons have such a strong homing ability. This homing ability is not well understood. An ability to navigate by the sun, moon or stars has been suggested, as has an ability to sense magnetic fields (a more likely explanation).

As human groups made the transition from hunter-gatherers to agricultural societies, food surpluses meant more leisure that had to be filled by the idle hands of emerging elites. Towns and cities developed and commerce developed. Donkey caravans traveled long distances and trading centers sprang up. I would imagine that many of those early traders carried cages of pigeons with them as a source of convenient fresh meat. Some of those birds escaped. The caravan master returned to his home base and discovered that the escaped pigeons had arrived long before he did. From the discovery of the pigeon’s homing ability, it was but a short step to employing the pigeon as a messenger carrier. At least, that is how I surmise that the domestic pigeon made the transition from domestic meat source to rapid communication medium. What is clear is that homing pigeons are known from Mesopotamian cuneiform tablets and Egyptian hieroglyphics by around 3000 B.C.

In human societies, the pigeon was the most rapid means for communicating over long distances, its speed unsurpassed until Samuel Morse’s invention of the telegraph in the mid-1830s precipitated the modern communications revolution. For most of human history, the pigeon was the instant messenger, the cell phone, the blackberry, relied on to deliver messages quickly.

The results of the Olympic Games were carried by pigeons to the Greek city states. In the fourth century, Alexander the Great used homing pigeons to keep his capital informed of his progress.  Julius Caesar reported to Rome his conquests in Gaul with carrier pigeons. In the sixteenth century, there were pigeon postal services available for a fee, just as local and long distance telephone service is available today for a fee. When Napoleon met his Waterloo, the news reached the English banker, Rothschild, by private pigeon post four days before horse and ship were able to convey the victory to the city of London. Reuters News Service began on the wings of carrier pigeons.

American forces employed about 5,000 pigeons during World War I, and over 36,000 pigeons served during World War II. In October, 1943, British forces moved rapidly to take back an Italian village, but were then threatened by an impending American air raid. A message was affixed to the leg of G.I.Joe and he was tossed into the sky. The pigeon arrived at the American air base minutes before the squadron of bombers took off, sparing a thousand British soldiers from friendly bombardment. The lord mayor of London awarded G.I. Joe with the animal equivalent of the Victoria Cross. The pigeon hero was retired to the army’s Pigeon Hall of Fame in New Jersey where he lived peacefully in retirement to an elderly eighteen years.

The pigeon population in cities around the world almost certainly traces to domestic pigeons gone wild. Romans not only employed them as messengers, but wealthy Romans loved their meat. Dovecotes abounded, but a carelessly tended cage meant escapees. Escapees were accustomed to human presence and soon resided abundantly in the cities where they had once been caged.

Hence the presence of pigeons in North America. They were probably introduced first by the French at Port Royal, Nova Scotia, in 1606, then by the English in Virginia about 1621 and in Massachusetts in 1642. It is unlikely that these pigeons were brought across the Atlantic as homing pigeons for communication with Europe. Pigeons do not like to cross water and when released at sea head immediately for the nearest shore. They were probably brought as a food source, just like chickens. Some escaped, and their descendants, still tough and adaptable, line building ridges in downtown Brattleboro, clean debris off the streets, and peck seeds at my feeders.

Two sources were important for this column: “Encyclopedia of North American Birds” edited by John Terres (1980), and “Pigeons” by Andrew Blechman (2006).

Email ThisBlogThis!Share to TwitterShare to FacebookShare to Pinterest
Posted by Chris Petrak at 6:00 AM
Labels: Rock Pigeon

These birds did play a vital role in the wars we have had.

I have a deeper appreciation of pigeons now. An interesting history. -- barbara

I'm learning too much here!
I like it though...thanks!

Got a few too many pigeons hanging out in your yard? Check out pigeon removal in New Jersey