Alexander Wilson immigrated to America from his native Scotland, a failed poet and political rabble-rouser. John James Audubon immigrated from France, sent to America by his father in order to avoid Napoleon’s draft. Wilson settled in Philadelphia. Audubon went to Millbrook outside of Philadelphia, an estate owned by his father. Wilson tried many jobs, none with much success. Audubon tried to be a merchant, consistently failing. Wilson managed to befriend prominent and well-to-do Philadelphians who encouraged his study of birds. Audubon gained entrance to many of Philadelphia’s prominent circles through his father. Wilson conceived his “American Ornithology” and gained the support of his prominent friends, even though he knew little about drawing and painting and was unable to identify many birds. Audubon preferred wandering the woodlands rather than being a merchant, collecting specimens, and painting watercolors of the birds he collected.

Wilson undertook long journeys throughout the eastern states and territories studying and drawing birds. Audubon traveled extensively throughout North America and the northern hemisphere studying and drawing birds. Wilson worked with an American printer, did his own engraving, traveled extensively to sell his work by subscription, and completed seven of nine volumes. He died prematurely, leaving volume eight to be published posthumously and volume nine to be written by a friend. Audubon went to England to publish his “Birds of America,” engaging a prominent London engraver. He sold his work by subscription. When the double elephant folio was complete, he published a smaller octavo edition, also sold personally by subscription. This seven volume work eventually was issued nine times. 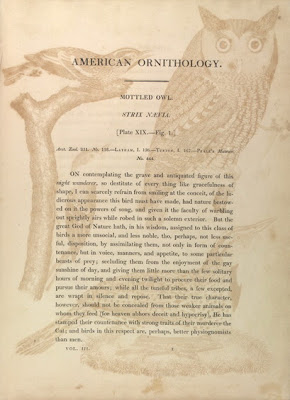 Wilson is known as the father of American ornithology. Audubon is synonymous with birds throughout the world. Wilson was a poor draftsman and artist. Audubon was a talented and creative artist.

Wilson and Audubon shared the Philadelphia area as their home base, but their paths never intersected there. They met one time. Audubon was a merchant in Louisville, Kentucky, on his way to a business failure. Wilson’s journals from the time of their meeting in 1810 have been lost, though there are accounts written by Wilson’s friends who were also Audubon’s enemies. These tell of the two men meeting, and going hunting together for two days.

Audubon recounts the day when Wilson came into the counting room with two volumes of Ornithology under his arm. Wilson showed Audubon his work, and Audubon was ready to subscribe. Aubudon’s partner dissuaded him, telling Audubon (in French) that his drawings were far better than Wilson’s. Audubon did not subscribe and Wilson was miffed. Audubon showed Wilson his own portfolio which purportedly held almost two hundred paintings.

According to Audubon, Wilson was relieved to learn that Audubon did not intend to publish his paintings. On the other hand, it may be that this meeting planted the idea in Audubon’s mind of publishing his work.

What is certain is that this single meeting led to a rivalry between the two men, a rivalry  which arose mainly after Wilson died in 1813. The rivalry revolved around charges and counter charges of plagiarism.

Wilson’s “American Ornithology” included a drawing of a “Small-headed Flycatcher.” Audubon claimed that Wilson copied from his drawing which he made in 1808. It is certainly possible that Audubon showed his drawing to Wilson in 1810, and Wilson, never having seen the bird and needing a record, made his own drawing based on Audubon’s. The “Small-headed Flycatcher” at the center of the controversy was an immature, warbler-like bird. Here’s the irony in the controversy. Today, nobody knows what the bird is. No one has seen or recognized the bird since Audubon - or Wilson - encountered it and drew it.

The charge of plagiarism leveled by Audubon against Wilson had repercussions. Friends of Wilson came to his defense by pointing out that some of Audubon’s paintings were remarkably similar to some of Wilson’s painting.  “Why Audubon, an infinitely superior draftsman, should have been tempted to copy Wilson is mysterious, but the resemblance between his Bald Eagle, his Mississippi Kite, and his Red-winged Blackbirds and the indisputably prior drawing by Wilson of these species is beyond coincidence.” (Leahy, Birdwatcher’s Companion)

Scott Weidensaul in his history of American birding, “Of a Feather,” summarizes the quality of Audubon’s painting: “no one had ever brought such vitality, such raw emotion and surging power, to the painting of birds. Audubon smashed centuries of artistic convention, packing his birds among lovely vignettes or fully realized landscapes .... They were not generic, paste-board silhouettes, although Audubon drew a few of those, too, especially ones he lifted from Wilson.”

One wonders what the results might have been if these two geniuses, one in ornithology, the other in painting, had managed to collaborate. In those days of slow travel and slow communication, the logistics of such theoretical collaboration are hard to imagine. Then there would have been ego; “no one held a higher opinion of Audubon than Audubon himself.” (Weidensaul) There is not much room in any room for one big ego, let alone two.

Wilson and Audubon are fascinating personalities who made pivotal contributions on the literal frontier of early nineteenth century America, and on the frontiers of science, natural history, painting, and learning in the robust and emerging culture of the New World.

Chris -- very interesting about Wilson, had not known of this connection between Audubon and Wilson. Of course if Audubon had not had a wife that taught school so he could pursue his career and a woman artist friend who contributed to his paintings he perhaps might not have become as successful. Your post is very informative and revealing -- barbara

Another wonderful post.
Hmmm..I, too am a rabble rouser...and a birder...oh wait, I forgot about the talent part...never mind.
Thanks for the info Chris.

Both had immeasuarable talent. Its true that each borrowed from the other. Still, Wilson set the wheels in motion for Audubon to continue his work with renewed vigor. No man is an island to himself. Each made enormous contributions. Human history is always multifaceted, but some facets get most of the light. I have a tyrant flycatcher print by Wilson and a red shouldered buzzard by Audubon. As an illustrator myself, I find great artistic merit in both. Draftsmanshio alone does not make for great art. Pleasure, and the joy of natural pictorialism with no undo ornamentation is a hallmark of both artists. What more can be said other than assumptive controversy?