The Life of the Blue Jay 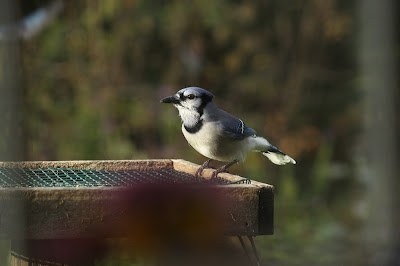 During the last week, I’ve had a couple of people tell me that they do not like Blue Jays. I responded that the reason so many people don’t like Blue Jays is because they are smarter than we are.

That Blue Jays are smarter than humans may not be strictly true - although I am not always very impressed by the intelligence exhibited among my species. What is true is that Blue Jays, as members of the Corvidae family, have one of the highest degrees of intelligence among the birds. The Corvids, which include crows, ravens, jays, and magpies, have astonishing memories and exhibit the ability to solve problems. Naturalists have recognized for years that members of this family have languages of their own. When we listen to Blue Jays, we hear a wide variety of calls, clucks, gurgles and bubbles. The variety and complexity of these sounds - noises we sometimes call them - is more correctly described as their “language” by which they communicate issues of concern among the Blue Jay population. 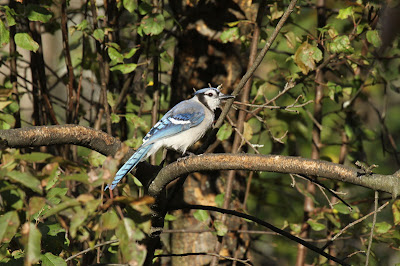 The “jay” of the Blue Jay’s name probably derives ultimately from the attempt to imitate the sound that the “jay” birds make. As with many word derivations, there are alternatives. One alternative is that “jay” derives from the French, geai, so named for the gay (bright) plumage. Another suggests that it is a nickname, or short form, of Gaius - a common first name among the Romans, as in Gaius Julius Caesar. 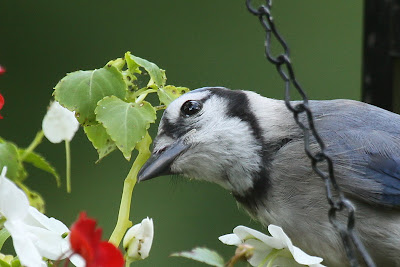 In addition to its reputation for being noisy (a well-deserved reputation), the Blue Jay has been labeled a nest robber, a bird which consumes the eggs and nestlings of smaller song birds. John James Audubon established this reputation with his painting, showing three Blue Jays consuming eggs, and with his anecdotal observations and reports of the Blue Jay’s predations. This reputation has been sustained by many writers ever since.

But the evidence does not sustain the reputation. Arthur Bent in his life history of the Blue Jay, sites a study of the diet of the Blue Jay done in 1897. A researcher collected 292 stomachs in every month of the year from 22 states. He found that the Blue Jay’s diet “is composed of 24.3 percent animal matter and 75.7 percent vegetable matter .... The animal food is chiefly made up of insects, with a few spiders, myriapods, snails, and small vertebrates, such as fish, salamanders, tree frogs, mice and birds. Everything was carefully examined which might by any possibility indicate that birds or eggs had been eaten, but remains of birds were found in only 2, and the shells of small birds’ eggs in 3 of the 292 stomachs.”

The researcher concluded: “The most striking point in the study of the food of the blue jay is the discrepancy between the testimony of field observers concerning the bird’s nest robbing proclivities and the results of stomach examinations. The accusations of eating eggs and young birds are certainly not sustained ....” 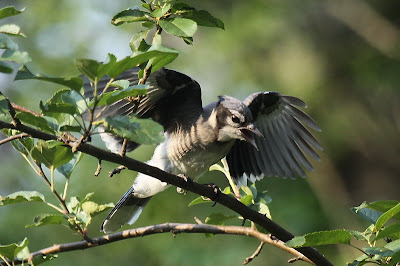 Blue Jays begin their breeding sometime in mid-May when the adult pair begin building their nest, a cup made of twigs, bark, rootlets, grass and perhaps paper, rags, and feathers. It looks something like a robin’s nest, and there is at least one report of Blue Jays expropriating a robin’s nest, to the chagrin of the robins. The two and a half week incubation is done almost entirely by the female; the male feeds her, and on occasion may spell her on the eggs. When the naked and helpless hatch, feeding is done by both parents. Eyes open after five days; feathers begin to form after a week.

By the time they are three weeks old, the young leave the nest, and the period of Blue Jay quiet is at an end. Young noisily call for their parents and then chase their parents. This continues for about three weeks. When the young have learned to feed themselves, Forbush writes, “the family roams through the woods, reveling in the plenty that nature has provided for them; they are joined by others and it is a noisy rollicking crew.”

Blue Jays can be relatively long lived. Banding records have yielded ages up to 15 years, and there are many records of banded Blue Jays living 6-9 years. 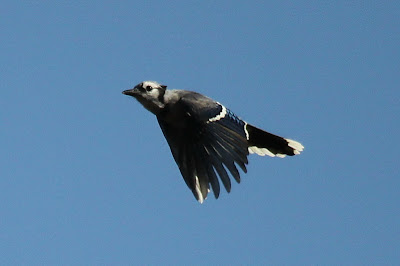 Blue Jays migrate. I have been on Putney Mountain in the Fall and have watched as hundreds of Blue Jays flew across the opening on the crest of the ridge during early morning hours. But there is very little known about their migration. Banding records indicate the movement of Blue Jays from  (for example) Massachusetts to North Carolina and New York to Virginia. But Blue Jays are also found year-round throughout their breeding range. Are the birds which we see in the winter birds which bred in our area, or are they birds which have migrated from some other breeding area, presumably further to the north? We don’t know. 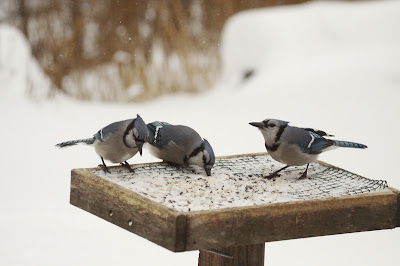 A few years ago a friend in Marlboro tried banding winter birds with color bands so that he could identify them by sight during Spring and Summer. He saw some of the winter birds as breeding season began. Unfortunately, he was not able to continue the study, and few Blue Jays were among his banded birds. So the answer is still unknown, although the means of doing the study is there for a future researcher.

Blue Jays, like their Corvid cousins, cache food for later use. They have wonderful memories, but not perfect memories. (Alas, who does?) They often store one of their favorite foods, acorns, in soft soil. Unretrieved, the acorns sprout. Nancy Henry of the Highlands Nature Sanctuary in Ohio discovered that this caching of acorns by Blue Jays made them welcome partners in her reforestation efforts: “When it comes to industry and ingenuity in our own backyard, there is no better forester among the animals than our boisterous friend of the deciduous forest, the bluer-than-blue blue jay of Eastern North America.”

I have attempted this week to keep most “human elements” out of this column - those things which lead to such descriptions as rogue, thief, lawless, haughty, and boisterous, and which make the Blue Jay such a welcome and entertaining habitue of my feeders. Just the facts, you might say. 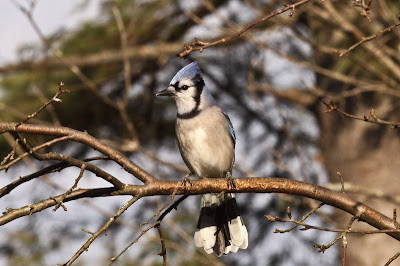 But I can’t resist finishing with a quote from another Blue Jay fan: “There’s more to a jay than any other creature. You may call a jay a bird. Well, so he is, in a measure, ’cause he’s got feathers on him and he don’t belong to no church perhaps, but otherwise he’s just as much a human as you and me.” So wrote Mark Twain. Good birding!

Email ThisBlogThis!Share to TwitterShare to FacebookShare to Pinterest
Posted by Chris Petrak at 6:00 AM
Labels: Blue Jay

Beautiful message Chris and nice description of this bird life. Talking about noisy bird I think the most noisy I met was the nightingale ;-) Is the blue jay more noisy?

A most wonderful post, Chris! I learned something new today after reading your very interesting, informative blog. I'm always delighted when a the Blue Jays visit our bird bath ... beautiful birds!

Very Interesting Jay info. Wonderful photos I might add. Found you via Folksway Notebook. I have been watching the Blue Jays carrying walnuts from a spot they collect at the bottom of our yard here in Western Kentucky. Have not been able to follow them to see what they are doing with them. It could be they are burying them too. I would have never thought of that. Will check back often.

I got a little from your post, but blue jays are stealing or stole all my pecans this year! They must return every 15 minutes for another one. Multiply that by 30 trips a day by 14 birds that’s a potential of 300 nuts a day. I’ve seen 25 squirrels in a pecan tree a few years back. I have a pecan tree 87 feet high and all my life I thought it never produced. 8 years ago I noticed on Wed Aug 11th the tree was full of pecans. I said to my self this is a bumper crop, When I got off work Saturday to check the tree again the ground was full of green inedible nuts (green nuts can kill children because of hydrochloric acid). I can’t even say the next nightmare, the tree was empty. Blue jays can stash on average 3000 nuts a season.
After killing 30 squirrels, and 12 blue jays I had nothing to show for it. Squirrels are defiantly smarter than blue jays. Squirrels will learn to jump from neighboring tree, if he misses from 65 feet up he’s on his legs and gone in a second. Some will jump on the tree and in 20 seconds pick a nut and jump off tree if they know I have a crack in back door open. Blue jays will always holler to let the world know they are there (waiting for their friends to arrive).
After a while they will put there warning call out even across the street when I go out the front door to go to my shooting perch. Squirrels holler across street at me also (300 feet away). Crows are a little smarter and will catch a nut in flight so I have no chance of shooting at them. Blue jays will sometimes enter the tree from the bottom and work their way to the top. After a blue jay knows their worst nightmare is behind a trailer door, they will linger only a few seconds on the tree, before flying off with theirs now or was my precious cargo.
I do not understand why all these creatures risk their life for some nuts and so many other acorns or other trees around. I know my nuts are one of smallest and hardest to shell, but bear every year and definitely the nuts with most tasty with so much oil in them (maybe they know also-no other nut is as good as my nut tree). How does a squirrel know that August 15 every ear to show up on my pecan tree? I keep aluminum flashing wrapped on bottom 6 feet of tree to keep squirrels from easy access. Can they smell them, or do they have a build in “wish I had a pecan clock” build in them like a pregnant woman who wants some special treat!