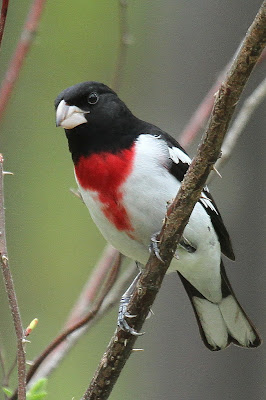 John James Audubon began his account of the Rose-breasted Grosbeak with these unusually poetic words describing his night encounter:

“One year, in the month of August, I was trudging along the shores of the Mohawk river, when night overtook me. Being little acquainted with that part of the country, I resolved to camp where I was; the evening was calm and beautiful, the sky sparkled with stars, which were reflected by the smooth waters, and the deep shade of the rocks and trees of the opposite shore fell on the bosom of the stream, while gently from afar came on the ear the muttering sound of the cataract. My little fire was soon lighted under a rock, and, spreading out my scanty stock of provisions, I reclined on my grassy couch. As I looked around on the fading features of the beautiful landscape, my heart turned towards my distant home, where my friends were doubtless wishing me, as I wished them, a happy night and peaceful slumbers. Then were heard the barkings of the watch-dog, and I tapped my faithful companion to prevent his answering them. The thoughts of my worldly mission then came over my mind, and having thanked the Creator of all for his never-failing mercy, I closed my eyes, and was passing away into the world of dreaming existence, when suddenly there burst on my soul the serenade of the Rose-breasted bird, so rich, so mellow, so loud in the stillness of the night, that sleep fled from my eyelids. Never did I enjoy music more: it thrilled through my heart, and surrounded me with an atmosphere of bliss. One might easily have imagined that even the Owl, charmed by such delightful music, remained reverently silent. Long after the sounds ceased did I enjoy them, and when all had again become still, I stretched out my wearied limbs, and gave myself up to the luxury of repose. In the morning I awoke vigorous as ever, and prepared to continue my journey.” (Birds of America, octavo edition, 1871.) 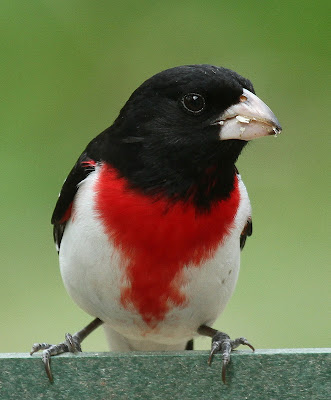 Audubon was enamored with the beauty of the Rose-breasted Grosbeak - both its song and its plumage. I can hardly disagreed. Of the two dozen or so species which regularly visit my feeders during the summer, the two summer grosbeaks, Rose-breasted (Cardinal family)  and Evening (Finch family), are the ones which arrest my attention every time they appear.

The plumage of both is stunning, though very different.  But if you add the respective songs into the mix, then I have to tip the balance in favor of the Rose-breasted Grosbeak.  The Evening Grosbeak hardly has a song worthy of the term. The Rose-breasted, by contrast, sings like a robin who has taken voice lessons. When you hear a robin singing with fewer pauses and with particularly clear, liquid phrases, check the tree tops for the Rose-breasted Grosbeak. 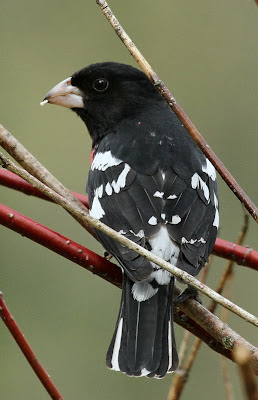 The male Rose-breasted Grosbeak is a handsome specimen. On his wings, back, and tail he presents a contrast of black and white. When I startle birds from my feeders with my sudden appearance, and see only a bold black and white pattern disappearing into the trees, I know that I have just scared him away.

But the breast is what catches the breathe. Beneath the dark, black hood covering the head, his breast is rose-red - a rose-red that often evokes the poetic, and even the tragic. The lower tip of the triangular rose-red often runs down toward the white belly, leading some to liken him to a jilted lover whose heart has been broken. His heart has been pierced by a cruel arrow, and he bleeds out his love.

From a harsher and more violent era, his folk name has sometimes been Throat-cut.

I prefer to imagine him a groom dressed for his wedding - tuxedo clad with a brilliant cummerbund to balance formality with gaiety.

All such imaginings are, of course, nonsense, although the nonsense prevails in the scientific name. The Rose-breasted Grosbeak is Pheucticus ludovicianus. Pheucticus, from the Greek, means “painted with cosmetics,” suggesting that his breast has been rouged; ludovicianus means “of Louisiana,” the area where the first specimen came from. The Rose-breasted shares its Genus with the western Black-headed Grosbeak. 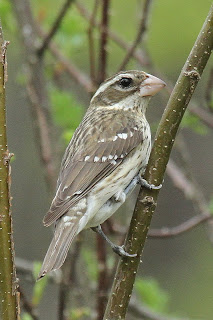 In contrast to the male, the female Rose-breasted is a plain Jane. She looks like a big sparrow, or an oversized female Purple Finch.

Usually when a male is brilliantly attired and the female is plain, the male spends most of his time singing, continuing to boast his virtues and defend his territory. Domestic duties, particularly incubation, are left to the inconspicuous female. He may perhaps join in the feeding after the eggs hatch, but not necessarily.

The male Rose-breasted Grosbeak is unusual. He provides some help in building a flimsy nest and then shares in the incubation.  When sitting on the nest, he continues to sing. Protection of a nest typically depends upon keeping its location as secret as possible from predators; singing on the nest seems counterintuitive. Edward Forbush watched a male sing while on the nest: “When a hawk flew overhead he continued to sing, but so reduced the volume of the song that it seemed to come from far away, raising his voice again when the hawk had passed on. Singing on the nest and ventriloquizing are common habits of the male.” 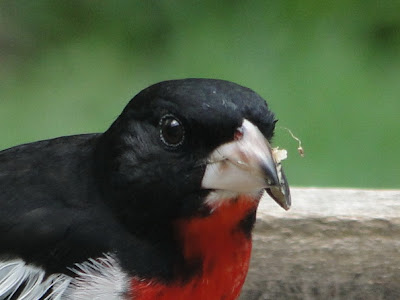 “Grosbeak” means big beak, an adaptation designed to open large seeds. Watch the grosbeaks, finches, cardinals and other large beaked birds as they feed on your sunflower seeds. Adeptly they crack open the hard shell, extract the nutritious meat and drop the casings. Chickadees, titmice, and even Blue Jays, by contrast, take the sunflower seed to a branch, hold it between the feed, and hammer it open with their bills.

However, the adept use of this “big beak” adaptation apparently has to be learned. Bent, in his life history of the Rose-breasted Grosbeak, reports this observation of the male with his adult sized offspring: “The father then started to show it how to break open sunflower seeds. Perching beside his offspring on a branch, he cracked a seed, broke the kernel into pieces, and fed it to the young bird. He then gave it a whole kernel. Next, he pretended to give the fledgling an uncracked whole seed, but held on to it and in due time cracked the seed and fed the young bird. [After a week of this], irritability on the part of the parent, which had been increasing, resulted in his jamming food into the mouth of the young bird, pecking its bill, and driving it away.” 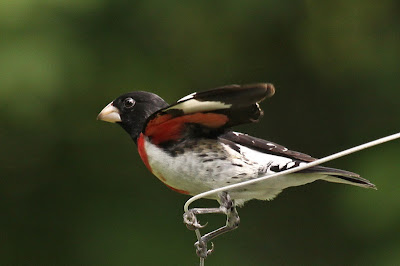 The natural habitat of the Rose-breasted Grosbeak is second-growth woodlands, the borders of swamp and streams, along wood edges, and in neglected pastures. In more recent years it has also adapted to human habitation and is not unusual in towns, villages, and suburbs where there is enough suitable trees and bushes for its nesting.

Like so many other birds, the Rose-breasted Grosbeak is not really “one of ours.” It is a tropical species. It arrives in our neighborhood in May. By mid-October, it will be back home in Central America. But during these summer months, it is a welcome resident, delighting the eye and the ear. The Rose-breasted Grosbeak is one of those birds which defines - Good Birding!

Email ThisBlogThis!Share to TwitterShare to FacebookShare to Pinterest
Posted by Chris Petrak at 6:00 AM
Labels: Rose-breasted Grosbeak

A 'lone' rose-breasted grosbeak (who I named Wilson) visited my garden (NYC) as he was "passing through." I miss him and was glad to see a "story" (your blog post) about his comrades! If you'd like to read about my experience with Wilson, my post is @ http://www.thelastleafgardener.com/2013/04/welcoming-new-visitor-rose-throated.html

Just saw a Rose-breasted Grosbeak for the first time in my backyard feeder. Beautiful bird. Been here a few days. Hope he stays