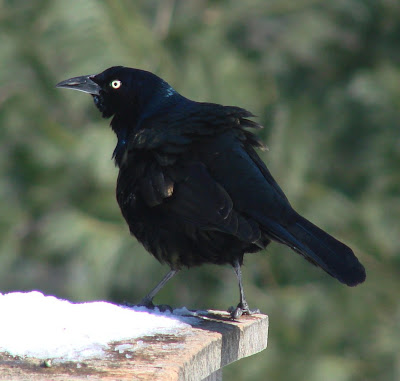 Last week I was a music critic, reviewing the musical abilities of our locally common blackbirds: Red-winged Blackbird, Brown-headed Cowbird, and Common Grackle. My review was not favorable. As songbirds, they are something of an embarrassment; some of their singing has been likened to a rusty gate hinge. However, what I might think of their singing ability is irrelevant as long as the singer is able to impress a female of his kind.

This blackbird trio evokes very different reactions from bird watchers. The Red-wing is probably the best liked, especially in the Spring when the male flashes his bright red epaulets for the benefit of the females and as a warning to other males. The cowbird, a brood parasite, is despised; even mild-mannered pacifists may be stirred into threats of violence by its presence.

And then there is the Common Grackle, the overlooked blackbird, the one that is there but seldom noticed, rarely contemplated, never appreciated. For the moment, let’s not overlook this blackbird.

The Common Grackle is the largest of these three blackbirds, about the size of a Mourning Dove, though its long tail makes it appear larger. A member of the blackbird family (Icteridae - orioles, meadowlarks, blackbirds) its scientific name is Quiscalus quiscula. Both the Genus and species name derive from the Latin meaning quail; I have found no explanation for why these very un-quail like birds were so named. Grackle comes from the Latin, graculus, a term applied to jackdaws or choughs, Old World birds closely related to crows. With its dark color, large “crow-like” beak, and tendency to behave like a crow, the Common Grackle has often been known as the Crow Blackbird. 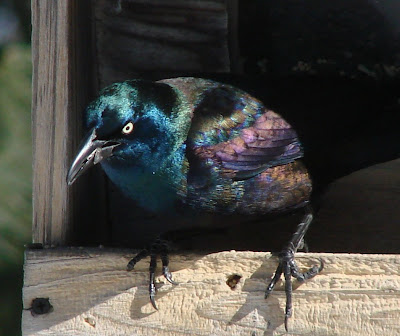 There are two forms of the Common Grackle. The “purple” grackle is found in the southeast. It is almost uniformly purple with green gloss. The more northern form is the “bronzed” grackle; its bronzy body contrasts with its blue-black head. A third form may be the Florida grackle, slightly smaller than the other two forms.

It is a disservice to describe the Bronzed Grackle, the form which breeds in our area, as having a bronzy body and blue-black head, especially this time of year. The males are in fresh breeding plumage. Even on a gray day, the body sparkles with multi-hued iridescence. When the sunlight reflects off of the wings and back, it is breath-taking. The only analogy which I can come up with is the rainbow of colors seen in an oil slick, but colors which have been deepened and sharpened. When the light is just right, the head is shiny and deep, deep blue.

The Common Grackle is very common almost everywhere east of the Rockies, with its range extending from Florida and the Gulf Coast well into the Canadian boreal forest. It is a successful species because it is an adaptable species. It has especially taken to the changes which humans have made to the landscape, readily learning to find food in farmlands, pastures, feedlots, suburban lawns, trash heaps and anywhere else that can accommodate its omnivorous tastes.

The grackle’s opportunistic adaptability has often led to its persecution. When Audubon painted his “Purple Grakle, or Common Crow Blackbird,” he showed them exercising “their nefarious propensities. Look at them: The male, as if full of delight at the sight of the havoc which he has already committed on the tender, juicy, unripe corn on which he stands, has swelled his throat, and is calling in exultation to his companions to come and assist him in demolishing it. The female has fed herself, and is about to fly off with a well-loaded bill to her hungry and expectant brood ....” The grackles are ripping apart ears of maize, or Indian corn. 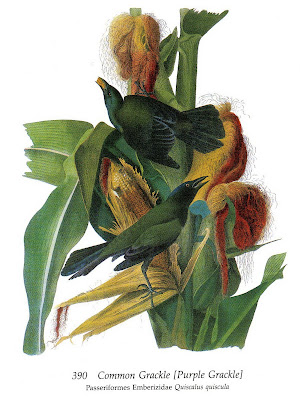 When Audubon wrote and painted in the 1840s, he was reflecting the farmers’ experience from the earliest days of the European settlement. The Crow Blackbirds were known as “Maize Thieves,” to such an extent that bounties were paid for their heads. Some towns on Cape Cod did not allow a young man to marry until he had turned in his quota of blackbird heads to the town clerk. Forbush reports that the “war against the birds was so successful that in 1749 locusts, cutworms and other grass-destroying pest so completely ruined the grass crop of the New England States that the farmers were obliged to send to England and Pennsylvania to obtain hay enough to feed their cattle through the winter ... after this occurrence the people ‘abated’ their enmity against the ‘Maize Thieves’ as they thought that they had observed the birds feeding on the pests which destroyed their crops.”

A hundred years after the New Englanders “learned their lesson,” Audubon writes about farmers in Louisiana welcoming the grackles in the Spring when they would feed on the grubs in freshly plowed fields. In the summer, the farmer’s attitude changed: “no sooner does the corn become fit for his own use, than he vows and executes vengeance on all intruders.”

The grackles in our neighborhoods are tuning up for the breeding season. When not making their wary trips to the bird feeders, I sometimes see them in the bare tree branches displaying. The male puffs his feathers out so that he looks twice as big as he really is, partly opens his wings and spreads his tail. Is he trying to scare off competitors, or somehow brag about his prowess? He knows, and others of his kind know. When the snow finally disappears from the ground, we may also see him strutting, puffed out and dragging his tail rigidly as he struts. Some writers have called the courtship of the grackles uninspiring, but what do they know - they’re not other grackles. Obviously this “uninspiring” display is a turn-on to other grackles. 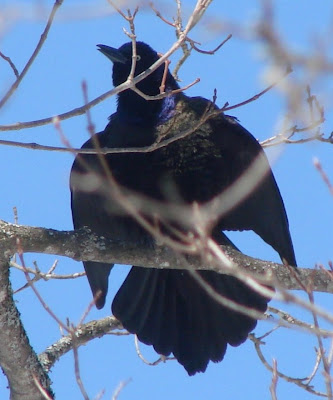 At this time of year, notice the tail when a grackle flies. It is a long tail that often looks like a v-shaped keel. You don’t see it all the time; often the tail is spread in an ordinary manner. The v-shaped keel is seen even less often after breeding season. Forbush thinks this is part of the courtship display - a way for the male to advertise the quality of his genes.

Common Grackles love corn, fruit, nuts, and grain. In Spring and when feeding their young, they take prodigious amount of grubs and insects, often ones which are injurious to crops. In pursuit of favored insects, they may even try a clumsy, flycatcher type of pursuit. They sometimes ruin early apples and pears. They may take the eggs and young of other birds. They will catch small fish in a gull or tern-like manner. Those hard, stale pieces of bread you throw out around the feeder may be soaked in water to soften them up.

This period before our favored birds return is a good time to watch the Common Grackle, our overlooked blackbird.

Email ThisBlogThis!Share to TwitterShare to FacebookShare to Pinterest
Posted by Chris Petrak at 7:22 AM
Labels: common grackle

Down here in Honduras we have the Great Tailed Grackle...the bird is actually like the common but with a bigger tail, not a good singer either...great post and Good Birding

I found a litlle grackel on a bridge in maine after his siblings had pecked him out of the nest...his name is jethro and he is just like a human trapped in a birds body...he has a great little personality...his name is jethro and he flys all around and comes when i call...he loves making jewelry with me he fetches beads but gets so mad if i don't use his selection...this is a over estimated bird...he is like having your best friend around...even my dog is starting to like him

I ment to say underestimated bird....sorry

Thank-you for this info! We get grackles every year and I have always wondered about their odd behaviours (well, not odd to other grackles I understand).

I just saw a grackle fly to the feeder, knock a small bird off to the ground, then hop down and kill it. It carried the small bird a little way off to ate it. It was so surprising! I called to my husband to come witness the event. Crazy!