More on the Most Hated Bird in America 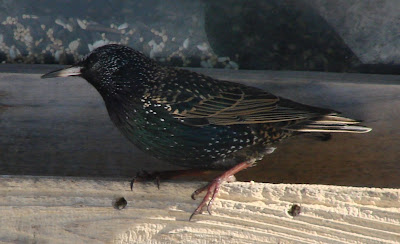 When I moved into my home in South Newfane, the first bird to greet me was a starling. Bothered by the noise as we parked the rental van in front of the barn and raised the metal door, it flew from an opening where the barn roof meets the house roof. Harsh rattles and gurgles protested our disturbance of its peace.

I soon learned that the starling had not been roosting momentarily somewhere inside the barn, but was maintaining a starling nursery in house walls. And further, that this starling family was not the only to use the walls of the house. On the opposite side of the clapboard barn and house, also where the roofs of the two old buildings meet, was the opening to another starling nursery.

Since that moving day eight years ago, every Spring and Summer I have watched as starlings go in and out of their homes in my home. It starts in March when they carry in nesting material to restore their hidden home, and continues through the summer with the raising of at least two broods. My outrage at their squatting on - or rather, in - my property has been singularly ineffective. I shout at them. I bang the outside of the building. When the cats are attracted to a place on inside and stare intently where they hear movement in the walls, I bang on the walls. The sum total effect of all this is a sore hand.

Every year I have thought about putting the ladder up and trying to seal the openings. But how do you seal an opening, when the entire gabled end of the barn where it overlaps the house roof, shows light? It would be a major construction task, and in the Spring, when I’m thinking about such a task, I have so much else to do. Cleaning the yard after winter - getting the vegetables planted - preparing the flower beds - I can barely squeeze those chores in between the necessity of monitoring bird migration in New England - after all, if I don’t do that the birds might not migrate. 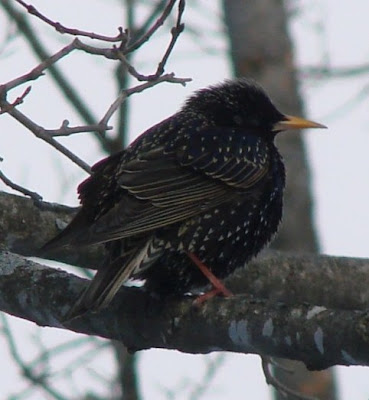 Last year I noticed that a neighbor had a simple technique to keep the starlings out of his outbuilding. A dead and desicated starling hung by the opening. That’s a thought, thought I. But truth be told, I am like most modern Americans; I hire others to kill my meat. My sensitivities are too tender. Even the mousetraps do their work when I’m not there to watch.

So I continue to curse, and the starlings continue to nest - in the walls. I hate them, but not enough to do anything about them.

In my more reflective moments, I wonder why I feel such animosity toward this bird. They are remarkably versatile and resourceful. Pete Dunne calls the European Starling, “Horation Alger in Feathers (an American Success Story) ... A real American. Established itself in the city. Moved into the suburbs. Kicked out the natives (cavity nesters like Red-headed Woodpecker, Purple Martin, and bluebirds). Now found virtually everywhere in North America.”

Starlings are primarily ground feeders, but when winter descends, they can forage like a nuthatch, hover at suet feeders like a hummingbird, or tear apart a squirrel’s nest in search of spiders and other hibernating, edible insects. They can feed like a flycatcher, or take insects on the wing like a swallow. They will follow sheep across a pasture, feeding on the insects stirred out of the grass. An observer watched a starling dart upward from its perch and grab a piece of bread from the mouth of a Blue Jay.

The starling will make no one’s list of beautiful songsters, but it is a mimic every bit as accomplished as the Northern Mockingbird, if not nearly so melodious. A writer described one old male who, “after dining plentifully, is in the habit of expressing the pleasures of a full stomach by going through his whole repertoire. With hardly a pause, but with many a jerk of tail and twitch of wings, it will imitate the songs of the bluebird, the wood-peewee, the red-winged blackbird, the meadowlark, the bobwhite, the Carolina wren, the blue jay, the whippoorwill and the flicker.” If I weren’t so prejudiced toward the starling, I would be astounded at its vocal versatility.

If I weren’t so prejudiced, I would also have to admit that its consumption of insects during its long breeding season is prodigious, and probably beneficial. The examination of hundreds of starling stomachs by researchers suggests that its consumption of injurious insects must put it into the category of a beneficial species. Cutworms, weevils, grasshoppers, crickets, beetles, caterpillars, millipedes, spiders and all other manner of creepy crawlies are fed into the gaping mouths of its young.

When Japanese beetles began their trek through the eastern United States, starlings developed an appetite for the grubs and the adult beetles. An observer in Connecticut watched lines of starlings working across his lawn, feeding on the beetles. Then one year, a cat joined the household, the starling were frightened off, and the unhindered beetles worked their way through the grassroots, killing whole sections of the lawn.

So now you may be thinking that I have become reconciled to the starlings who make my walls into their summer homes - that I am willing to tolerate their presence because they do have a good side. Well, you are wrong! Last October I saw starlings fly from the openings in the barn - front and back - which they use when they are nesting. I was outraged! Bad enough that they nest in my house. I was not going to have them roosting through the winter. I got out my extension ladder, scavenged chicken wire and cage wire, and climbed up. Tearing my hands on the sharp wire, I stuffed it into the cracks and crevices. Then I stapled the cage wire over the opening, and hammered the staples to set them securely. Away! Away! Go roost in some tree along Putney Road with your own kind. Give some Sharp-shinned Hawk a chance at a meal. Leave my seed on the ground around my feeders for my doves and my juncos.

My dander is now up. “You’re not going to nest in my walls again!” So said I, to those most hated birds in America.

Off in the distance, I thought I heard the rattle and gurgle of a starling ... it sounded like a laugh.

Quotations are from “Pete Dunne’s Essential Field Guide Companion,” 2006, and from “Bird Invasion” by Edwin Way Teale in “Treasury of North American BirdLord,” 1987.

Email ThisBlogThis!Share to TwitterShare to FacebookShare to Pinterest
Posted by Chris Petrak at 11:06 AM
Labels: European Starling