The Most Hated Bird in America

Note: Sorry for the delay in this post. I was birding in the Florida Keys and Everglades and away from the electronics - just optics and camera - and lots of birds! 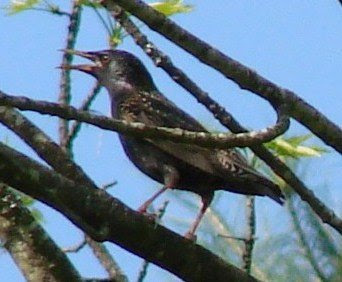 In the early 1970s, the gas company inspected the furnace in the building where I was working. There was a serious problem with the air draw in the chimney; something was blocking the flue and preventing gases from venting properly. They ordered the problem corrected, and to enforce their order, turned off the gas. The building custodian opened the flue and found the problem. He removed four large trash cans of dead starlings. Over the course of a several of winters, the birds had been drawn to the rising heat from the chimney. On their warm perch, they were overcome by the rising gases and fell down the chimney where they accumulated by the hundreds in a dried out mass of carcasses.

In 1985, I attended an Audubon conference commemorating the 200th anniversary of the birth of John James Audubon. It was held at Mill Grove on the Schulykill River outside of Philadelphia, Audubon’s first residence and home in America. The speaker at the evening banquet was Roger Tory Peterson, whose new edition of his “Eastern Bird Guide” had been published the year before. Peterson began his talk by saying that the first bird he had heard when he arrived at Mill Grove and got out of the car was a phoebe. The phoebe was a nesting resident when Audubon lived at Mill Grove, and was the first bird that Audubon studied scientifically. Audubon figured a way to band the bird in order to learn whether the same bird returned to the same spot to breed - the male did, with a new mate. Peterson then added, rather ruefully, that the second bird he heard, hard on the phoebe song, was a starling, a bird that was not even present in America when Audubon lived.

The starling is deliberately named “European” to emphasize its foreign origins; in Europe it is known simply as the Common Starling, which is the meaning of its scientific name: Sturnus vulgaris. “Vulgaris” means “common” in Latin, although we might prefer the English derivative of the Latin word - vulgar.

The starling was introduced to America in 1890. Eugene Schieffelin was a wealthy New York drug manufacturer enamored of all things Shakespearean. It became his curious aim to introduce to America all of the birds mentioned in the works of Shakespeare. “Skylarks, chaffinches, nightingales, as well as [House] Sparrows and starlings, rode across the Atlantic in cages consigned to Schieffelin. He even organized a society for the importation of foreign birds and incorporated it in Albany.”

Schieffelin’s attempts to introduce Shakespeare’s birds failed, with two exceptions, the House Sparrow and the starling. The House Sparrow had been imported by several other people in addition to Schieffelin, but the exclusive responsibility for the starling belongs to the wealthy drug manufacturer. Sixty starlings arrived in 1890, to be released in New York’s Central Park. The next year, an additional forty starlings were released. All of the millions of starlings in America descend from these one hundred birds. 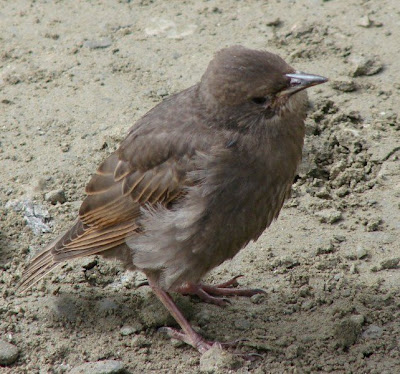 The venerable American Museum of Natural History on Central Park West has the dubious honor of having hosted the first starling nest in America. A pair found an opening under the eaves of one of the wings, and the rest, as they say, is history. Within fifty years, the starling could be found from New York to Oregon, from Mexico to the Hudson Bay.

Several factors account for the unprecedented success of the starling in colonizing North America. It is one of the first birds to nest in the Spring. It has two broods, sometimes three or even four broods, each with four to six young. In other words, a pair can produce upwards of twenty-four offspring in a single breeding season. As one writer put it, “Each year, the multiplication of these birds is something to make the ears of the fecund rabbit droop in frustration.” Another factor of the starling’s success, as with most other introduced species, is that before introduction it had already learned how to live in cities and with human neighbors. Cities and towns are underpopulated ecological zones; a bird already accustomed to cities can find the room it needs to live successfully.

Within a few years, Boston and Philadelphia were reporting a few starlings, then many starlings, then too many starlings. Attempts were made to stem the tide. “People fired shotguns into trees where the birds roosted at night and were showered with falling starlings. They doused the birds with fire hoses; they set off Roman candles; they clanged bells; they stood around beneath the trees and slapped long boards together to produce artificial thunderclaps. They set out stuffed owls, electrically charged dummy owls, aluminum owls with eyes that would shine at night, imitation owls re-enforced with explosive charges .... In Decatur, Illinois, an estimated twenty thousand starlings were killed in the course of a two-months campaign. And in Washington, D.C., Government men spent their evenings jiggling strings to which were attached rubber balloons containing dried peas. The peas in the balloons produced a hissing rattle that scared the starlings out of their wits - for a time.”

Nothing worked. Starlings are here to stay. They are nesting in flicker holes, bluebird boxes, courthouse eaves, barn lofts, bridge abutments - anywhere they can find a small cavity and a roof over their head. After raising their multiple broods, they gather in the winter in flocks of thousands and tens of thousands. A state capital roof which served as a winter roost eventually had to be cleared of eleven tons of dung. So many perch on the hands of town clocks that the works are put out of order. 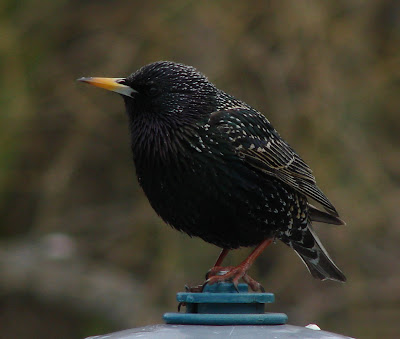 The same day that I once saw “primordial numbers” of migrating swallows on Plum Island, I saw an equal number of starlings ball up in a massive dark cloud when a hawk came near. They are successful survivors of the natural dangers that occasionally come in their colonized continent. It seems that it is easier for a Cooper’s Hawk to take a pigeon, or for a Merlin to take a sandpiper, than for either to take a starling. Either predator can reduce a resident population of pigeons or sandpipers during a winter, but if they are feeding on starlings, they are making little impact on the numbers.

Most birders keep a list of the birds they see during a bird outing. Many don’t bother listing the starling. I do, because I am interested in those rare occasions when I can go almost an entire day without seeing a starling, and those even rarer days when I don’t see one at all. Not that I miss it! Bird lover or not, the starling is not a loved bird. In fact, it is without a doubt the most hated bird in America.

Quotations are from “Bird Invasion” by Edwin Way Teale in “Treasury of North American Birdlore,”

Email ThisBlogThis!Share to TwitterShare to FacebookShare to Pinterest
Posted by Chris Petrak at 6:54 AM
Labels: European Starling

I didn't know much about starlings until this past spring and summer when I raised one from the age of 5 or 6 days old. He's a wonderful pet, a great joy in my life. Perhaps a good way to deal with the Starling problem is to encourage people to make pets of them. That would take them out of the wild population. They are as smart as parrots (at least mine seems to do most things parrots would do, trainable, plays with toys, understands words, etc.) and some say they talk even better. Mine is still to young to talk, but I enjoy his singing in the meantime. You can get more information on pet starlings here: http://www.starlingtalk.com/petstarlings.htm

Here is an update on my pet starling, Attila. He now has several phrases in his vocabulary, he says "You're a good birdie", "I Love You", "You're so sweet", "Come here Attila", "Hi Attila", "It's ok Attila". All things I say to him a lot of course. He whistles three tunes that I've taught him. Here are some photos of him - Attila's Album