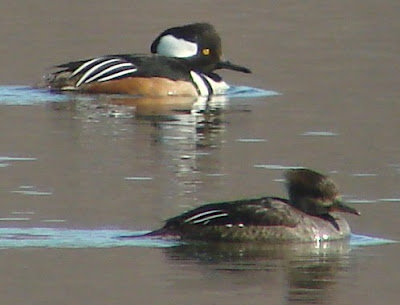 Early April is the prime time for viewing waterfowl. The ducks are on their way north to their breeding grounds. They pause along our rivers to rest, roost, and feed. Their numbers are often in the hundreds, sometimes the thousands. It is the time of year when I always have my scope with me.

However, two of the most beautiful ducks in the world, ducks found only in North America, are not just passing through. They breed in small lakes and ponds, and sometimes along streams and rivers throughout our area - Wood Duck and Hooded Merganser.

The drake Wood Duck is bright and multi-colored; he looks like the creation of a Pop artist with a pallet of barely mixed primary colors. The Wood Duck is a common three season bird in our area, found where the waters are quiet in wooded swamps, shady pools, and lazy rivers. They go south for the winter.

Not so the Hooded Merganser. As long as there is open water, a few of these ducks can be found in our area throughout the year. They are considered uncommon throughout their range, and until I moved to Vermont a dozen years ago, I rarely saw them. Now I live in the heart of their range and find nothing unusual about seeing them during any month of the year along the Connecticut River, in and around the Retreat Meadows or Herrick’s Cove, or in some remote beaver pond up in the hills. On the last day of March, I watched a dozen in the West River - in pairs or small groups of four or five. The drakes were in full, fresh breeding plumage, displaying for the hens with the whiplash neck stretch typical of waterfowl, pursuing each other, and the hens. Early this week I watched a similar show at Herrick’s Cove. The drake Hooded Merganser is not as brightly colored as the Wood Duck, but the bold black and white pattern of head and neck, the crisp white streaks on the wings, and the bright orange-brown on the sides combine for a stunning effect. And then there is the hood! Here’s Pete Dunne’s description in his Essential Companion: “The boldly patterned drake, adorned with a crest that opens and closes like a Chinese fan, is hard to overlook. With the hood closed, the head is anvil-shaped and adorned with a peanut-shaped white patch behind the eye. With the hood open, the head bulges into an oval fan with a pure white center and a black border that sets off a golden eye and a thin black bill.” 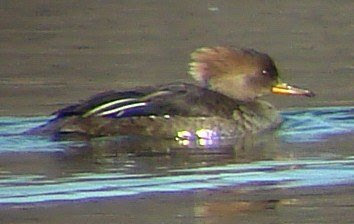 The female is like most waterfowl females - plain and drab. Except - she has a light brown crest which is almost always partly or fully raised; even from a distance the crest looks like a halo glowing about her head, a luminous aura. The beginner waterfowl watcher can confirm her identity (not always easy with the waterfowl hens) by scanning the water for a drake. One is certain to be in the area, and his distinctive plumage is unmistakable at almost any distance.

The Hooded Merganser is one of three mergansers regularly found in North America (along with Common and Red-breasted) and the only one endemic to the continent. Classification of mergansers is subject to much discussion; some taxonomists class them with the sea ducks; others give them their own sub-family. At one time they were regarded as very primitive ducks, their serrated beaks being considered an evolutionary hold-over from toothed dinosaurs. More recent studies now dispute this.

The beak is a distinguishing characteristic of the mergansers. Sportsmen call them “sawbills.” Mergansers are diving ducks that regularly eat fish; the serrated edges on the beak help them grasp the slippery small fish that make up most of their diet. Hooded Mergansers, however, have a varied diet. Nesting in small ponds that have no fish, the Hooded will take small frogs, tadpoles, insects, seeds, and even the roots or bulbs of water plants.

Merganser comes from two Latin words meaning “diving goose.” (The Common Merganser is about the size of a Brandt, a small goose.) The striking white crest gives the Hooded Merganser the rest of its name. The Hooded’s folk names are many, often including “sheldrake,” which comes from the English colloquial meaning “dappled, variegated.” It is variously known as Hooded, Wood, Pond, and Pickaxe Sheldrake. It is also known as Spike-bill, Hairy-crown, Hairy-head, Saw-bill Diver, and Water Pheasant.

The Hooded Merganser often winters along the coast in brackish wetlands and tidal creeks; it is seldom found in salt water or large open bodies of water, although I have seen it in late winter in Lake Champlain. In general, it prefers fresh water, and gently flowing rivers. During late Fall, Winter and early Spring, in the turbulent waters below the Vernon Dam, you are likely to find goldeneyes, perhaps Common Mergansers, and an occasional Long-tailed Duck. The Hooded Mergansers are more likely to be found along the quiet edges around the island or in calmer waters further down river. As the ice goes out, they frequent the edges around the Retreat Meadows or the calm waters of the West River. 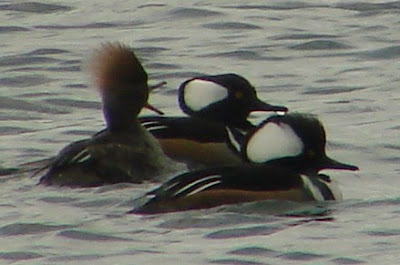 Many writers suggest that when ducks begin moving north to their breeding ground, they have paired for the breeding season. As I watch the Hooded Mergansers at this time of year, it looks to me as though the pair formation is still an open issue. Drakes are displaying and squabbling with one another and chasing the hens. And sometimes it looks as though the hen is trying to get the attention of a drake - any drake. I watched four drakes in the West River swimming together in a tight group. A hen trailed close behind, sometimes appearing to be quacking for attention.

Hooded Mergansers share breeding habitat with Wood Ducks; both are cavity nesters and at times may compete for the same cavity in a forest wetland, swamp, or beaver pond. Bent’s life history reports not only such competition for nest sites, but occasionally a sharing of a nest site, with female Wood and female Hooded laying eggs in the same nest. In the 1890's, an observer wrote: “I believe it is well known that the wood duck often drives the merganser from her nest, and in one nest I found 30 eggs of wood duck and 5 eggs of merganser. The hollow in the tree in which the nest was placed was not very large and the eggs were several layers deep.”

Like Wood Ducks, Hooded Merganser young leave the nest soon after hatching. They jump, scramble, fall, or flutter to the ground or water below.

On a sunny day a few summers ago, I was hiking somewhere above the Harriman reservoir. I found a warm rock near a beaver pond and used it for a mid-morning picnic spot. During my quiet sit, I saw something small and drab moving among the marsh grasses. It was followed by feather balls scurrying over the surface. Then the drab form dove. Seconds later, one after another feather ball also dove. In turn each popped back to the surface. I stood slowly to get a better look, but my imperceptible movement did not go unnoticed. Mother Hooded and her young disappeared into the grasses.

We are fortunate to have these uncommon, beautiful, and handsome ducks so accessible. Hooded Mergansers on any quiet river or pond are one definition of good birding.

Email ThisBlogThis!Share to TwitterShare to FacebookShare to Pinterest
Posted by Chris Petrak at 6:42 AM
Labels: Hooded Merganser

I have questions about my own nesting box that I put up last Fall, with DOUBLE success. I do indeed, have a wood duck hen AND a hooded merganser hen in the same box. I can't really call it "sharing". The Hooded Merganser leaves the nest every morning around 5:00. She is gone for at least 1/2 hour, sometimes more. When she returns, she swims in front of the box, sits on a log watching the box, flies AT the box, sits some more, and eventually flies off. I don't know when she returns, but I do see her exit the nest in the mornings.

The wood duck, I rarely see. I unintentionally scared her from the nest once, so I know that she is there, too. This morning, while the merganser was away, I saw the wood duck return, fly at the nest a couple of times, then fly in. Afterward, the hoodie started her ritual of watching, waiting, attacking the box, leaving.

Has this behavior ever been explained? How do they manage to do this and how will they keep their chicks separate, once they hatch?

I live in southern Minnesota, close to the Mississippi, with a pond behind my house. Every year, we have at least 12 pairs of Hoodies!