A Brief Guide to Bird Guides

Last week I reviewed the new “Peterson Guide to the Birds of North America.” Roger Tory Peterson published his first field guide in 1934, and in so doing he taught us how to bird. His carefully detailed paintings were augmented by the “Peterson system” - arrows which highlighted field marks, those key features which distinguish one bird from similar birds. Peterson was so successful in communicating a love for birds, that the passion for bird watching is now shared by millions of people.

Today, birdwatchers have dozens of resources available to help identify birds, with more appearing every year. There is no such thing as the perfect field guide. Every field guide has strengths and weaknesses. I have seen exceptional birders puzzle through three or more guides in the effort to confirm an identity. Even backyard birders will find their feeder watching enhanced and improved by having at least two updated guides close at hand.

In addition to one of the Peterson guides, there are three all purpose, comprehensive guides to the birds of North America which most reviewers regard as essential. 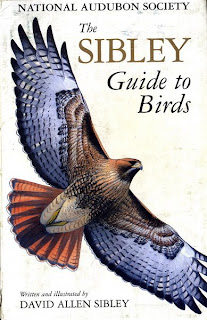 David Sibley is sometimes considered the successor to Roger Tory Peterson. Sibley, like Peterson, is a world class birder and a fine artist. Peterson used bird specimens and field experience to create his paintings in his studio. Sibley sits in the field, peering patiently through a spotting scope, drawing and painting from live models. The stunning result of Sibley’s work is The Sibley Guide to Birds published by Knopf in 2000. There are not just one, or two, or three illustrations of a particular species; there are illustrations of all the plumage differences in age, sex, and races. Opening the guide at random, I found for the Indigo Bunting illustrations for the female breeding and non-breeding, the male breeding and non-breeding, and two each for the female and male in flight. When a Harris’s Sparrow which showed up in Vermont for only the second time (in Putney) in the winter of 2001, Sibley provided seven illustrations, including one which allowed the bird to be identified as a first winter bird. For the Lesser Black-backed Gull, which is increasing on the north Atlantic coast and which occasionally gets reported on our Connecticut River (but not yet confirmed), there are fourteen illustrations or drawings. Plus, there are range maps and textual descriptions. On a birding trip along the Massachusetts coast, I initially had difficulty identifying a Merlin which was harassing a Rough-legged Hawk and a Short-eared Owl. I know the Merlin as a “dark” falcon, but this one was light. With Sibley’s help I could identify the Merlin as a prairie population bird, probably female.

When I first bought the Sibley guide, I considered it more of an arm-chair guide, than a field guide. It is 6 inches by 9.5 inches by 1.25 inches and weighs in at 2.6 pounds - definitely not a pocket guide! But it is so comprehensive and so useful, that I found ways to keep it close at hand when birding. Fortunately, in 2003 Sibley issued an Eastern guide and a Western guide, both of which sacrifice very little in comprehensiveness, but are portable - almost fitting into the back pocket of jeans. Unlike the “big Sibley,” these “little Sibleys” have a quick index in the back to get you quickly to “falcon,” “sparrow,” or “jay.”

Birds of North America by Kenn Kaufman, (Kaufman Focus Guides, 2000) has become my pocket guide of choice. Beginners like field guides with photographs; experienced birders know better and prefer paintings which better convey field marks and plumage. The Kaufman guide is the exception. Using digital technology, Kaufman spent over 3000 hours working on over 2,000 photographs, correcting them for color, size, and lighting; removing shadows, sharpening contrast, and emphasizing field marks in order to get the photographs to look like the birds we see in the field The result is remarkably successful. This is also the first guide since Peterson’s to point to particular distinguishing field marks. The maps are small, but readable. There is a “quick” table of contents inside the front cover, and a useful “quick” index inside the back cover. The text does not follow a set pattern, but varies in its written description to include information that will aide in identification. For example, Kaufmann reminds me of what I have seen often: that the sanderling “runs up and down the beach, chasing the waves,” that the least sandpiper “is the one seen most often on muddy edges of rivers, ponds, marshes,” while the semipalmated sandpiper “swarms on mudflats.” I alternate between a “little Sibley” and “Kaufmann” when I am birding.

The third all purpose guide is the Field Guide to the Birds of North America (National Geographic, Fifth Edition, 2006). The bird illustrations on the 967 species are excellent - and for waterfowl and shorebirds, they are unsurpassed. The paintings are precision works of art, as opposed to Sibley’s paintings which are more impressionistic. I find this detail sometimes gets in the way of identification, but that may just be my quirkiness. I know some birders who won’t use any other guide. I am puzzled, however, at the lack of winter plumages, especially for the “confusing fall warblers”. The maps are small, but useful. The text uses “Range” to describe habitat and some feeding habits, useful information which is sometimes lacking in field guides. I would use this guide as my field guide more often, except it is too big to fit in my jeans pocket. However, if you customarily go birding with a fanny pack, or wear clothing with baggy pockets, then this is probably a better choice than Kaufman’s guide. One final caveat: from the limited which use I have given my copy, it does not look as though it would sustain a lot of field use before becoming fatally worn.

If you are hoping Santa will bring you a new bird guide for Christmas, don’t leave things to chance. Tell the jolly old elf you would like one of these. Or better yet - two of them. Good birding!