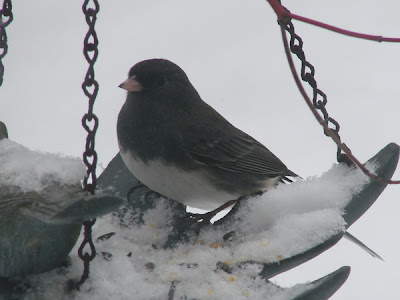 Our modern language and culture has the ability to create new vocabularies in the blink of a nanosecond. Some new technology or strange event and we have a long list of new words cluttering our airwaves. Or some new twist of culture comes along, and an old word takes on new meaning. The ability of the English language to adapt and change makes it one of the most dynamic languages in the world. There is no “correct” English language or grammar, because it is in constant flux. The fussy pedants who complain about “bad” English are trying to fossilize something that hasn’t died, but is doing what living things do - evolve.

Nevertheless, there are some words that have changed meaning that tempt me to dinosaur like protest. My rant for today is the contemporary meaning of “snowbird.” In modern parlance, a snowbird is a person who goes south for the winter. As the temperature plunges and the snows begin to fly, these less than hardy persons fly south. In many southern locales, such as Florida, snowbirds are welcomed. Though only seasonal, they bring the potential for lots of money. They have provided huge profits to people who convert wetlands to suburban lawns and miles of strip malls. Churches in these regions love snowbirds. The snowbirds may not attend church when they are in their summer lands, but on the wintering grounds they intently cram for their finals.

In the north, snowbirds are viewed differently - either with envy by those they leave behind - or with a bit of sneer by those who consider a New England winter to be the best season of the year when the true mettle of a person is revealed.

This is a modern meaning of snowbird, one which shows our cultural detachment from the natural world, but which also retains a continuity in meaning. We see the etymological evolution of this word when John James Audubon wrote about the “Common Snow-bird.”

“This is one of our winter visitants from the north, which, along with many others, makes its appearance in Louisiana about the beginning of November, to remain a few months, and again, when spring returns, fly off, to seek in higher latitudes a place in which to nestle and rear its young. So gentle and tame does it become on the least approach of hard weather, that it forms, as it were, a companion to every child. Indeed, there is not an individual in the Union who does not know the little snow-bird, which, in America, is cherished as the Robin is in Europe.”

Today we know Audubon’s Common Snow-bird as the Dark-eyed Junco (aka slate-colored junco.) Our junco is a winter bird, often one of the most common around our feeders and in our fields. “A bleak gray day in early winter - bare trees standing stark and black against a background of white snow - a cold wind sweeping across the drifted fields - and in a sheltered, brush-filled corner, a flock of lively little gray and white birds fluttering and twittering together. The Slate-colored Junco has been aptly described as ‘leaden skies above, snow below’ and it is with days such as these that many people in the North associate this friendly little visitor.”

This description by the old Massachusetts ornithologist, Edward Forbush, still captures the junco in our neighborhood. The junco inspires committed birdwatchers to fight a rearguard action against the movement of our language; they cling to the old meaning and refer to the junco as “snowbird.” 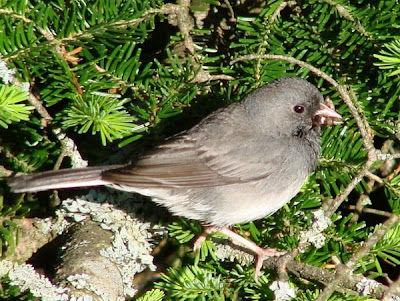 The Dark-eyed Junco nests at higher latitudes and higher elevations. It is a common breeder in the Canadian boreal forests, its range extending northward to the tree line. In New England, it can be found on mountain and hill tops. I have found breeding juncos in the Spruce forest on Mt. Snow, and in mixed hardwood, pine, and spruce forests on Newfane Hill and in many other locations at or above approximately 1500 feet. In the river valleys, they are rarely seen, but as Fall progresses toward Winter they become increasingly common. Juncos begin appearing around my feeders in South Newfane (about 700 feet) in late September and early October and will continue until the snow disappears in April. 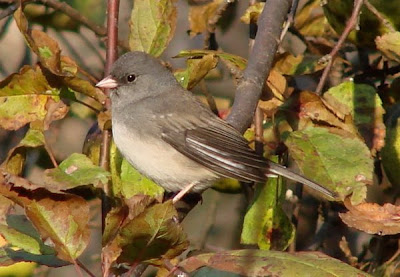 I wish I knew whether my wintering juncos were short distance migrants, moving from the top of Newfane Hill or Dover Mountain down to my valley, or whether they have come a long distance from breeding grounds in Canada. I don’t know. As we know from the words of Audubon, they often move far south; they were common winter birds when he wrote his account New Orleans.

A few things we do know. There is some difference between the male Dark-eyed Junco and the female. The female is paler gray and her plumage is everywhere more veiled with brown. A dark gray, sometimes almost black, junco is almost certainly a male. Males tend to winter further north than females. It is thought that this puts them closer to their breeding grounds, and it is certain that the males establish their territories days in advance of the female’s arrival. 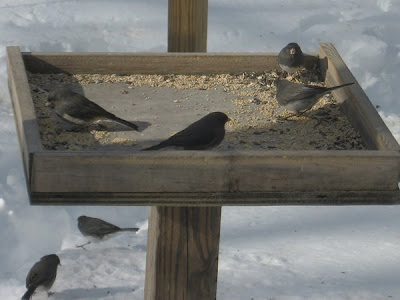 We are most likely to know juncos as wintering birds. Bent’s Life History cites several sources which document the formation of foraging flocks. Flocks form as the birds arrive in an area, and each flock has an exclusive foraging territory. In other words, the same flock of juncos visit my feeders day after day: “The formation of firm associations and the occupation of definite foraging areas take place at once among the earliest arrivals .... late comers are integrated into existing groups. The flock thus formed does not fly about as a unit, however. There appears to be no limit to the size of a foraging group. It may include the whole flock or it may consist of a single bird. The entire flocking procedure is marked by the continual forming and dissolving of groups of unpredictable size consisting of individuals that consort together and are daily visitors at the feeding sites.” (Bent)

In the winter, a flock of small gray and white juncos forages beneath my feeders. They hop and scratch in sparrow fashion, clearing snow and garden debris in search of food. Something alarms them, and they fly, flashing their bright white tail feathers. It reminds me of some lines from Robert Frost’s “The Wood-Pile”:

A small bird flew before me. He was careful
To put a tree between us when he lighted,
And say no word to tell me who he was
Who was so foolish as to think what he thought.
He thought that I was after him for a feather -
The white one in his tail .... 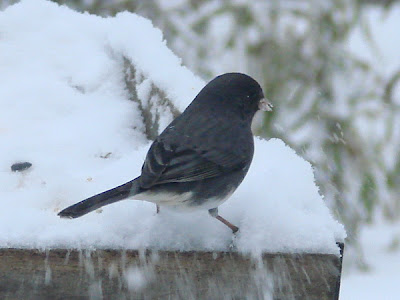 In spite of our modern language, snowbirds are not the people who flee our winter. Snowbirds are the hardy little juncos that seem to embrace winter. They may look like the leaden skies above and white snow, but there is nothing leaden about their hardiness and energy as they fly with flashing white tailfeathers.