The crab apple had a prolific year and is normally a preferred winter fruit by the birds. But it has already been picked clean, so the birds are resorting to the left over apples - and there are plenty of them. Previously, waxwings fed on the apples. Yesterday robins came as close to being feeder birds as I have seen, feeding on the apples, both on the branches and on the ground. 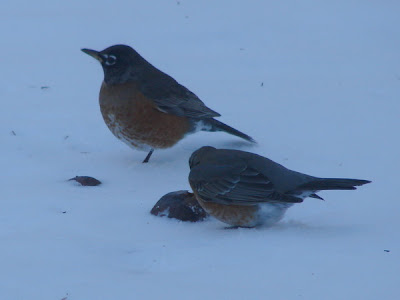 Not great photos - overcast winter days always are days of low light - plus I'm shooting through a window which needs cleaning. Nevertheless, we can clearly see this robin eating a hole into the apple. A lot of winter fruit ferments; I have seen waxwings get falling-down drunk on fermented crabapples and winterberries. I wonder about the robins; they did not seem to be staggering when they flew. The apple tree came down in an ice storm thirteen years ago and then regenerated from its root stock - this year was the first year it has produced apples. The apples are bitter; sugar content is minimal. Maybe the fermenting is retarded as a result. Anyway, if the apples have fermented, then these robins appear capable of holding their liquor. 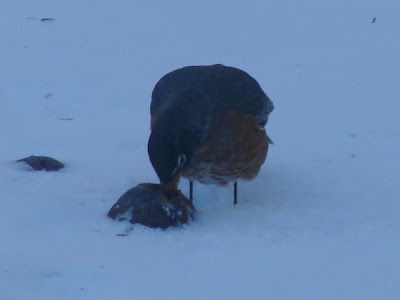 There are lots of reports of siskin flocks, and I have my share. They predominate in the finch flock, outnumbering the goldfinches anywhere from 3to 1 (as in this photo, roughly speaking), to 10 to 1. 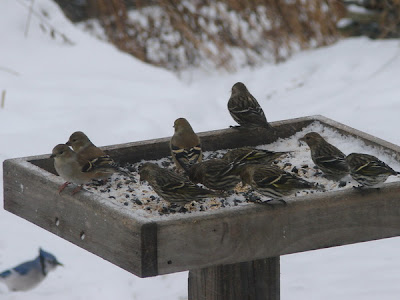 Can't resist including the cardinal and jay. We've had as many as three female and three male cardinals. Yesterday during the morning flurries, three males were behaving like someone was intruding on someone else's territory - a lot of chasing. 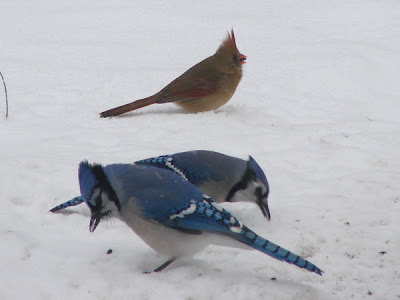 Love the jays! and I always pay attention when they make a big racket. The racket often means a hawk is nearby. 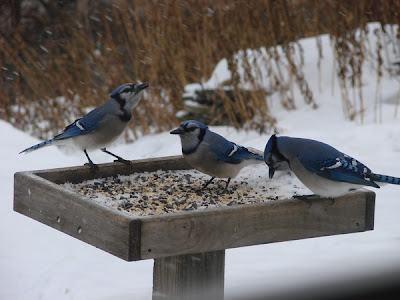