Audubon's Encounter with a Mallard & Her Family

John James Audubon's The Birds of America holds a well-deserved place in the literature and early nature writing of America. As I wrote about the Mallard, I found many parts of his account useful and informative. The following passage also captured me, but it did not fit into the focus of the columns. So I reproduce it here. 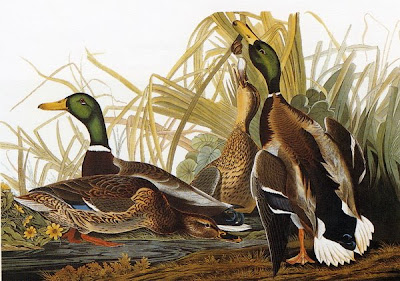 "Once I found a female leading her young through the woods, and no doubt conducting them towards the Ohio. When I first saw her, she had already observed me, and had squatted flat among the grass, with her brood around her. As I moved onwards, she ruffled her feathers, and hissed at me in the manner of a Goose, while the little ones scampered off in all directions. I had an excellent dog, well instructed to catch young birds without injuring them, and I ordered him to seek for them. On this the mother took to wing, and flew through the woods as if about to fall down at every yard or so. She passed and repassed over the dog, as if watching the success of his search; and as one after another the ducklings were brought to me, and struggled in my bird-bag, the distressed parent came to the ground near me, rolled and tumbled about, and so affected me by her despairs that I ordered my dog to lie down, while, with a pleasure that can be felt only by those who are parents themselves, I restored to her the innocent brood, and walked off. As I turned round to observe her, I really thought I could perceive gratitude expressed in her eye; and a happier moment I never felt while rambling in search of knowledge through the woods."

Email ThisBlogThis!Share to TwitterShare to FacebookShare to Pinterest
Posted by Chris Petrak at 5:30 AM
Labels: John James Audubon, Mallard

Thanks for posting that passage, I'm glad to have read it.