Avian signs of Spring are starting to show. First Red-wings were at the feeders on 2/26, again on 3/5, and yesterday were all along the Connecticut River. Also big flocks of robins and occasionally some grackles - although I had my first feeder grackle on 2/5. I'm getting antsy to get out, so yesterday I made my second trip to Turners Falls, MA, to check the later afternoon gull roost. For a roost of 200-300 gulls, there is a considerable variety mixed among the common Ring-bills, Herring, and Greater Black-backed. The Slaty-backed Gull did not appear a week ago, and was absent yesterday (or at least not seen yesterday while I was there.)

But present was this hybrid Glaucous x Greater Black-backed Gull which was identified by a couple of the Bay State's (premier, top, expert) peripatetic birders. 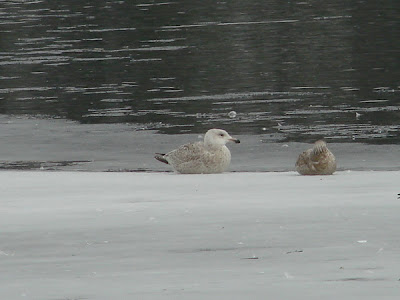 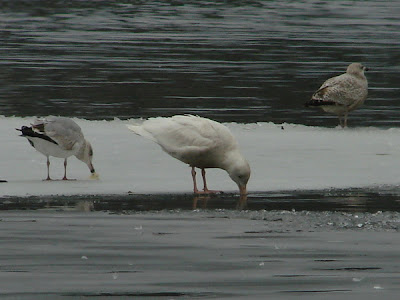 Among the Ring-bills, a single pale adult Iceland Gull - apparent Iceland, as opposed to a Kumlien's Gull, which may be an Iceland subspecies, or an Iceland x Thayer's hybrid, or a species in its own right - all of which even the best birders have a contentious time distinguishing. A week ago I listened to the ID dispute; yesterday I just took Hector's word for it. 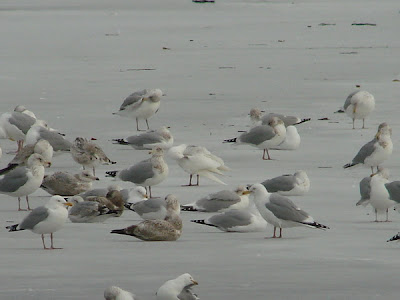 About two dozen drake Ring-necked Ducks put on a diving display in the open waters, while harassing the lone hen whenever they came to the surface. 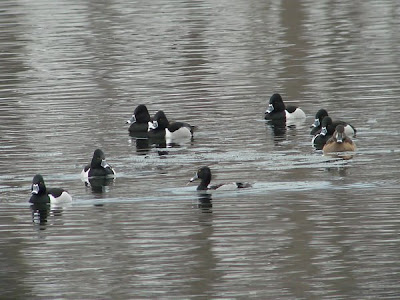 And I just liked this lone Mallard who climbed onto the ice - whoa! that's cold on the tootsies! 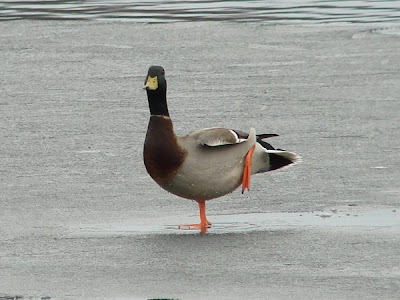