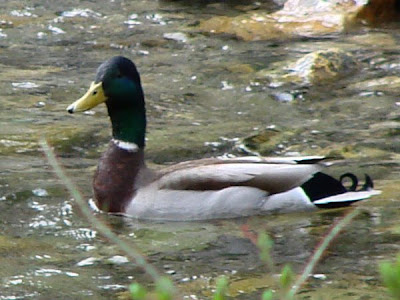 The Mallard is so common and so familiar that we hardly pay it any mind. Bird watchers scan right over the Mallard as they look for a “good” duck somewhere in the mixed flock of waterfowl. They see a distant group of ducks feeding in a protected cove along the coast in the winter. They lift their binoculars, see that the ducks are all Mallards, and then mutter something like, “Phooey, just Mallards.”

I am often the same way. But I also try to get birding companions to pause on the Mallard from time to time. The Mallard drake is a beautiful and handsome bird, with a stature and plumage worthy of appreciation.

The Mallard is the largest dabbling duck, twenty-three inches in length and weighing about two and a half pounds. It can be found in any wet habitat - salt marshes, woodland beaver ponds, city parks.

The famous children’s story, Make Way for Ducklings, tells of Mallards which nest on an island in the Charles River and then moved their entire brood over to Boston’s Public Gardens. The story captures one of the reasons the Mallard is so common and widespread - its adaptability. Wetlands in many places have disappeared or been reduced causing many wetland species, such as ducks, to decline in number. The Mallard has thrived because it has been able to adjust to human presence; when landscape architecture creates ponds in an urban or suburban location, Mallards can move in. Agriculture drained marshes and claimed land for planting; then watering holes were created for livestock, and Mallards adapted.

The Mallard is found throughout the northern hemisphere and is the progenitor of nearly all domestic ducks. (The Muscovy is the only other duck that has been domesticated.) Early naturalists knew the Mallard as the Wild Duck, a recognition that it was the wild counterpart of the farmyard duck. “Mallard” was used as the term for the male of the species. It was not until the early twentieth century that “mallard” was accepted as the name for the species, with the male being called the Mallard Drake.

The Oxford Book of British Bird Names traces “mallard” to the fourteenth century and in turn attributes its presence in the English language to the Normans. But it says nothing more about its meaning. American Bird Names by Ernest Choate is somewhat bolder; Choate goes from the Normans back to the Romans and their Latin, and derives the name from the term for “male,” plus an intensifying adjective, “-ard,” meaning “bold, hardy.” Unfortunately, “mallard” as a “bold male” is not the real meaning. Choate says that mallard “generally has a pejorative sense as in drunkard, dullard, and sluggard. The suffix seems to fit well the mallard male who exemplifies in this relations with the female a singular concentration on the physical union alone. The female, after she is snatched bald-headed, gets the eggs to hatch, the ducklings to raise, and her drake’s name.” 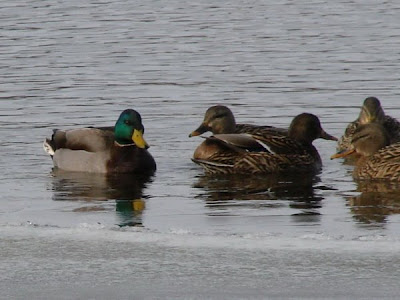 Alas, that’s true. As handsome as the Mallard drake is, his good looks serve only one purpose; to convince a female that his genes will be good for her offspring, if she can manage to successfully incubate, brood, care for, and raise them. In his wonderful nineteenth century prose, John James Audubon described the Mallard’s courtship thus: “The males, like other gay deceivers, offer their regards to the first fair one that attracts their notice, promise unremitting fidelity and affection, and repeat their offers to the next they meet ... He plays around this one, then around another, until the passion of jealousy is aroused in the breasts of the admired and flattered .... Many tricks are played by Ducks, good reader, but ere long the females retire in search of a safe place in which they may deposit their eggs ....”

The children’s story about the Boston ducklings implies that Mr. & Mrs. Mallard are a devoted couple, but if you remember the story, it is Mrs. Mallard who in fact does all the work, including leading her ducklings through the dangerous streets of Boston to the Public Gardens. She gets help from the Irish cops, but not from Mr. Mallard who is off somewhere doing something.

However, we should not be too harsh on the Mallard drake. His plumage evolved for sexual attraction. The plumage on the Mallard hen evolved for protection and camouflage; her drab brown appearance helps her “disappear” among the reeds, grasses, and mud where she makes her nest.

In addition, her young do not require a great deal of care. The hatchlings are precocial, relatively well-developed when they emerge from the egg. They have a thick coat of natal down. Shortly after hatching (perhaps within twenty-four hours) they leave the nest and are able to feed themselves. Her job is to help them find food. If there is not enough food where they hatched, she may lead them overland to other waters, as did the Boston Mrs. Mallard.

Her job is also to help them avoid danger - hence, the familiar line of ducklings which follow her about, sometimes disappearing into the pond reeds when something disturbs her sense of safety. Raising young is far less demanding for Mrs. Mallard than for almost any Mr. & Mrs. Songbird. 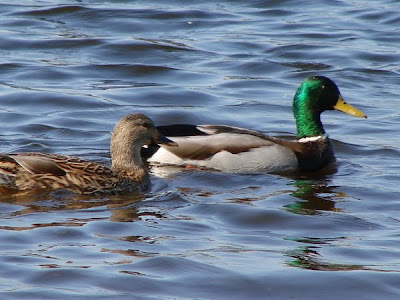 A colorful male and a drab female (called sexual dimorphism) is common among the ducks, and serves the same purpose among other species as with the Mallard; so we ought not be too harsh in our opinions of the Mallard drake.

As adaptable to civilization as the Mallard is, it remains the “Wild Duck” - cautious and wary. Unlike Audubon, we do not carry a gun as we wander along water’s edge or approach a pond with binoculars or walking stick. But we have all observed what this early naturalist observed: “Look at the Mallard as he floats on the lake; see his elevated head glittering with emerald-green, his amber eyes glancing in the light! Even at this distance, he has marked you, and suspects that you bear no good will toward him .... The wary bird draws feet under his body, springs upon them, opens his wings, and with loud quacks bids you farewell.”

Not many bird watchers include the Mallard in their definition of good birding. Mallards are just a part of the background scenery. But that background scenery often provides the context for the play and certainly enriches the play. From time to time we ought to take the time to appreciate the familiar.

Email ThisBlogThis!Share to TwitterShare to FacebookShare to Pinterest
Posted by Chris Petrak at 6:00 AM
Labels: Mallard