The Newest Vulture in the Neighborhood 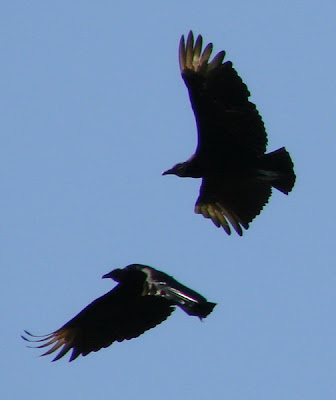 Mid-morning I was driving north on Putney Road. Two black birds flapped over the road ahead of me. The regular flapping at first said crows, but they were too big to be crows. The big black size said Turkey Vultures, but Turkey Vultures flap their wings rather slowly as they try to get far enough aloft to catch the thermals. These two birds were flapping hard, but awkwardly with quick choppy wingbeats. It looked as though they were struggling to gain altitude, indeed struggling just to fly. The broad wings tried to lift the stumpy bodies with a head, but barely any suggestion of a tail. Finally my mental synapses fired: Black Vulture.

The drivers seat of a vehicle on Putney Road is a precarious place for birdwatching. Most people driving that road are in a hurry to get somewhere. What with radios, cell phones, mental shopping lists, and a determination to get wherever as soon as possible, there is little patience for the distracted bird watcher in the car ahead. But Putney Road is lined with a couple of miles of parking lots and lots of places to access those parking lots. I made a right hand u-turn into one, grabbed by binoculars from the passenger’s seat and got out to check the awkward flaps of the big black birds. They were, indeed, Black Vultures.

Black Vultures have been reported sporadically in the Spring and Fall for the last few years. Most of the Vermont sightings have come from the lower Connecticut River Valley, principally around Brattleboro. In 2007 the first Black Vulture was reported by the Putney Mountain Hawk Watch. 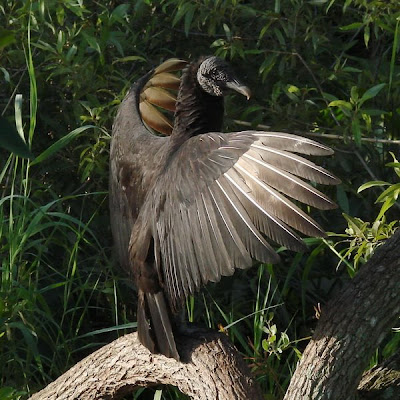 The Black Vulture is a bird of the southeast. In recent decades, it has been slowly extending its range northward along the coastal states. By the mid-1990s, I saw it regularly around my home in eastern Pennsylvania. Though hardly common, it was not unexpected. Turkey Vultures roosted in pines across from my home during the Spring and Fall; the roost often included a Black Vulture.

Black Vultures have been moving up the Connecticut River Valley. Their regular presence in Vermont has been predicted as the erratic sightings have become more frequent from year to year.
This Spring, Black Vulture reports have been coming from many places in the state, and not just one or two birds, but as many as six. The predictions are being confirmed.

More recently, the taxonomists have concluded that the New World Vultures are unrelated to storks and should have their own family classification. The official story is that DNA studies compel separating the vultures from the storks, as well as from the hawks. But I suspect that the official story and the real story are different. I think the real story is that the storks were offended at being related to anything as ugly as the Black Vulture and the Turkey Vulture and lobbied for the reclassification. 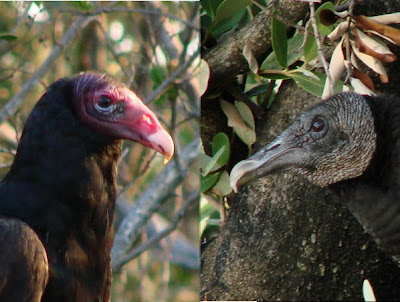 The Turkey Vulture has a small, featherless red head. Only the most aesthetically impaired could consider this bird to be cute, attractive, or beautiful. It is not. However, the Turkey Vulture does have redeeming features. It is a master of the air and wind. It may flap its long, broad wings when it first takes flight and until it finds the rising air currents, but once it finds those currents, it soars effortlessly, tipping and bobbing and circling. The Turkey Vulture has an acute sense of smell; it can pick a molecule or two out of the atmosphere and follow that scent for dozens of miles to the carrion on which it feeds.

The Black Vulture has a bigger, dark gray, wrinkled head. Its stubby tale looks like it was lopped off with garden shears. Where the Turkey Vulture has grayish white on the back underside of its wing, on the Black Vulture the grayish white is on the end of the wings. Its splayed primaries are spikey, as though the spikey top-knot of some gothic teen were relocated to the extremities. 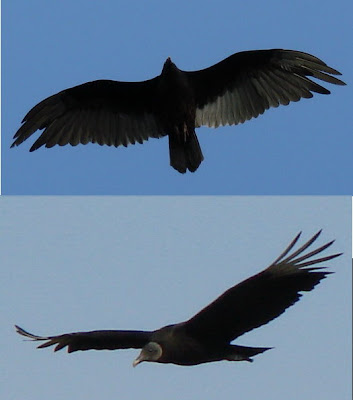 The Black Vulture also has the unendearing practice of not always waiting until its carrion is, in fact, carrion. Just because something hasn’t quite died is no reason, in the Black Vulture’s mind, why it should not begin feeding.

When Black Vultures joined Turkey Vultures in my old Pennsylvania neighborhood, a neighbor was very concerned. She had two old Labrador retrievers who spent most of the day asleep in the middle of the yard, their only movement coming from barely perceptible breathing. Even the call for dinner brought a desultory response, a slow lifting of head, raising of ancient body, and shuffle toward the door. My neighbor worried that the Black Vultures would, in her mind (not the vultures), make a very serious presumption. I have not found confirmation of this tendency among my resources, but those resources do cite the destruction caused by Black Vultures raiding the rookeries of herons and ibises.

The ugly feather-less heads of the vultures are an adaptation to their feeding style. They often stick their heads inside a carcass. Feathers would be a nuisance ; feathers would get gunked up foul fluids and rancid bits of meat, and would be impossible to keep clean. Hence, these large, avian refuse cleaners and protein recyclers have no feathers on their heads. But, as to their eating dead things - well, so do crows, ravens, owls, hawks, eagles, coyotes, and bears, not to mention many insects, grubs, and so on. 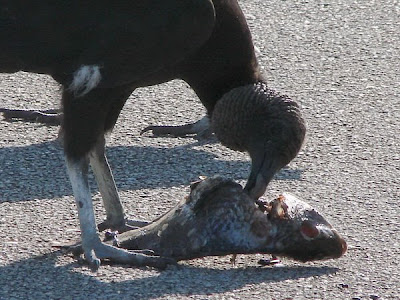 For that matter, I occasionally dine on a juicy piece of meat from a dead bovine.

Vermont birders have been waiting with anticipation for the arrival of the Black Vulture in our state. I haven’t much shared that excitement. I wonder and worry about why they are moving northward: More garbage? More climate warming? More of some change (or mess) made by humans?

Anyway ... look more closely at those big black birds circling overhead. Look for a slight dihedral in the wings, a head but almost no tail, and gray-white at the end of the wings ... you’ll be looking at the newest vulture in the neighborhood.

Email ThisBlogThis!Share to TwitterShare to FacebookShare to Pinterest
Posted by Chris Petrak at 6:00 AM
Labels: Black Vulture, Turkey Vulture

You might have identified my mystery bird! If Black Vultures have made it to Connecticut, they may be in Massachusetts, too. I also want to compliment your photography skills. Your pictures are amazing. I guess I'll have to stop blaming my old Sony H1 for my horrible photos. Great blog!

Wow! What a great post. I love your Black Vultures...I've only seen Turkey Vultures. Wonderful photos!

I saw one this week in Westport Connecticut. The first I've ever seen! Saw enough to clearly see it was not a turkey vulture (by the head). It was feeding on the ground.

Pretty sure I saw 2 of them in the parking lot where I work in Brattleboro, VT. They were perched high atop the building next door on the chimney. They were huge!

June 18 2010, 0900. MGM Foxwoods hotel - 5 black vultures circling between foxwoods and MGM. Have birdseye view as at same altitude as them in hotel room.

On Easter sunday, I saw only 2 black vultures circling at first, then there appeared to be 6 at about 330pm in West Newbury MA near some wet lands. At first I thought red tailed hawks, but they were much darker and larger and after some research I was able to determine they were black vultures, they were an exciting site to see!

I seen one of those black vultures today in Oxford, CT.... I couldnt believe my eyes, i swore vultures only lived in deserts :o

I live I Danbury and I see more them 20 30 every day. Today I finally saw one up front I was in shock there where 4 in this dumpster picking on food I knew they where big, but seeing them so close I was in shock they look very intinmadating.

About 9:30 last night my wife and I heard this hugh disturbance in our carport. We went out with a flashlight only to find a large vulture had crashec into our carport. The bird appeared to be quite stunned and had a blue face. Went out to check this morning and the bird was gone.

I saw three black vultures circling overhead in Middletown, Ct this morning on the way to work stopped at a red light on 66 turning onto 3.

Finally you have solved my mystery!

I am undergoing treatment for Cancer at Danbury Hospital and have seen about 40 Black Vultures roosting and circling above the parking lot. (Needless to say this makes me nervous..given that they start eating before one is finished dying and they are hanging out right outside my hospital window!)

At first I thought they were hawks, but then vultures came to mind. I was thrown off because of the dark faces.

Thank you for a very educating article. I came upon reading this this morning when my daughter, who is a schoolteacher in Stamford Connecticut, posted a picture of some birds that she saw outside of the school this morning in our WhatsApp family chat room and asked what they were. I commented that they look like a form of turkey. Her husband commented that he thought they were some form of wild Turkey, which happens to be my father‘s favorite drink (we are from Memphis). Within 10 minutes, another son-in-law found your article and posted it in our WhatsApp chat room. Again, thank you for the education as I enjoyed learning about this subject of birds.

Ouch, my feelings have been hurt. I am currently crying inside of my soul. As just last night I was showing my mother photos of turkey vultures and specifically, showing her the CUTEST photo I had found... Reading this the next day I felt targeted. My new label is "aesthetically impaired"!
I shall take myself, and my vulture-loving heart to better business. Good day!

Hey! Vultures are beautiful! Vulture chicks, including Black and Turkey vultures are ... adorable. Much more so than human nestlings. Their combination of only partly fluffy, slightly guilty expression and greedy is irresistable to all of us aesthetically impaired vulture addicts..

For the past 10 years, a mating pair of Black Vultures have been living in my silo. They eat from my hands, & are extremely friendly. Each spring they hatch 2 eggs that become adorable little chicks.
I live in Southeastern Pennsylvania, & when they first arrived (10 yrs. ago) I had never seen one. Now, I see more Black Vultures than Turkey Vultures.