Serene Beauty in the Great Egret

Bright white birds waded along the muddy edges of the ebbing water in the tidal marsh. They were distant so few details could be seen except for their dark legs and long sinuous necks. Great Egrets.

I was on the viewing tower at the Connecticut Audubon Center at Milford Point on Long Island Sound. Straight out from the tower was a nesting platform with Ospreys. Three large chicks waited impatiently for their mother to return with food. Dad perched on sentinel duty nearby. Over the distant estuary, I counted eight Osprey circling.

On a grassy edge, a Black-crowned Night Heron rested for the day. Another flew slowly pass. A Glossy Ibis probed the muddy bottom with its long curved bill for some morsel. Gulls foraged here and there.

But always my attention was drawn back to those white waders. A couple of smaller ones were Snowy Egrets. Most were the larger Great Egret.

Audubon knew the Great Egret as the Great American White Egret. Taxonomists recognize it as, “Ardea alba.” The same species is found in Europe where it has been called “Large” and most recently, “Great.” The Great Egret’s closest North American relative is the Great Blue Heron.

The Great Egret is common along the eastern seaboard from southern Maine southward. It is seen along river ways and lakes as far north as southern Ontario. There are breeding records in the northen Champlain region. My personal records are incomplete, but I have seen the Great Egret in early March in the Putney Meadows of Windham County and on Plum Island in Massachusetts, and in late November in Cape May. The species is known to disperse widely after the breeding season is complete, which has brought me reports of large white birds in a beaver pond on Augur Hole Road in mid September.

This handsome white bird is common. Its bright white plumage makes it conspicuous, even at a distance. Many birders, searching for something unusual, slide over it quickly. I often do so. But in my better moments, I linger on this egret as it stalks carefully through the marsh, listening and looking, lifting a foot from the water, stepping with precision. Here is Audubon’s description: “On foot its movements are as graceful as those of the Louisiana Heron, its steps measured, its long neck gracefully retracted and curved, and its silk train reminded one of the flowing robes of the noble ladies of Europe. The train of this Egret ... makes its appearance a few weeks previous to the love season, continues to grow and increase in beauty, until incubation has commenced.” 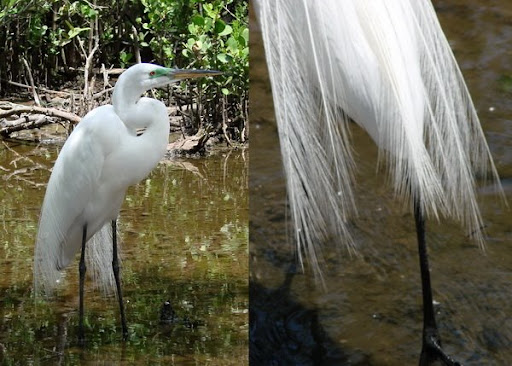 And that is why the Great Egret almost became extinct: beautiful breeding plumage and female vanity (“flowing robes of noble ladies”) fed into human greed. In the mid to late nineteenth century, growing prosperity spurred the middle class to emulate the fashionable elite. Women’s hats became larger and more ornate and were adorned with”aigrettes” (sprays) of breeding plumage from many birds. The Great Egret was one of the favored birds; it was slaughtered by the tens of thousands and the breeding plumage feathers sold to the millinery trade. The carnage of the feather hunters on the egret and dozens of other species was massive. At one sales auction in London in 1902, the packages of feathers sold would have required the killing of almost 200,000 herons.

The Great Egret was one of the first birds whose population was decimated by the feather trade, but hardly the last. In 1886, Frank Chapman, ornithologist at New York’s Museum of Natural History, took a famous walk along the streets of Manhattan. He counted forty native species of birds - often just the wings or tails, but also fully stuffed birds - on the hats of women.

The recovery of the Great Egret has been remarkable, and provides a larger lesson for endangered and threatened species. In general, if we can remove or mitigate the human caused reasons for a species’ decline, the species can then recover on its own (e.g. egrets) or with some help (e.g. eagles and falcons).

With protections in place, the Great Egret seems to have expanded into places where it was historically almost unknown. When Forbush wrote of the Great Egret in the 1920s, he wrote about the bird only from observations in Florida; he says nothing about a New England presence. Likewise, when Bent’s life histories of marsh birds was first published in 1926, the breeding range was restricted to the Gulf Coast states. Prior to the plume hunters, they bred as far north as Virginia and Cape May, New Jersey. Now their breeding range extends much further north, perhaps due to reduced habitat in historic ranges, perhaps a result of more favorable climates in the north. 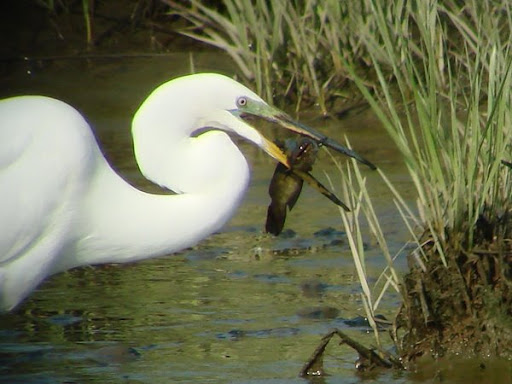 The Great Egret is always graceful and elegant. When I am fortunate enough to get close to the bird (close being a relative term, since they are cautious and wary birds), I am mesmerized by their beauty.

I once watched this three foot wader stalking the shallows during low tide at Brigantine in New Jersey. A sudden strike with long neck and bill, and up came the egret’s beak, gripping a small catfish sideways. The catch was deftly maneuvered, and then swallowed head first, the form of the fish bulging the neck as it slid down. 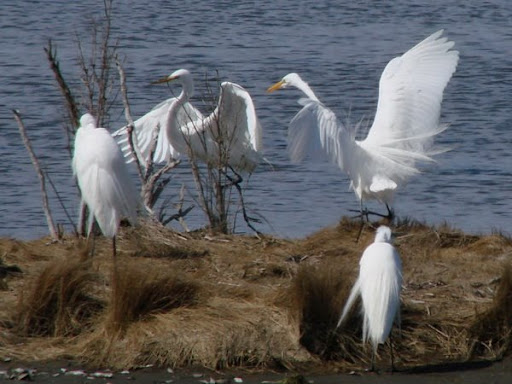 Also at Brigantine, this time in early April, the birds were in splendid nuptial plumage. In the chilly, early Spring breeze, they were tuning up for their courtship displays, long plumes held nearly erect as they practiced their majestic strut and challenged other males.

But at any time, in an early morning glow or an evening sunset, I am mesmerized when an egret is stands perfectly still in quiet pond or puddle waters. His white form reflects off the surface, and the real becomes the mirrored. Those are moments of exquisite peace, when time is as still as the Great Egret and life is serene. 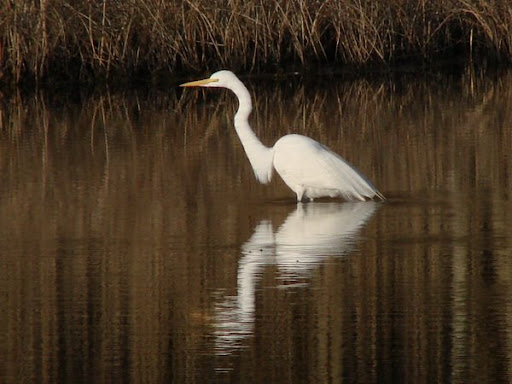 Email ThisBlogThis!Share to TwitterShare to FacebookShare to Pinterest
Posted by Chris Petrak at 6:00 AM
Labels: feather trade, Great Egret

Such beautiful birds. A sad history that I had not realized. Thankfully the species was not lost.

I too am always awestruck at the beauty of the Egret. Not sure I've ever been able to get very close to one though. Seems they can be rather elusive.

When I review these histories, I sometimes wonder how any of our wildlife survives. Thought provoking post with beautiful images. Gorgeous birds.

Great post..very informative..awesome pics.
Thank goodness someone noticed how crazy this was..how absurd...killing these creatures for hats..for vanity..
I supposed we still do things like that...what a shame.

Such stunning photos Chris! I have never seen that many Great Egrets gathered together in one location before and its quite the site to see!

Photos are fabulous! As is your informative blog--very enjoyable!

wonderful photos and great information - thanks

...beautiful captures and wonderful narrative. One of my favorite birds. I love that lime-green eye patch...

Great photos and information. Is the last line a quote of yours? "Those are moments of exquisite peace, when time is as still as the Great Egret and life is serene." or someone else's?