During our long morning of birding in Somerset, we heard Winter Wrens in every dark wood and tangled spruce thicket. The long, complex song of musical trills tumbled through the dank forests, so many notes falling over one another that you have to wonder how the small lungs can contain so much air to sustain the sound for so long. 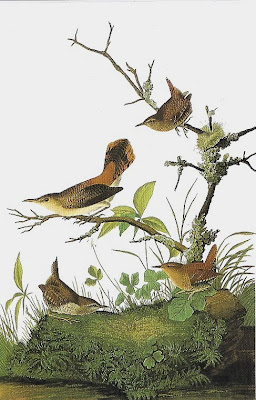 By noon, the mountain clouds were finally being dissipated and patches of sun light filtered through the thick canopy of leaves. Even so, most of the forest was still in dark shadow; undergrowth was limited only to the most shade tolerant species. When a Winter Wren burst into song only a few feet from the trail, we went in search, approaching from different directions in an effort to surround the sound. He sang - first to my left - then to my right - then behind me - in front of me - to my left again. Somehow moving about, dematerializing and rematerializing. Or using some elaborate system of audio speakers, flipping switches from one to another to the next. Or with a ventriloquism that makes Charlie McCarthy or Lambchop look like real dummies.

Finally, on a thin twisted branch of a fallen hemlock, I saw a brown nodule quivering. The Winter Wren tilted its small body upward. Its stubby tail was cocked high. Its upturned beak shivered. Its throat quavered. The energy pulsed through its wings as it teetered and bobbed through its song. Note after note tumbled forth. I whispered reference marks to my companion, and then we both watched as this secretive little bird of dense woods poured forth his big song, from one perch after another - pausing only occasionally to do a quick foray beneath the log - or perhaps to check on a mate or nestling.

Finally we left him to his long, busy, contralto aria. Picking our way back to the trail we murmured something about a favorite bird.

The Winter Wren is a troglodyte. Troglodyte applied to a person suggests one with the character of a savage cave dweller. Troglodyte - or more specifically, “Troglodytidae” - is the Family name for the “Wrens” and derives from the Latin for “one who crawls into holes.” Most wrens, as a Family, use enclosed spaces for their nesting sites, such as tree cavities, holes among rocks, sometimes holes in buildings, or they build their own cavities, typically globular masses with side entrances. 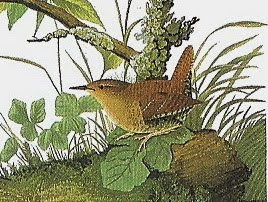 As Kenn Kaufmann puts it, wrens are busy little brown birds, creeping about in thickets or peering out furtively from brush piles. They always appear to be up to something. That is of course, if you are able to see them. The generally drab nature of the wrens’ plumage is counterbalanced by their superb singing skills. There are about 70 species of wren, most of them in the tropics, and all but the Winter Wren (known in Europe simply at the Wren) are limited to the Western Hemisphere. Our Winter Wren sings a rich and complicated melody. But imagine - in the tropics one can find the Flutist Wren, Nightingale Wren, and Musician Wren!

The Winter Wren epitomizes the troglodyte nature of the Wren Family. Its full scientific name (Family, Genus, species) is “Troglodytidae Troglodytes troglodytes,” which might be translated as “one who creeps into holes, one who creeps into holes, one who creeps into holes.” At about 4 inches, the dark Winter Wren is the smallest of our local wrens - a “stub-tailed gnome that haunts northern evergreen forests in summer ... hard to see, creeping like a rodent under fallen logs, through dense thickets, along streambanks.” (Kaufmann) In spite of its name, most leave our area for the winter months, although a neighbor often has had a Winter Wren wintering in the cavities of his woodpile, and one winter thaw day, I spotted one disappearing into a hole in a sandy bank.

In addition to the Winter Wren, three other members of “Family Troglodytidae” are found in our neighborhood of southeastern Vermont: House Wren, Carolina Wren, and Marsh Wren. 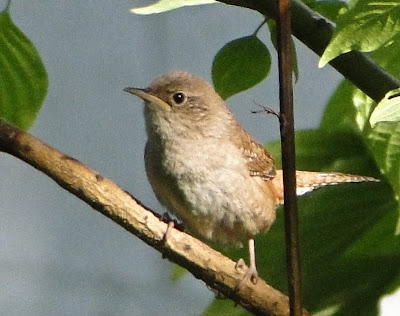 The closest relative to the Winter Wren is the slightly larger (4 ½ inches) and familiar backyard bird, the House Wren (Troglodytes aedon). Very early in the European settlement of North America, it received its common name because of its tendency to nest around homes or in birdhouses. The House Wren is an active and inquisitive bundle of energy. Its short tail held high, it bounces about, pausing often to sing its rich bubbling song.

Sibley describes vocalization as the wren’s primary defense mechanism (no “Speak softly but carry a big stick” strategy for this Family). If loquacity doesn’t work, the wren will employ physical confrontation. Last week, I watched a House Wren in my backyard drive away several intruding cowbirds. After the first brood had fledged, the House Wren had gone to work on another nest. The cowbirds were looking for a nest to parasitize or to rob. The House Wrens were having none of that. When the Brown-headed Cowbird - House Wren confrontation was over, I walked over to the nest box. The female looked out at me; she had sat tight on her nest while her mate defended his territorial prerogatives.

As much entertainment value as the House Wrens provide in my backyard, I have mixed feelings about them. They are so aggressive in defending their territory that they will often puncture the eggs of other birds nesting nearby (including those of other House Wrens). They are not feeding on the eggs, just destroying them, in an effort to protect their neighborhood and perhaps confuse predators with abandoned nests. 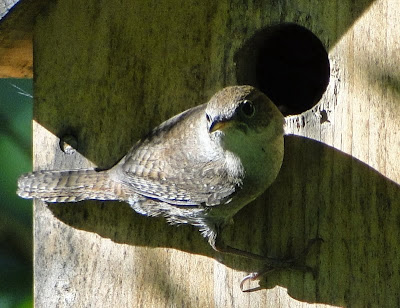 A few years ago, I watched a serious neighborhood dispute between House Wrens and Black-capped Chickadees. Several times the chickadees were driven out of boxes in which they were attempting to nest. I thought the dispute had finally been resolved when the wrens were busy caring for nestlings and the chickadees were lining yet another box with moss. But after the wren-cowbird confrontation, I checked the box where the chickadees were most recently trying to nest. The cup of soft moss was empty - no eggs, no nestlings, and no adult chickadees. When I closed the box and walked back to the house, the House Wren, hidden somewhere among the leaves of the apple tree, rollicked his song, proclaiming his dominance.

Like his close cousin, the Winter Wren, you may not be able to see him, but you always know when he’s in the neighborhood.

Email ThisBlogThis!Share to TwitterShare to FacebookShare to Pinterest
Posted by Chris Petrak at 6:00 AM
Labels: House Wren, Troglodytidae, Winter Wren

Hi Chris, this is a very nice and interesting post... We only have the winter wren here and not chickadee, so no such a fight as yours ;-)

I love wrens! and this post was a great one. Last winter I had a very brief and unusual glimpse of a Winter Wren. The more usual ones here in the Rio Grande Valley are Carolina, Bewick's, House and Cactus. The Carolina is the most common in our yard and my favorite. Once it came inside for a visit and has nested in unusual places including my neighbor's pants pocket!
Kay

Very informative piece. Wrens are delicious little birds. I had a Carolina wren for an entire winter here in midcoast Maine, highly unusual. I couldn't get enough of watching it. I also photographed a Rock wren in Aspen, Colorado - adorable.

I never knew that Winter Wrens were such bad neighbors.