Little Brown Jobs - Here's the IDs on the Sunday and Tuesday posts. Scroll down for last week's IDs, or go further to see Quiz 1 & 2. Thanks for dropping by.

#11 - Chipping Sparrow, non-breeding adult, late October. The cap is not the deep red of a breeding adult, but still very rufous, more so than that of the juvenile. In late summer and early fall, the juveniles I see in the yard are even plainer than this bird, which leads me to say this is an adult. Note the clean, grayish breast -  an important field mark so as not to confuse this sparrow with a similar winter sparrow. 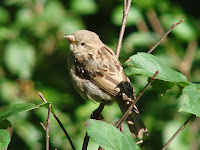 #12 - House Sparrow, female - A bird that birders love to hate, although that is not fair to the handsome male, and the fact that in NA this bird has adapted to harsh environments, such as inner cities. She is dingy brown, but lighter stripe behind her head is a good field mark. Also, a big head, stout bill.

#13 - Lincoln's Sparrow - Looking at the head, one might think Song Sparrow, but the supercilium is a much broader gray, the streaking on the breast is crisp and thinner, and the breast is buffy. It is smaller than the Song, more delicate; its beak is more pointed. Even so, this is a difficult bird for me, because I do not see it often. Even when I chased down breeding Lincoln's in the Green Mountains this past June, this shy sparrow gave few good looks. It is always something of a surprise to see one in my neighborhoods, though I suspect I may be overlooking it because I don't expect it. 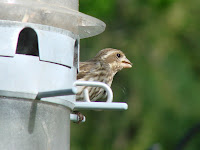 #14 - Purple Finch, female - Quite a contrast to the deep, red wine color of the male. She is similar to the female House Finch, but stouter, more heavily streaked. The stripe above the eye is a good field mark. I sometimes think of her as a scaled down version of the female Rose-breasted Grosbeak. Her finch beak is larger that the House Finch; Pine Siskin beak is smaller and pointed.

#15 - Brown-headed Cowbird, female - Larger than most LBJs, this blackbird is another bird that birders love to hate, which is unfair because she finds so many more nests to drop her eggs into due to our radical alteration of the landscape. She is a dirty brown-gray, or gray-brown. I photographed this bird on the back of a horse. She was in a mixed flock of female cowbirds and female House Sparrows; it was a flock of nondescript birds. Either species could have been overlooked in the colorless plumage and songless calls.

#16 -  American Tree Sparrow - Very similar to the non-breeding and juvenile Chipping Sparrow, but considerably larger, with a bi-color bill, a warm tan wash along the flanks, and a distinct, isolated dark spot on the breast 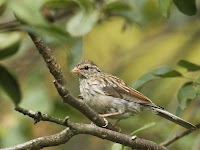 #17 - Chipping Sparrow, fledgling - This was a very young bird just recently out of the nest, photographed in mid-August. It was being fed by parents. Even without those helps, the strong, dark eye-line remains a good clue to ID.

#18 -  House Sparrow, male - Putting aside prejudice, this introduced species is handsome, and the black bib and bold pattern is distinctive.

#19 -  Pine Siskin - goldfinch in disguise. Pointed beak, strong streaking, and hints of yellow in the wings, set this finch apart from other finches.

Haha!!
Just in time for the answers!
Wel done and great idea!
I wish you a Merry Xmas an many more interesting shots to take!!
Cheers, Chris!