In early July we took our oldest grandson to Yellowstone National Park. A resident of Philadelphia, he especially anticipated seeing wildlife and he was not disappointed: bison, elk, deer, antelope, and moose excited the young man whose city wildlife is limited to aggressive gray squirrels.

The wildlife that especially grabbed him was the raven. Ravens are common in Yellowstone and many are accustomed to people, so to those who want to observe them, they are very observable. Few tourists in the park give the ravens much attention. But something triggered within our grandson when he watched the ravens. He became alert to the dark spot in a tree top and the silhouette against the sky. He quickly recognized their vocalization and became alert when he heard them.

One late afternoon, we were in a visitor’s center. My wife and I labored through the displays on the 1988 fires which burned through so much of the park. Julius did a rapid absorption and headed to the bookstore. On sale were videos on many different aspects of the park. Julius watched previews of the videos.

When I joined him, I asked what had especially interested him. He told me that the video had shown a bison which had fallen through the ice and died. A grizzly bear pulled the carcass from the water and had a meal. “A raven watched the whole time,” he said. His tone was that of one who becomes alert whenever a special interest (a raven) appears in a narrative.

I asked him, “Did the video explain how the bear knew the dead bison was there.”

For many millennia, people who have shared their world with Raven have watched Raven carefully. They have seen Raven’s wit and wisdom, Raven’s resourcefulness, Raven’s benevolence and malevolence, and they have told tales.

A scientist may object to the story I tell you, but I am not a scientist. I am a spinner of yarns and a teller of tales. Here is the tale from the old generation to the young generation. 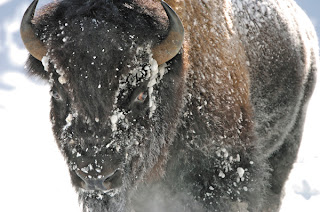 It had been a hard winter. The cold was colder and the snow was deeper. Young Bison had struggled. He had spent much of the winter in a warm thermal valley where the snows were not quite so deep, but where the grass was sparse and its nutrition poor. Bison survived winter, but he knew that he needed good, nutritious grass soon if he was going to replenish his strength. Across the frozen river, the sun was melting the snow on the south facing slope. Good pasture was reappearing. Bison began to move.

The lure of the pasture, Bison’s hunger, and Bison’s weakness after the long winter, made Bison less cautious than prudence would dictate. The thinning ice on the river gave way beneath him and he crashed through. Bison struggled to gain footing. Again and again Bison tried to find leverage on the edge of the ice to pull his bulk from the cold water. Bison struggled for hours and grew weaker and weaker. The struggle ended and Bison died. 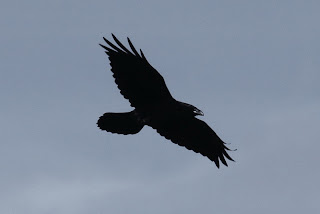 Raven circled high overhead. Raven watched the futile struggle by Bison. “Cur-ruk,” called Raven, summoning others from his tribe. “Cronk, cur-ruk,” Raven said, announcing the opportunity for feast. In the death of Bison, there was nourishment for others. But Raven also knew that help was needed. Raven would be unable to tear through Bison’s thick hide. Wolf pack was far away, and Wolf Pack would be unable to retrieve Bison’s huge body from the river. Raven circled and pondered briefly. “Cur-ruk,” he announced to his tribe. “Bear has come from his den. Bear is strong. Bear is hungry. I will bring Bear. When Bear has eaten, we will eat.”

So off went Raven in search of Bear. High in the sky, Raven’s keen eyes could search vast areas of the wilderness for Bear. On the side of a mountain, Raven spied a dark spot moving down slope through the lodgepole pine forest. “Cronk, cronk,” Raven called down from high overhead. Bear glanced skyward. “Ah, Raven,” thought Bear. “You need my help.” 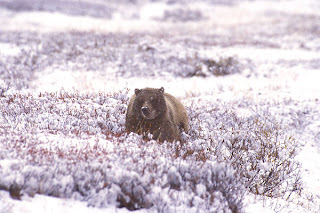 Raven circled lazily overhead, calling directions to Bear from time to time as Bear lumbered through the deep spring snowpack toward the river. Bear heard others from the Raven tribe gathering, for Raven tribe was social and talked often of current affairs. Bear also heard Magpie, Raven’s cousin, equally talkative and equally opportunistic.

As he neared, Bear saw that Eagle had also joined Raven tribe and Magpie tribe on the river ice and river bank. Without hesitation, Bear went to the half-submerged body of Bison. Bear’s long claws gripped the massive body of Bison. His huge strength tugged and pulled the dead weight of Bison from the water onto firm ice.

Then Bear feasted. His months of fasting had left him famished. He tore through the thick hide of Bison and ate. Raven who had led him to the feast, waited, as did Raven tribe and Magpie tribe and Eagle. They did not wait quietly, but they waited and would continue to wait until Bear had eaten all he wanted to eat. No one would dispute Bear having his fill first.

Another also waited. On a hilltop overlooking the river, Coyote sat and watched the riverside gathering. When Bear finished and moved away, Coyote would approach - perhaps. Coyote also studied the valley for a sign of his deadly enemy, Wolf Pack. Wolf Pack hated Coyote, and only extreme hunger would cause Coyote to dare risk the presence of Wolf Pack. 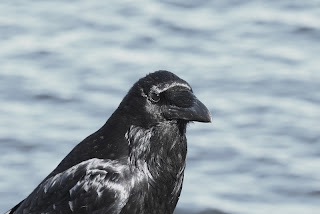 After time, Bear had eaten his fill. He looked at Raven and with a low growl he said, “Thank you, Raven. Now you eat.” Bear stood guard over Bison while Raven ate. Raven tore meat from the bones and swallowed. “Cur-ruk, cur-ruk” said Raven to Bear. “May it go well with you, friend Bear.” Then Raven picked a piece of meat and flew off. He would cache it against a return of winter. 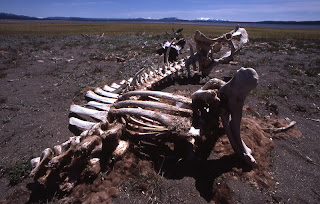 Bear turned and moved away. Raven tribe and Magpie tribe and Eagle moved in to feed on Bison with urgent disorder and raucous squabbling. From the hilltop, Coyote approached. He, too, was hungry. Bison would sustain the life of many. In a few weeks, when his bones were beginning to bleach in the sun, tufts of his winter coat would line the nests of many birds. Bison was unable to sustain his life, but he gave sustenance to many other lives.

Circling high over the valley, Raven saw many signs of life emerging from its winter dormancy. He also watched as the brown spot of Bear moved into the forest. To no one in particular, Raven said, “Cur-ruk.”

Email ThisBlogThis!Share to TwitterShare to FacebookShare to Pinterest
Posted by Chris Petrak at 6:00 AM
Labels: Bear, Bison, Raven

Great story, Chris. I agree with your grandson about the ravens - they are fascinating to watch.

I just spotted something amusing on your blog layout and I am sure you did it on purpose - your profile photo is a profile! Took me long enough to catch the pun. ;-)

A really telling tale, life comes in full circle in the wilderness. From the top of the food chain to the bottom all have their order.
" A Great story "