More on the Mourning Dove 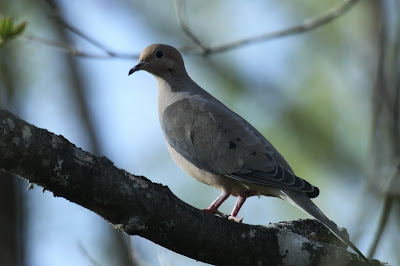 A few years ago I was at a friends home on Timson Hill. He led me into a bedroom and pointed through the window to a spruce tree just on the other side of the glass. On the flat branch of the needle covered branch was the nest of a Mourning Dove. She was on her eggs and seemed unconcerned about the oglers peering through the window.

It was not much of a nest. It looked like a disorderly jumble of small sticks and twigs hastily placed on the branch - like an indigent’s camp beneath a bridge, designed with impermanence in mind. But the nest served its purpose. As the season progressed, my friend reported that two young doves fledged, and when they were gone, the nest was used a second time.

To the degree that a Mourning Dove has any place in folklore, it is as a “love bird.” To anthropomorphizing eyes, the mated pair appears very affectionate, and in fact, a mated pair seem to remain together during the entire breeding year. 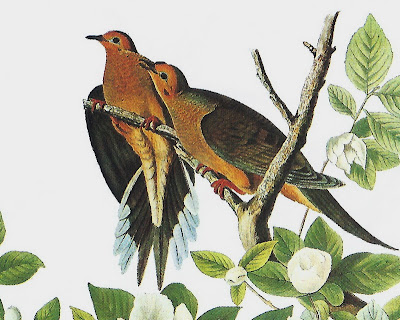 With his flowery prose, Audubon described his painting of the Mourning Dove (which he knew as the Carolina Turtle-Dove): “I have tried, kind reader, to give you a faithful representation of two as gentle pairs of Turtles as ever cooed their love in the green woods ... Look at the female, as she assiduously sits on her eggs, embosomed among the thick foliage, receiving food from the bill of her mate, and listening with delight to his assurances of devoted affection. Nothing is wanting to render the moment as happy as could be desired by any couple on a similar occasion.

“On the branch above, a love scene is just commencing. The female, still coy and undetermined, seems doubtful of the truth of her lover, and virgin-like resolves to put his sincerity to the test, by delaying the gratification of his wishes. She has reached the extremity of the branch, her wings and tail are already opening, and she will fly off to some more sequestered spot, where, if her lover should follow her with the same assiduous devotion, they will doubtless become as blessed as the pair beneath them.”

Audubon has perhaps gone too far in his anthropomorphizing of the Mourning Dove, but he does capture the sense of devotion and peace which the doves evoke within us. A hundred years later, Massachusetts ornithologist Edward Forbush was still writing about the doves with a romantic flourish, though toned down from Audubon: 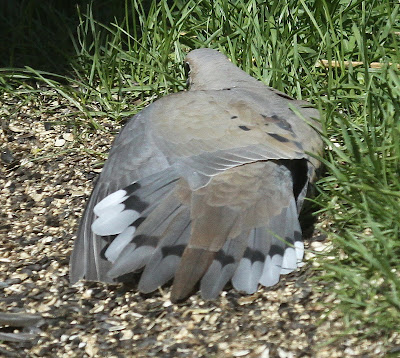 “The male does not cease his attentions to the female when the eggs are deposited, but often brings sticks and straws for the nest and takes his share of the duties of incubation, feeding and brooding. As a rule, after incubation commences until the young are hatched, one or the other of the parents is continually on the nest. When the adult bird is frightened from the nest by an intruder, it may drop to the ground and imitate so well a wing-broken bird as to lead the enemy away, or it may alight on the ground and flap its wings to draw attention. This is most likely to happen after the young are hatched, and in some cases both parent join in the ruse.” (Forbush) 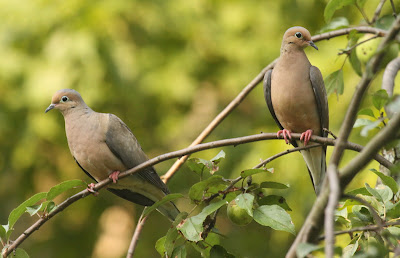 What can be said with a bit more straightforward sobriety is that the Mourning Doves pair early in the Spring and nest early. Sometimes they begin to nest in late March or early April. The male brings the nest material; the female builds the nest. It takes one to three days. Typically, two eggs are laid. Incubation takes about two weeks; both male and female incubate. The young are fed by both parents. From altricial hatchlings (naked and helpless) to leaving the nest as fledglings takes about two weeks.

Mourning Doves, like other members of their family Columbidae, feed their young with “pigeon milk.” “This substance is produced in the crop, an enlarged pocket of the upper esophagus. During the nesting season, the walls of the crop secrete a milky fluid that is rich in fat and protein. For the first dew days after hatching, the young are fed a pure diet of pigeon milk. Then they begin to receive a mixture that includes some partially digested seeds or fruit, but their diet continues to include some pigeon milk for at least a couple of weeks. To be fed, the young bird will insert its bill into the corner of the parent’s mouth, and the adult will regurgitate the pigeon milk or the mixture for the young to eat.” (Kaufman, Lives of North American Birds)

As nearly as I can determined, once the young have left the nest, or very soon after, they are left entirely on their own. In my yard, I will often seen a pair of scaly Mourning Doves feeding on the ground. The scaliness, plus the apparent cluelessness of these birds, identify them as young birds. As the season progresses, the number of young increases. Eventually the adults, tiring of the repetitive parental responsibilities, also join the flock. 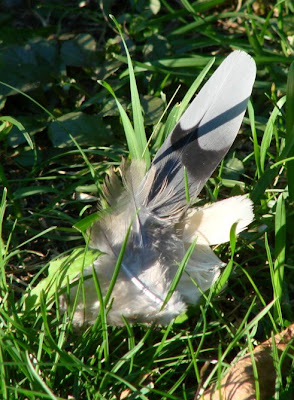 Early in the twentieth century, Mourning Doves received protection along with songbirds. That protection, along with their adaptability and seasonal production of six to twelve young has made them one of the most common birds in North America. And that in turn, has been good for other birds.

A few mornings ago, I was awakened by Blue Jays. They were making a hellagious racket. Somewhere nearby, there was a hawk, and the jays were sounding the alarm. Warned by the jays, the doves all departed the yard. Doves do not always have the good fortune of sentinel jays. One afternoon when I was sitting by the river, I glimpsed a Sharp-shinned Hawk crossing overhead and circling through trees. Later when I returned to the house, I found a pile of dove feathers on the lawn. One of those slow-moving, clueless young Mourning Doves became a meal for nestling Sharp-shinned Hawks. 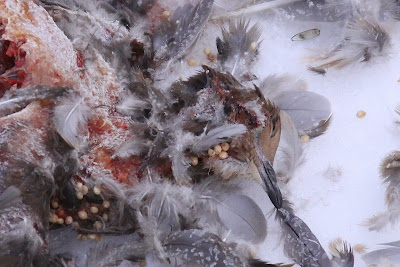 As the season progresses, those young doves will become practice prey for novice young hawks. Last year as winter began, the flock of Mourning Doves which gathered in the trees around my feeders numbered about thirty birds. By late February, half that number gathered in the trees. Feather piles and red spotted snow were tangible signs that the bird feeders had attracted other feeder birds, like the Sharp-shinned and Cooper’s Hawks. The Mourning Dove was filling its place in the ecology around my home.

Email ThisBlogThis!Share to TwitterShare to FacebookShare to Pinterest
Posted by Chris Petrak at 6:00 AM
Labels: Mourning Dove

Awesome Post!!! Lovely to read such delightful information about the Mourning Doves!