The robin may be the most familiar songbird in North America. It nests in our cities, suburbs, towns, and villages. It inhabits our farms and gardens, our prairies and mountains. It is at home in old growth forests, second and third growth forests, brushland, grassland, seashore, lakeside. A ten inch gray bird with an orange or reddish breast is immediately recognizable as a robin.

A hundred years ago, Forbush wrote of the robin: “he knows all the folks and they all know him. Why then should one write about his haunts and habits, which should be well known to everybody? In answer to this it may be said in truth that most people really know very little about him.”

Consider, for example, these half truths about the robin:

- Robins go south for the winter.

- Watch for the first robin of the year; it will be a sign that Spring is coming.

In the big city of Detroit where I grew up, the robin was one of the few birds I recognized. I watched the robin run on the grass, pause, listen, peck at the ground, and pull out a earthworm, then fly to its nest in the elm where it fed its young. As Fall made the transition to Winter and the ground began to freeze, the robin disappeared. It had gone south. In March, the first robin running across the lawn and pulling up an earthworm was soon followed by daffodils and tulips. Everybody knew these truths.

But they are all half truths. When raising its young, the robin needs protein and will gather that protein from whatever source is handy. This summer I have watched robins gathering protein from the lawn around my home, from urban parks, from mountain meadows, from grassy prairies, from forest floors, from steaming geyser basins. I did not see a single robin pull an earthworm from the ground. I saw them with beaks full of grubs, small dragonflies, and all other manner and variety of insects and creepy crawlies. 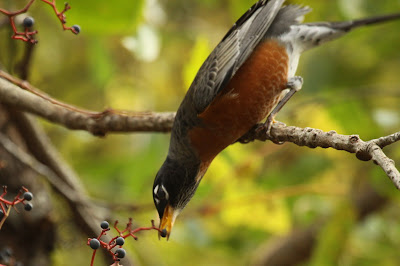 Hot summer weather is followed by the cold of winter when the insect protein disappears. That means the robins have to go south where the weather is warmer and they can find insect food. Right?

Wrong. Most of the year the robin diet consists of fruit: “there is hardly a wild fruit of any kind produced in the North that Robins do not eat, swallowing pits and seeds of the smaller fruit with the pulp and ejecting the undigested parts through the mouth. Thus they become distributors and planters of nearly all our wild fruits.”

Forbush continues on the robin’s diet: “Its percentage of vegetal food is larger than that of any other American thrush. This vegetal matter is mainly fruit, which constitutes over fifty per cent of the entire aliment for the year, but more than four fifths of this is wild fruit.”

In other words, for most of the year, the robin is vegetarian. 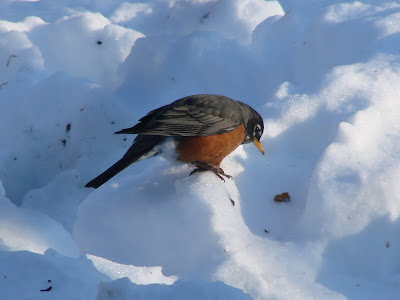 It is true, but misleading, that robins go south for the winter. It would be more accurate to say that the robin population shifts to the south. The birds which breed in our neighborhoods leave, often to be replaced by robins from the boreal forests to the north. Many robins spend the entire winter in New England. They roost among the evergreens, feed on winter berries, and come into the fields or towns when the snow retreats during a thaw. Hence, the annual January question: “I saw a robin. It is not even close to Spring. What’s it doing here?” Simple answer: Living on the fruit of the land. I have photographs of the robin in my yard every winter month; it feeds on apples from the old apple tree and dried up crabapples. It picks rose thrips and winterberries. 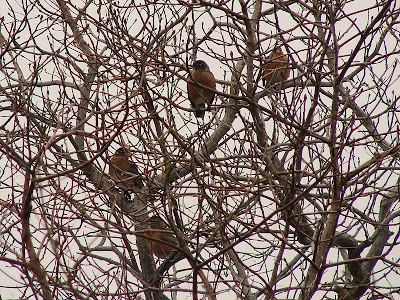 A single robin, or even a small flock of robins, is not a sign of Spring. However, beginning  roughly in mid-March, robin flocks begin moving north. They travel up the river valleys, moving from tree to tree and bush to bush, feeding on the remaining fruit and emerging insects. As Spring inches into reality, they swarm across the damp fields and grassy spreads where snow has just melted. As they forage, they give me the impression that they are oriented toward their goal somewhere to the north. The robin flocks are among the first songbirds to arrive in the Spring, closely following the Red-winged Blackbirds.

As they move northward, the flocks begin to disperse. Like many other songbirds, the robin goes through a personality change. He has spent the Fall and Winter in amiable association with others of his kind, benefitting from many eyes in the flock watching for danger and many individuals searching for food. But when he alights in my old maple tree and begins to sing, that all changes.

When the robins sings, the breeding season has begun. The males with whom he spent the Winter with are now rivals. He pursues them. Jealously he battles them. His territory belongs to him, and he excludes all except his mate.

And so ... when the robin flies near your home and sees another robin, he will battle that robin and chase it from his territory. It matters not a whit if the robin who has invaded his realm is merely his own reflection in one of your windows. He will attack it day after day after day.

For several years robins nested in a bush next to our home and between two windows. For weeks, the male attacked his image, banging against the window over and over and over. The one word explanation is testosterone. The hormonal driven impulse to protect his exclusive breeding rights trumps all sense and reason. 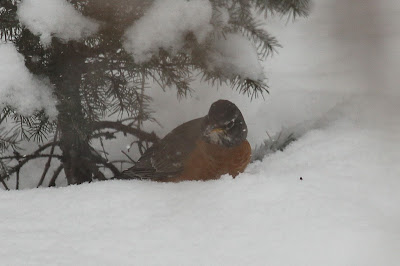 The robin eats whatever protein rich food it can find, including the occasional worm. Most of the year, it eats fruit. The robin goes south for the winter. For some robins, New England is the south; robins may be seen during any winter month. The first robin of the year is not a sign of Spring (especially in the middle of January), but when the robin flocks move up the river valleys, Spring will be along shortly.

Email ThisBlogThis!Share to TwitterShare to FacebookShare to Pinterest
Posted by Chris Petrak at 7:28 AM
Labels: American Robin