The Mourning Dove is common is our yards, fields, and towns. It is part of the background and as such, it is often overlooked and taken for granted. I am guilty of that. In a dozen years of writing this column, I don’t think I have ever given the Mourning Dove exclusive attention.

“The mourning dove must have been one of the first birds that attracted the attention of the early settlers when this country was new and wild. They must have recognized the bird as not far removed from some of the Old-World species of pigeons, and its notes must have recalled to them their old home. The writers of these times speak of the bird familiarly, especially as a game bird that relieved the hardships of pioneer life.” 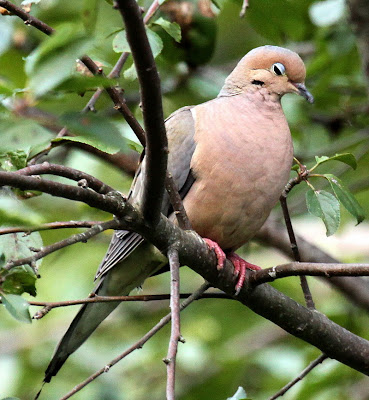 With those words, Bent begins his “Life History” of the Mourning Dove. In Bent’s history and in the writing of other earlier observers, the impression that comes through is that the Mourning Dove is just an assumed part of the landscape and as such does not receive a great deal of attention. It was sometimes called a “turtle dove,” by early colonists because of its resemblance to European turtle doves. The repeated “coo, coo, coo” sounded sad and mournful to colonists homesick for their native land; “mournful” adhered to the dove.

The Mourning Dove’s “coo, coo, coo” is sometimes heard as a “hoot.” As you know, owls “hoot” in popular parlance. On a number of occasions I have had non-nature type people tell me they have heard an owl, leaving me the mournful task of explaining that what they have actually heard is a Mourning Dove.

In addition to its hooting “coo,” the mourning dove also “whistles.” The whistle is not a vocalization; it is produced by the wings when the bird takes off.

Whatever imagined sadness the Mourning Dove may have been “cooing” about to earlier generations, it was viewed by them primarily as a game bird.  John James Audubon painted his Mourning Doves as loving and devoted couples, and then with his typical disconnect, described their tastiness: “The flesh of these birds is remarkably fine, when they are obtained young and in the proper season. Such birds become extremely fat, are tender and juicy .... These birds require good shooting to bring them down, when on wing, for they fly with great swiftness, and not always in a direct manner. It is seldom that more than one can be killed at a shot when they are flying, and rarely more than two or three when on the ground.”

Apparently the gunning skill required to shoot Mourning Doves is what still makes them a game bird in many states. It certainly is not, and never was, a major source of food. At just over four ounces in weight, feathers and all, it would take a lot birds to make a meal.

By the early twentieth century the Mourning Dove’s numbers were severely decreased in New England. In 1908, it received protection in the northern states as a songbird, allowing its numbers to increase. Today in appropriate neighborhoods in our area, it can be considered common, to very common, to abundant.

The Mourning Dove ranges throughout the United States and Mexico. In southern Canada  and the northern United States it is seasonal, breeding during the Spring and Summer and then migrating to warmer climes. 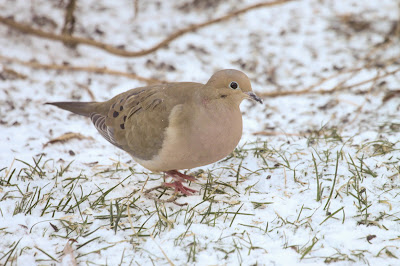 In Southern Vermont, the Mourning Dove can be seen throughout the year, but the birds of the summer and the birds of the winter are not necessarily the same birds. Banding studies have demonstrated that many Mourning Doves undertake a long migration. For example, birds banded in Wisconsin have been recovered in Louisiana and Alabama. Texas to northern Florida is the favored winter home; banded birds recovered in these areas have come from across the northern tier of states, from New Jersey and New York through Pennsylvania, Ohio, Michigan, and westward through the northern plains states.

The migratory habits of the Mourning Dove probably account for its remarkable uniformity across its vast range. The birds mingle and mix during the winter. When they return to the breeding grounds their DNA also gets mingled and mixed. Most modern field guides (Sibley in particular) note racial differences among species especially where those differences are notable in the field. Almost no attention is paid to subspecies of the Mourning Dove because the differences are so slight. Bent describes the western race as slightly paler and slightly larger. But note the word, “slightly.”

Mourning Dove (Zenaida macroura) belongs to the family, Columbidae, from the Latin for pigeon or dove. In general, the larger members of this family are called pigeons; the smaller members are called doves.

The Mourning Dove was named by Charles Lucien Bonaparte, a nephew of Napoleon Bonaparte. When the family fortunes declined after Waterloo, Charles moved to America with his new wife (and first cousin), Zenaide and his uncle/father-in-law, Joseph. He lived in Bordentown, New Jersey and Philadelphia, Pennsylvania. “While residing in the United States from 1822-1828, he re-edited a volume with the longest title in American ornithology ... ‘American Ornithology, or History of Birds Inhabiting the United States not given by Wilson.’” Bonaparte is considered to be the father of systematic ornithology in America. Bonaparte’s Gull commemorates him.

Bonapare honored his wife with the Genus Zenaida. Mated pairs of Mourning Doves exhibit a very close association. An old common name for the dove was “love bird.” Bonaparte may have linked the name of his wife to this dove as a symbol of conjugal bliss.

The species name, macroura, comes from the Greek for “long” and “tail.” Thus the literal meaning of the name, Zenaida macroura, is “Zenaida’s long tail.” The long tail of the Mourning Dove is considered by some to be its outstanding characteristic. When the bird is perched, the tail is long and pointed. Then it takes flight and the long tail flares in an elongated triangle with prominent white tips on the outer tail feathers.

Great post on the Mourning Dove, Chris. They are pretty common in my yard.

An informative article about the Mourning Dove--enjoyed it. It seems a good year for MD babies--I love watching the young ones--walking tight-rope style along the power lines while parents sit quietly nearby.