The Last Day of the Old Year 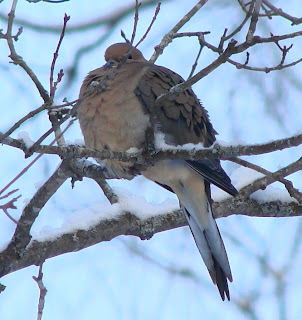 The last day of the old year. I am sitting by the kitchen window watching the snow fall. Later this morning I will go outside and clear the driveway, but for the moment, I just sit. A chickadee comes to the sunflower feeder, takes one, and flies to the red-twig dogwood. The small bill pounds on the seed until it cracks open, yielding the kernel inside. The shell drops to the ground. When the Spring thaw is finally complete, I will find the barren ground littered with sunflower shells. Now the debris just disappears into the pristine snow. The chickadee returns to the feeder for another seed, but flies further off. He does not return. There are no birds at the feeder. It is quiet.

When the day had finally lightened, I came down for my second cup of coffee. There were more birds stirring at that first light. A couple of chickadees, a junco, a redpoll, a pair of tree sparrows. They had surely just emerged from their nighttime roost and were quickly replenishing their fat reserves. The feeders needed attending, so I bundled up and went out. I tramped a path among the feeders with my snowshoes, swept the snow from the platform, filled the mixed seed feeder, and replenished the suet. A chickadee seemed to say chatter a “thank you,” so I gave it a “you’re welcome.” I spread some seeds on the covered porch for the ground feeders, and returned to my winter roost.

I have not been doing much bird watching recently. The home was full of family for the holidays. The children needed tending, feeding, changing, and regular nose wipes. They needed help getting in and out of snow suits, making a slide for the snow saucers, and finding carrots and coals to provide their “Frosty” with eyes and nose. They are active, irrepressible, creative, sometimes cranky, but more often fun. And generous - they brought lots of germs with them and shared them freely. And now they’ve gone to their homes, and I snuffle their gift. The house is quiet. With my coffee, I sit by the window, and finally have time to watch the birds. But the birds are gone and the only sound is the snow falling silently beyond the window.

A Downy Woodpecker comes to the suet feeder. No red spot brightens the back of the head, so I know this is a female. Her mate comes soon after. A small flock of chickadees hurries in. With each trip to the sunflower feeder, they return to a branch, and the piled snow is knocked loose, dropping to the ground with a silent plunk. I can hear muted conversation through the window. A pair of nuthatches land on the platform. A wandering flock of our wintering birds has made a visit. 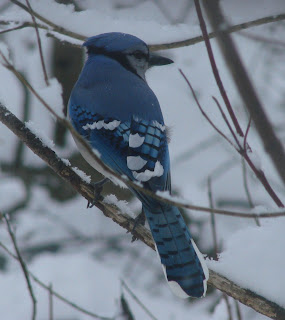 That is typical. Our wintering birds gather in mixed flocks and forage over a wide area during the day. Black-capped Chickadees, White and Red-breasted Nuthatches, Downy Woodpeckers - see or hear one and you are likely to see or hear the others in the woods or around the feeders. Less conspicuous, but often accompanying these flocks, is the Brown Creeper; it does not come to the feeder, foraging along tree trunks and branches throughout the year. Golden-crowned Kinglets are often present in these flocks, and Blue Jays may not be far away. Foraging is a full-time activity during the short winter days and food is often scarce. Individuals are helped in their foraging when others are looking for food. Multiple eyes can watch for predators. If a wintering Sharp-shinned Hawk is hunting, the odds of being alerted to its presence are greater if vigilance is shared with others. The odds of surviving are also better if there are ten birds, rather than one, or twenty rather than two.

Not all wintering birds join mixed flocks. Doves and pigeons stay with their own. Separate flocks of about a dozen each are regular in my yard, but around towns the numbers that join together may be in the hundreds. Cedar Waxwings form large flocks, often of fifty, a hundred, or more. The waxwings are very nomadic in the winter, but when you come upon one, you are likely to come upon many.

The wintering finches which have so many New England birders excited this year also tend to form homogenous flocks. Pine Grosbeaks, Evening Grosbeaks, and Snow Buntings are generally with their own kind, although Horned Larks and an occasional Lapland Longspur may be found with the buntings, or with each other, or by themselves. Likewise Common Redpolls tend to flock with their own kind, though I have also seen Pine Siskins and American Goldfinches with redpolls. Birders will study flocks of Common Redpolls in the hopes that a Hoary Redpoll is mixed in somewhere. 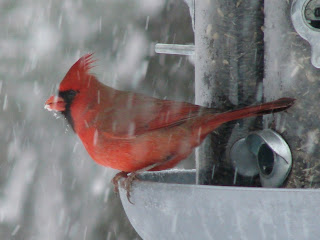 The neighborhood cardinals just came in. They are skittish, seldom staying long on any feeder, and cautious before leaving the protective branches of the apple tree. In the winter landscape, they are so conspicuous, especially the brilliant male. The four females that travel with him don’t stand out quite as prominently as he does, but their rich red and brown plumage can’t be missed against the white landscape. If Prince Cardinal and his harem of four all survive the winter, I wonder how things will be sorted out come spring. A previous generation of observers regarded the cardinals are exemplars of monogamy and family devotions. Recent research shows that most songbirds prefer genetic diversity in their clutch of young. I rather suspect this little flock of congenial cardinals will evolve into a daytime soap opera come April. The females will compete with one another, and the male will try to make them all happy, when not contending with strays males trying to intrude on his menage-a-five.

I finally stirred myself and cleared the drive, hopefully for the last time this year, but only the first time this week. I was delayed a few minutes in my chore. When I first went out, I heard a musical call from a tree top. I have a hard time remembering the songs and calls of the familiar birds and have to refresh my memory several times every year. But this call was not a familiar call that I couldn’t remember. It was, as I said, musical - sort of a “chyew-wee” or maybe a “tew-tew-tew.”
I had an inkling of what I might be hearing, and I finally found a dark silhouette on the top of a branch. I retrieved my binoculars and focused on a male Pine Grosbeak, still whistling his call. 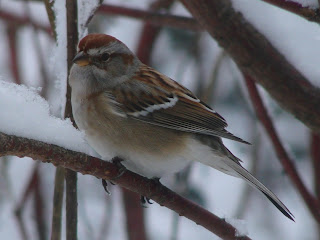 Again, the feeders are quiet. No birds. It is very different from what I see from April through October when migrants pass through, when courtship is underway, when young are being fed, when fledglings are feeding, when flocks are gathering, departing, passing through again. Now only a few residents remain. I saw the young of many of these through the summer breeding season - like the downies, for example. More than one brood from more than one pair enjoyed the seeds and the suet. But not now. Parents may have driven them off - or they may already have succumbed to the harsh, early winter, to a predator, to their own failure to learn to forage and develop their ability to feed themselves.

I sit in my warm kitchen. It’s late morning now. I have switched from coffee to hot chocolate, and the warm cup warms my chilled hands. I watch the last drifting snowflakes. The branches of the pines sag beneath the accumulated snow. It is a winter wonderland, a peaceful fairy landscape. An indulgence which I can enjoy in my cosy winter nest.

For the chickadee that just flew in, there is no pleasant indulgence. Survival is its only concern. I watch him on this last day of the old year, and wish many days in the new year.

Email ThisBlogThis!Share to TwitterShare to FacebookShare to Pinterest
Posted by Chris Petrak at 7:55 AM
Labels: bird feeders, winter birds

I'm impressed by the quality of the pics you include in your blog. Please post info about your camera.

This is great info to know.