Baltimore Oriole on the Suet

This rainy, dreary Saturday became much brighter when a Baltimore Oriole came to the suet feeder, the first time this has happened in my yard. I have orange halves out, but he showed no interest - just the suet. Then a second one arrived. The feeders were trashed by a bear a few nights ago, so I bring them in at night; it's a pain putting them out in the morning when all I really want is my first cup of coffee, but when the oriole started coming throughout the day, I forgot the inconvenience. What a show! Then a second male showed up. I suppose in a few days when they start establishing territory they will not be quite as friendly toward each other, but today they shared the suet with one another, as well as with a Blue Jay, Downy Woodpecker, and White-breasted Nuthatch. Evening Grosbeaks are also regulars at the feeders and brought more brilliant color with the fresh plumage, so I had to include a photo of one. They breed in the neighborhood and last year brought their young around in the late summer. Maybe the orioles will do the same this year. 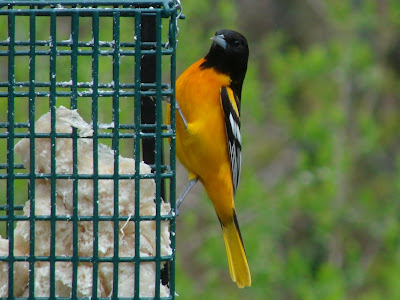 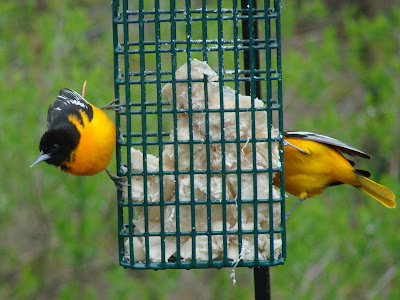 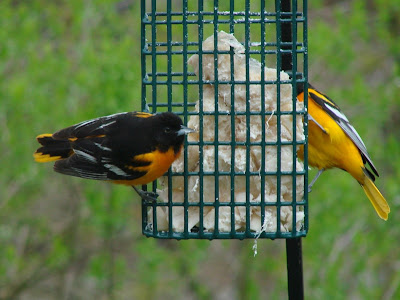 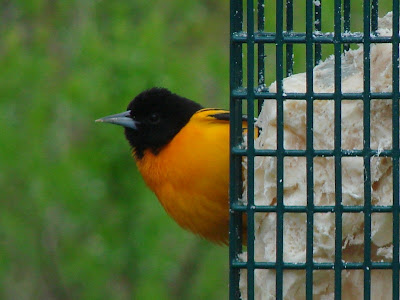 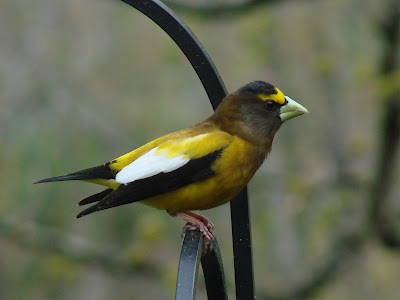 In Southeastern Wisconsin, we have orioles all summer long! We found last year that not only do they love the Welch's grape jelly, but they do love the peanut butter suet that we put out for birds. Even the orioles love peanut butter & jelly!