More Birding on the Dry Tortugas 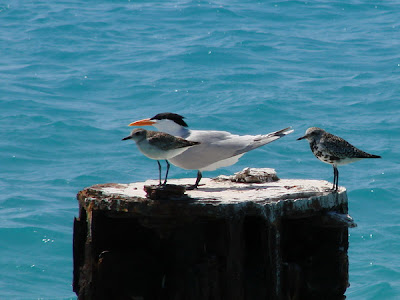 The Dry Tortugas have a reputation for superb spring birding. In addition to the nesting colonies of tropical seabirds which I wrote about last week, these tiny spots of land in the Gulf of Mexico are a resting place for migrating birds.

Eventually I tore my gaze from the clouds of Sooty Terns over Bush Key, the perching Brown Noddies, and the whisper-like flight of the Magnificent Frigatebirds, and began exploring other parts of Garden Key and Fort Jefferson.

On the pilings of the old pier, Royal Terns perched regally, along with several Black-bellied Plovers, most still coming into the breeding plumage which gives them their name. A single Whimbrel briefly showed its long, down-curved bill before tucking it beneath a wing and dozing off in the warm mid-day sun. On the sandy shore, a pair of Ruddy Turnstones, like the plovers not yet into their variegated breeding plumage, turned over stones and seaweed in search of food. A single Spotted Sandpiper flew from the beach where a pair of Brown Pelicans were preening. A Sandwich Tern alighted briefly near the pelicans.

I turned from my vantage point and began walking through the campground. A woman came from around the copse of trees. “Did you see the owl?” she asked with quiet excitement. “It went this way.” 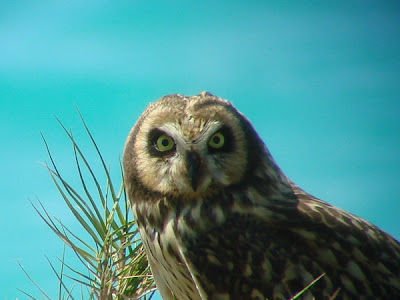 I fell in step beside her. A few yards on, we paused. Perched in the grass was a Short-eared Owl, the West Indian race of this wide-spread species that I have now seen from Massachusetts to the Hawaiian Islands to a remote speck of Florida. This time, however, I could clearly see the short feather tufts which are mis-named “ears,” and which give the owl its name. After a few minutes, it became tired of being stared at and flew off around the walls of the fort.

Inside the walls of Fort Jefferson, the old parade ground is now a grassy expanse with a scattering of trees and shrubs and the reputation for being a spring-time birding hotspot. Most of the visitors to the National Park missed this quiet attraction. There had been no strong weather fronts so there was no songbird fall-out with birds dripping from trees. As the majority of visitors wandered about the old gun emplacements and strolled the top of the fortress walls, they probably wondered about the couple dozen people skulking about with binoculars and spy glasses on tripods or stretched lazily on the grass staring at a tree.

When I first walked into the parade ground, two things caught my attention. Cattle Egrets stalked through the grass. Accustomed to following cattle and eating the insects which the hooves stir up, these long-legged waders were wading the short grass in search of scarce insects. There are few insects on the keys of the Dry Tortugas, and the Cattle Egrets which stop at Fort Jefferson find such slim sustenance that they sometimes take to chasing, and taking, songbirds instead. These Cattle Egrets stayed in the grass, were wary whenever someone began approaching them, and occasionally found something to eat. At least, I did not see them pursing songbirds. They were in breeding plumage with rusty orange patches on the head, back, and neck. Immigrants from Africa to the Western Hemisphere in the late 1800s, they are now widespread in North America and expanding in other parts of the world. 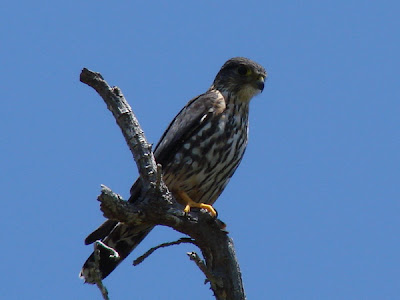 The Cattle Egrets were not stalking songbirds, but songbirds and shorebirds were not free of danger. A dark, fast moving, pointed wing silhouette swept over the walls, circled the parade ground rapidly, and landed on the top of a tree. At the Putney Mountain hawk watch a dark, fast moving, here-and-gone hawk which prompts a “What was that?” reflex ... is a Merlin. On the top a tree in the middle of the Fort Jefferson parade ground, I focused my scope on a Merlin, perched erect and alert. For the next couple of hours this small falcon flew about the fortress walls and returned to perch. It was an adult male, an experienced hunter, and sooner or later he would return with food in his talons.

The same pattern with intervals of hunting and rest was followed by the Short-eared Owl, which used a tree on the other side of the parade ground as its operational base. This past winter, I watched a Short-eared Owl on Plum Island as it defined, on its own, a day of good birding. The owl and the Merlin would have easily made this day at Dry Tortugas National Park a day of good birding. But remember, they came after the hordes of Sooty Terns, the perching Brown Noddies, and the whisper-like flight of the Magnificent Frigatebirds had already defined the day as a good birding day.

The birding wasn’t over, but it did mellow down. I was finally able to turn my attention to the trees and shrubs harboring the songbirds. The numbers and variety were not great, but each different species was something of a surprise, a discovery, often a welcome anticipation what would be awaiting me when I returned to Vermont: Black-and-white and Yellow-rumped Warblers, Northern Parula, Ruby-throated Hummingbird, Eastern Kingbird. 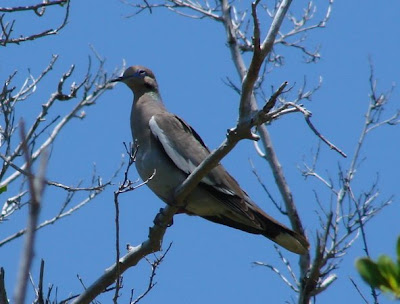 In our northern climes, we don’t pay much attention to doves or pigeons. They are all Mourning Doves or Rock Pigeons. But in southern Florida there are at least three other doves and pigeons, plus tropical vagrants that might show up at any time. The dove atop a tree in the parade ground warranted a closer look, and gave me my first White-winged Dove since my last visit near a southern border.

As the sun climbed high and the day wore on, I adopted a different birding tactic. Instead of wandering around looking for birds, I found a shady spot beneath a tree with a good view of the bird fountain. I sat and let the birds come to me. It is an effective tactic, maybe more effective than barging about and disturbing the birds. 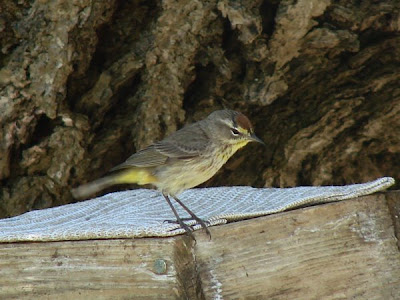 It worked. A Black-and-white Warbler foraged along a tree branch in its upside-down, nuthatch-like manner. A Palm Warbler wagged his tail in Palm Warbler fashion, causing me to mentally reminisce about the tail-wagging Eastern Phoebe which had begun singing outside my bedroom window just before I left for Florida.

Blackpolls came close. I know them as denizens of the high elevation spruce forests, one of the last migrants to pass through the Connecticut River valley where I usually do my birding. Here they were on a tropical island a few feet above sea level. I had to look twice to be sure I was identifying them correctly.

Seabirds, shorebirds, songbirds, raptors - all capped off with a period of lazy semi-somnolent birding - the Dry Tortugas provided a day of excellent spring birding.