Chasing Birds in the Florida Keys

In mid-April, I was in the Florida Keys looking for birds. I had certain “target birds” which I hoped to see. They fell into two categories. The hard to get to, easy to see birds were the ones that required a two hour boat trip to the Dry Tortugas. I’ve written about these the last two weeks, so you’ll have to dig out your old newspapers.

The easy to get to hard to find birds were the ones accessible by car. The American Birding Association publishes a series of bird finding guides. I was using (obviously) A Birder’s Guide to Florida by Bill Pranty. The ABA guides provide very precise directions to the best birding spots within the volume’s area, along with maps and whatever other information might be useful to the bird seeker. So I knew where my target species might be found and I knew how to get to those places. 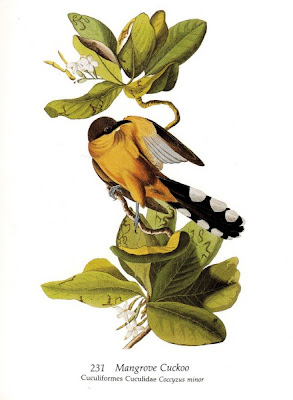 In addition, the Florida Keys are easy to navigate. US 1 runs their length to Key West. There are a few roads off of US 1 on some of the larger keys, but not many. So finding the spots was easy.

Finding the birds was another matter. I missed two of the birds I hoped to see. The Mangrove Cuckoo is even more secretive than the Black-billed and Yellow-billed Cuckoos which sometimes summer in our region and may or may not be seen depending upon the tree caterpillar supply which is their major food source. Plus, the Mangrove Cuckoo lives in mangrove swamps, not easy places to gain access to, though boardwalks in various parks help with the access. I went to many of the places where they purportedly could be seen. I even swallowed my principle of not harassing birds by using song recordings, and played a song recording in the hope that a jealous male might respond. But no success. Mangrove Cuckoos are difficult to locate, require lots of patience, and some luck. So missing the cuckoo was not a surprise.

Nor was it a particular surprise that I missed the Antillean Nighthawk, a close relative of the northern nesting Common Nighthawk. Nighthawks are best seen and heard at dusk. Dusk is my bedtime. Need I say more?

The White-crowned Pigeon is a Florida Keys specialty. Don’t let the “pigeon” part turn you off. This bird still retains all of its wildness. All of the guidebooks talked of the difficulty of seeing this species. The White-crowned Pigeon forages, roosts, and breeds in the tree tops. It is shy and hard to approach. It is most likely to be seen when it flies out of, or into, its nighttime roost, or when it is flushed by something. All of this means that the sightings may be fleeting. 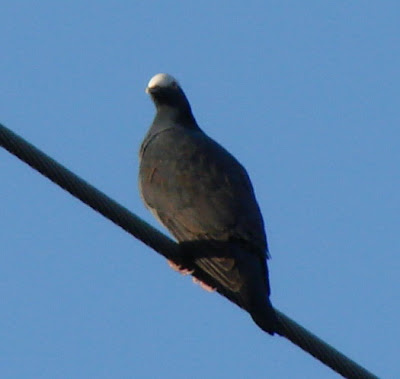 None of these characteristics boded well, although we went to many of the places where it was known to roost, scanned the tree tops of likely foraging locations, and watched for pigeons flying overhead. There are never any guarantees when looking for birds, and I did not expect any with the pigeon.

I took my camera with me when we went for dinner in Key West. We had to see some of the tourist things, and I feel obliged to take some of the tourist-type pictures. There were a few birds to be see, as well: Brown Pelicans on the harbor piers, Ruddy Turnstones on the docks, and Red Junglefowl scavenging among the tables of the restaurant. The junglefowl are still considered feral chickens even though they have been managing on their own on the southernmost keys since the early 1800s.

Late evening as we walked back to our hotel, I noticed a pigeon perched on a power line, then looked more closely. Our binoculars were in our room, so the camera zoom provided the confirmation. It was a White-crowned Pigeon. I managed a couple of adequate photographs, and then it flew. One never knows where a target bird will appear. 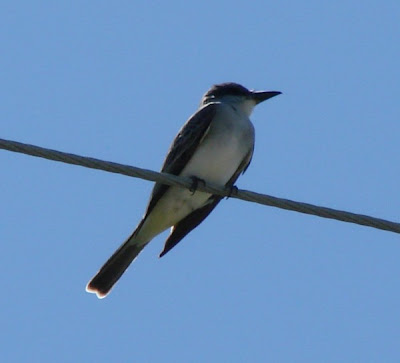 The Gray Kingbird is fairly common in the Florida Keys and proved to be the least challenging of our target birds. It looks like a bulked up Eastern Kingbird, a Barry Bonds on steroids. We weren’t even looking for it when we saw one perched on a power line. Leaving our hotel in Key West in the early morning, we heard its noisy chatter from high in a tree.

This brings me to the Black-whiskered Vireo. We went to the end of the road on No Name Key in the Key Deer National Wildlife Refuge. Key deer, small versions of the white-tailed deer, grazed on the road side. We explored the shoreline, watched diminutive Least Terns and robust Royal Terns resting. Along the road we located the White-eyed Vireo which was singing and then heard what we thought was another, but different vireo. In the car, we listened to the identical song on the track of the Black-whiskered Vireo. Then we began the quest for a glimpse.

The Black-whiskered Vireo is a close relative of our Red-eyed Vireo, and like our Red-eyed Vireo it often sings and forages in the thick foliage in the middle and top of trees. There are times when our vireo can be notoriously difficult to see. The Black-whiskered Vireo was just like our Red-eyed. We heard it here; we looked for some movement among the leaves. We saw no movement; we saw nothing fly. But now it sang from a tree to the left, and then a hundred yards down the road. It was in a tree right on the edge of the road; we saw a bird fly further from the road and sing like the vireo. 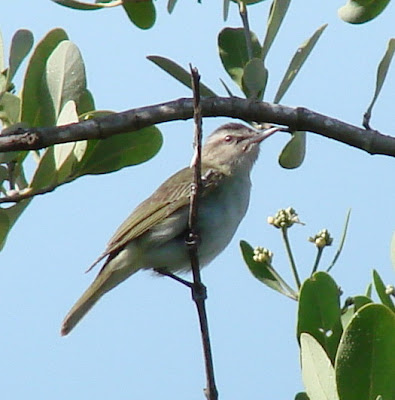 Two days later in the early morning we were on a different key looking (unsuccessfully) for the Mangrove Cuckoo. Prairie Warblers sang from prominent perches. A junglefowl ambled by to see if we had any crumbs to share. Black-and-White Warblers and White-eyed Vireos sang. So did a Black-whiskered Vireo. In between good looks at the other warblers and vireo, we searched for the elusive Black-whiskered Vireo - in this tree, and then that, down the road and up the road, and now back again in this tree. Pete Dunne calls the Black-whiskered Vireo a “canopy bugaboo,” and I have no argument with that.

But then ... typical of the vireos ... the Black-whiskered Vireo suddenly came out of hiding. They (more than one) paused on a branch, stayed still, sang and posed for us. They looked like washed out Red-eyes, but one perched on an open branch, lifted his head and sang for us, showing the thin, black whisker on his chin which gives him his name. For a long time (at least a couple of minutes) the vireos stayed in the open - probably a couple of males were disputing among themselves about whose tree they were in and who would win the affections of the lady. That is what spring is about, at least among the birds.

Of the target species, the Black-whiskered Vireo was the most satisfying. We found it without anyone’s help, first identifying it by its unfamiliar song. We had to work for a sighting, but when we finally achieved the sighting, it was not a “BLD” (better look desired). We saw the washed out color, the eye strip, the dark eye (not a red-eye) and the black-whisker. It was good birding.