Birds and Storms in Cape May 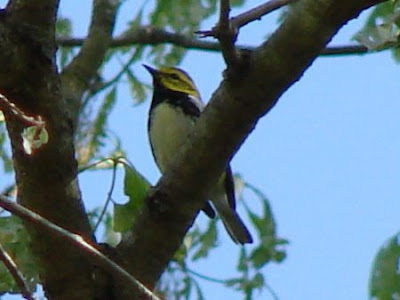 About two weeks ago I was in southern New Jersey, in Cape May, visiting some family. On that May Monday, a “November” nor’easter struck the Jersey coast: Heavy rain, 40 mile per hour winds that gusted to 70, warning of coastal tidal flooding. By mid-morning, schools were dismissing so busses could get children home before high tide. By mid-afternoon, tolls were lifted on bridges and roads so residents could evacuate the coast. It was foul! Give me a Vermont blizzard any time.

I made one brief excursion outside and noted, in passing, that the intracoastal salt marshes which lie between the barrier islands and the mainland, were completely flooded. I wondered how the marsh dwelling birds were faring. Severe weather often takes a toll on birds.

Tuesday was a glorious spring day and I was out birding early. I wondered whether I would see any signs of the unusually severe spring storm. Cape May is located on the north shore of a body of water that migrating songbirds cross during the night. Sometimes such a place has a “fall-out.” Birds fly north into a strong head-wind. They are so exhausted that as soon as they reach land they “fall out” of the sky and begin feeding to replenish their depleted fat reserves. Some birders relish such a fall-out when any tree might contain a dozen warblers frantically looking for food. I have often thought that such relishment is a bit perverse - that birders could take such joy in seeing birds in such extremity.

There was no fall-out on the day after the storm. The migrants that may have waited out the storm on the southern shore of the Delaware Bay, probably flew during the night. Although the winds were still brisk and from the north, they were not overwhelming. The migrants would have crossed the few miles of open water and then kept on going, touching down when daylight came somewhere in the pine forests of southern New Jersey. Then refueling, they would resume their journey to Vermont.

So I did not see a warbler fall-out as a result of the storm. There was the occasional down tree, the broken branches, lots of leaf litter, but no exhausted little songbirds nearly dead on the wing. Instead, the birds were back doing what they needed to do. They had hunkered down in some sheltered spot. Now they were singing! ... carrying nesting materials, chasing away another male or chasing after a female. And I had a grand time. 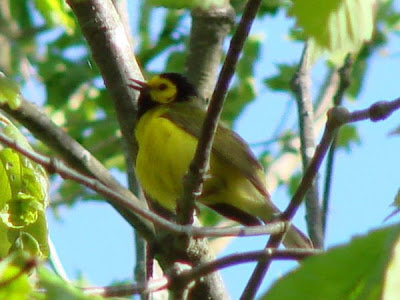 As a by the way: Cape May has a well-deserved reputation as one of the premier bird watching places in North America. It is a destination for serious birders from around the world. Every time I have birded in Cape May I have encountered people from beyond North America. On the other hand, as I have wandered the many wildlife management areas, I have almost always encountered someone who says in passing, “Boy, it’s slow today.” Go figure.

I saw most of the warblers that I would also expect to see in Vermont, but the real attraction of a spring trip to Cape May is to see the birds whose summer range does not normally extend as far north as our forests: flashy southern species like the brightly throated Yellow-throated Warbler - or the brilliant swamp dwelling Prothonotary Warbler with its orange-yellow head and breast - or the black-cowled, yellow bodied Hooded Warbler - or even the drab, sparrow-colored Worm-eating Warbler. 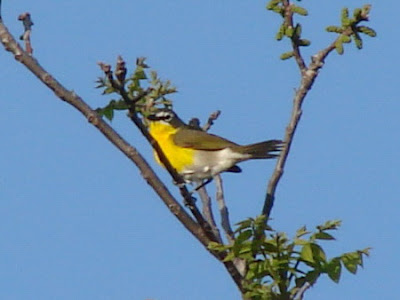 Probably my favorite southern warbler is the Yellow-breasted Chat. Except for its flashy yellow breast, the chat doesn’t look or sound anything like a warbler. It’s big - roughly tanager sized, with a large, un-warbler-like beak. It has big white spectacles on its eyes. It tends to hide in bushes and chatter away like a thrasher or catbird. Since it is spring, I saw it climb to the tree tops and sing, if you can somehow call its mockingbird, catbird like noise a song.

On the third day after the storm, we interrupted our trip home with a stop at the Brigantine unit of the Forsyth National Wildlife Refuge north of Atlantic City. With coastal marshes, fresh and saltwater impoundments, scrub, forest and field, it is one of my favorite birding places.

In early April, I spent half a day in the refuge, much of it watching a pair of Osprey going through their courtship rituals and remodeling their nest. On this trip, she was incubating; he was watching alertly from a nearby perch, ignoring her constant calling. 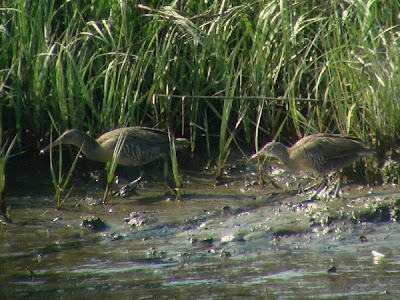 Along the edge of a muddy channel, a Clapper Rail emerged from the grasses. Often heard but seldom seen, this shy and elusive marsh hen was joined by a second bird, and we watched their courtship rituals until they slipped discretely back among the grasses.

On the far side of the eight mile refuge drive, we stopped to watch a young Great Black-backed Gull troubling with something in the shallow waters. Feathery and black with a long neck and long beak, we speculated that the gull was feeding on a cormorant. The black-backed is a big bird, and gulls are notorious nest robbers. But it seemed early for cormorants to be nesting, and this did not seem to be a small cormorant, like a hatchling, that the gull was dealing with. When I tried to approach for a closer look, the gull carried off his prize.

A short distance further on, a Herring Gull was trying to tear apart a similar carcass, and just beyond, another black-backed had yet another. All appeared to be cormorants. Ahead of me on the road, crows were working on a couple of dark objects. They flew as I approached on foot. The two carcasses were fresh, not yet picked clean, but with the choice viscera and meaty chest gone. Both were Clapper Rails. Nearby a pair of Turkey Vultures waited impatiently for me to return to the car. 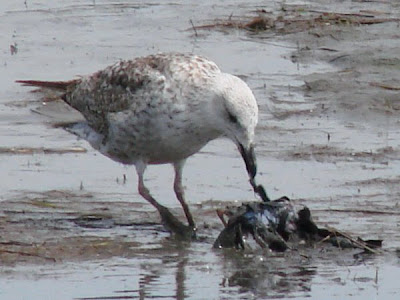 The scavengers were at work, cleaning up after the spring storm. It was a bonanza for them. We saw half a dozen carcasses in a short distance. How many more were scattered through the marsh grasses? We saw only the large birds. What was the silent toll on small songbirds?

We see the beauty of nature. We marvel at the grace of a heron in flight, the delicate plumes of an egret, the bubbly enthusiasm of a singing songbird, the brilliant color of a warbler, the antics of a nuthatch, the sweetness of a chickadee. We may marvel at the dash of an accipiter, providing it does not consume its prey - one of our feeder birds - within our line of sight. And when the rain and wind rage, or the temperature drops, we wrap ourselves in the protective cocoon of our home, beyond sight or thought of creatures which must endure. We seldom look on the other side of the rose glasses, and when we do, we do so quickly, ignoring the harsh and unlovely.

Life is not all sweetly singing songbirds and colorful warblers. There is a lesson in those scavengers picking apart the cormorants and rails killed by the storm. I am not exactly sure what the lesson is, but my gut tells me it is a lesson I should not ignore. Perhaps I should pass over the bird books above my desk, and turn for a time to a theologian or philosopher.

Email ThisBlogThis!Share to TwitterShare to FacebookShare to Pinterest
Posted by Chris Petrak at 8:00 AM
Labels: Cape May birding