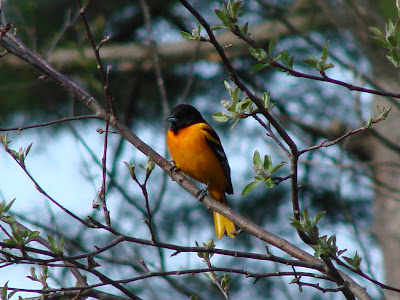 Remember the old nursery rhyme about four and twenty blackbirds baked in a pie? “When the pie was opened, the birds began to sing. Now wasn’t that a dainty dish to set before the king?”

You may very well wonder what the attraction of singing blackbirds would be. The blackbirds we hear around us are anything but accomplished singers. The squeaks, rattles, cronks, and crinks of the redwings, grackles, or cowbirds would be pleasing only to the most tone-deaf, or perverse, of monarchs.

However, the blackbirds of the rhyme are the (Common) Blackbirds of Europe. The Blackbird of Europe is a thrush, and like all thrushes, it has a rich repertoire that would be pleasing to the most discriminating of monarchs. So it is understandable why the blackbirds sang, undoubtedly in delight at somehow having survived being baked in a the pie.

When the English colonists settled on the shores of North America they saw many new birds. Many of these birds were somewhat similar to the birds they knew back home in England, so they gave the New World birds those Old World names. The blackbirds are one such example of superficially similar birds being named for an Old World bird.

New World blackbirds are, in fact, completely unrelated to the Old World Common Blackbird, or to any other Old World bird. New World blackbirds are in their own family and are found only in the Western Hemisphere. There are currently 103 species classified in the Icteridae family. Icteridae comes from a Greek word meaning “jaundiced,” or yellowish. (I have no idea why that name was applied to the family.)

I have developed a recent fascination with the blackbirds. You may very well wonder why. They are often noisy and aggressive. The male Red-winged may have flashy epaulets, but the species is so common that in many places it is considered a pest; even bird lovers often regard it as a “dirt” bird. The Brown-headed Cowbird is a brood parasite - regarded as lazy, voracious, and ugly; it is one of the birds that birders love to hate.

But ... not all blackbirds are completely black, and some in the blackbird family (Icteridae) are accomplished singers. Another instance of misnaming will quickly explain this. 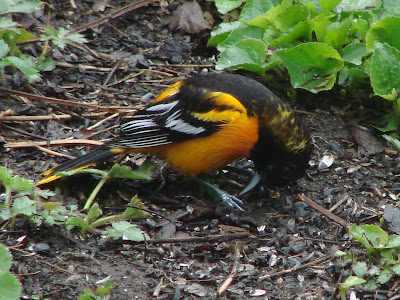 When the Catholic followers of the Lord Baltimore settled the colony of Maryland, they encountered a bird which was superficially similar to the Eurasian Golden Oriole (a member of the Oriole family - Oriolidae). The male sported the coat-of-arms colors of their patron - bright orange and black - and so they named the bird in his honor: Baltimore Oriole. (I believe these good Catholics were also responsible for naming a bright red bird the cardinal in honor of the church princes who also wore bright red robes.)

Most New World orioles are classified in the genus, Icterus, and typically sport yellow or orange plumage. The females are often paler yellow, jaundiced, as their genus name implies.

This year seems to be an especially good year for the Baltimore Oriole. In my neighbor’s fully blossomed apple tree, and in the cherry trees across the road, a spot of orange moves along a branch, pausing for a burst of song. “A thousand orchards are in bloom,” enthused Edward Forbush, “and among their tinted blossoms the resplendent Orioles with songs of joy weave in and out. Ever in New England this beautiful, elegantly formed bird is associated with blooming apple orchards, and with peach and cherry blossoms.”

At least two males are contending for territory and serenading their lady loves in my neighborhood. Adaptable to human presence, they may build their nests in shade trees and wooded residential areas, as well as open woodlands and orchards. I have seen a few Baltimore Oriole nests. The nest is a flimsy looking, hanging pouch, usually at the end of a branch. It is commonly 25-30 feet from the ground. The female builds the nest while the male sings nearby. She also incubates the four eggs (sometimes five or six), while the male sings nearby. The male finally gets into the parenting act when the young hatch; both parents feed the nestlings.

Year after year I have noticed that the Baltimore Orioles seem to vanish during July. Not a note is heard, nor a hint of their presence glimpsed. Then they reappear in August, the males again singing from high in the branches. During their disappearance, Baltimore Orioles undergo a complete moult. They are secretive and quiet. Then just as quickly as they have reappeared after the moult and resumed their song, they disappear again, off on their migration to Central and South America. 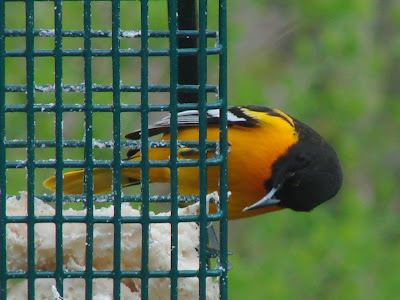 I have been especially excited about the Baltimore Orioles this year. In the past I have rarely had a really satisfying look at the orioles. Most times I managed only glimpses of the bright orange male as he moved through leafy branches or sang near the top of a tree. This year, however, the first male to return to the neighborhood came to the suet feeder. Then he was joined by a second male. Only a few feet outside my kitchen window, I watched them replenish their fat reserves from the suet basket.

This in turn prompted me to put out orange halves. I have tried attracting orioles with oranges in the past. The oranges eventually dried out and turned moldy, but the orioles never came close. This year the orioles came to the oranges immediately, and for over a week it seemed that I was replacing the picked apart orange on a daily basis. 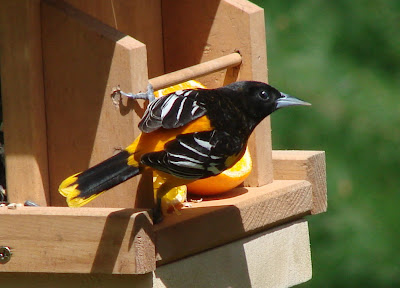 Now, however, this brightly colored blackbird is turning its attention to the business of breeding and nesting. There will be much to keep him occupied for the next month or so.

The blackbirds in the pie were thrushes, and thrushes are accomplished singers. But I daresay that the New World blackbird I am listening to outside of my window at this moment is also a very accomplished singer. He is handsome and brilliant in the bright colors that once adorned Lord Baltimore’s coat-of-arms.

Email ThisBlogThis!Share to TwitterShare to FacebookShare to Pinterest
Posted by Chris Petrak at 8:00 AM
Labels: Baltimore Oriole

hello, I have a regular black bird that is chasing away my orioles? any suggestions?