The Limitations of a Bird Guide 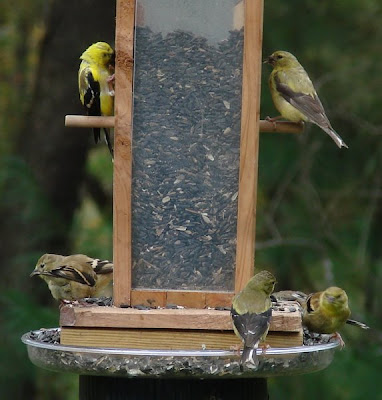 What I did not have among those goldfinches was a streaky brown bird with darkish wings containing a hint of yellow. I try to look carefully for this variation of the goldfinch, because it is not a goldfinch. It is a goldfinch cousin, the Pine Siskin.

I looked at the American Goldfinch in three bird guides. Sibley did not show a single example that looked exactly like any of the goldfinches at my feeders. The National Geographic guide was a little better, but not much. It had a couple of examples which were sort of similar to some of my goldfinches. Kaufman was the most helpful with three winter plumage examples which were close to some of the goldfinches I have been seeing.

The American Goldfinch is common. Even though there are many variations in plumage at this time of year, identifying the goldfinch should not be a problem. But those many variations and the lack of examples in the field guides points to an important principle. There is no infallible text. There are claims (open to dispute) from some religious quarters that the Bible is an infallible text containing all the right religious answers. By extension, some people seem to think that there should be infallible guides in non-religious spheres, such as birds. I do not often succumb to categorical statements, but here is one: There is no bible for bird identification. There is no perfect field guide. 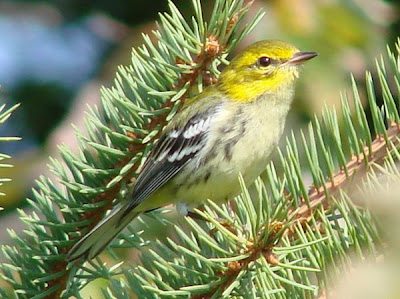 Let me give you an example. The Black-throated Green Warbler is a beautiful little summer bird with a brilliant yellow head, an olive back, dark wings with white wing bars, and a prominent black throat. I saw one recently on Putney Mountain. It stayed still long enough to allow me to get (if you will excuse the immodesty) a stunning photograph as it perched on a spruce branch. But, the bird I photographed does not look exactly like any photo or painting of any Black-throated Green Warbler in any field guide which I regularly consult. For one thing, there is only the barest hint of a black throat; that hint is noticeable only when I study my photograph of the bird and employ some imagination.

I finally found a reasonably close approximation of my Black-throated Green Warbler; it was in the 1983 edition of the Golden guide, the bird guide I used when I was learning birds. It was on the two pages of “Fall Warblers.” The old Peterson guide has similar pages called the “Confusing Fall Warblers.” The more recent field guides do not include side by side comparisons of fall warblers and often don’t even show fall plumage for a particular warbler. They should. 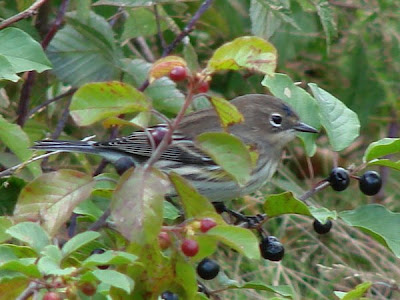 On another day on Putney Mountain, I managed a few photographs of a mostly little brown bird. It was a plain nondescript fall warbler, with just a trace of yellow along its flank. From time to time when it perched, or flew, it revealed its “butter butt” and so identified itself as a Yellow-rumped Warbler. The fall plumage of the Yellow-rumped Warbler is a stark contrast to the blue-gray bird with bold black and white and splashes of yellow that we see in the spring and summer. If the bird guide shows a fall Yellow-rump, it will show the yellow-rump, as it should. But as I have watched the Yellow-rumps on Putney Mountain, the yellow rump has often been hidden from view.

One more warbler. The nondescript fall Yellow-rump will usually (not always) give away its identity by flashing its yellow rump when it flies. For some other warblers, just a small detail of plumage betrays its fall identity. In a tangle of thick brush I grabbed a glimpse of a dull, olive bird with a tiny spot of white on the wing. The glimpse might have suggested a Common Yellowthroat or a Ruby-crowned Kinglet, although neither would have felt quite right. But the white wing spot was a field mark give-away for a Black-throated Blue Warbler. And just to make life simpler, a male still in breeding plumage popped briefly into view.

Often when we try to identify a bird using a field guide, we focus on the details in the guide. I remember many years ago when I was a novice birder, sitting in my backyard and studying the House Finches at the feeder. I pored over those little brown females and those washed-out red males, trying to make at least one into a different bird - a Purple Finch, perhaps. Every slight variation had me searching through the field guide open at my elbow. Very, very slowly I learned that the details of a bird in all bird guides are never exactly right.

Using a bird guide successfully requires imagination, letting go of the details, applying the impression of the photographs or paintings to the plumage impression of the bird you see. Sometimes field marks help, but other times size or shape or behavior are better clues. 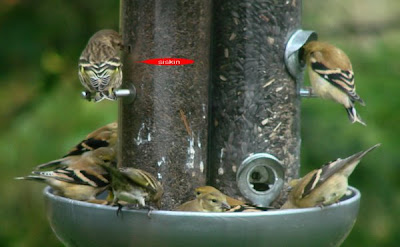 So ... You are watching the birds at your bird feeder. You notice that there are a lot of goldfinches. Except, they are all a little bit different. So you begin to wonder if they are all really goldfinches. And you start looking in your bird guide. But also ask yourself: are they the right size for goldfinches? Are they behaving like goldfinches?

Answer those question in the affirmative, and you can confidently conclude that they are goldfinches. But watch out for the streaked brown goldfinch that is really a cousin - the Pine Siskin.

I agree with you. Sometimes the use of Guidebooks provokes more confusion, specially for people like me, with few months of experience. I keep all my "unidentified" pictures in my portable computer, and I keep on looking at them and checking in Internet and other field guides, until I identify the bird.
I find your blog very interesting. Not only for the beautiful pictures, but also for the practical and useful comments you make.
http://carduelis-carduelis.blogspot.com/