When I lived in eastern Pennsylvania, I saw Evening Grosbeaks almost every year. Two or three times each winter, a flock of ten to fifteen grosbeaks appeared at the feeders. They gorged on my seeds, emptied the feeders, then hurried on to another yard with a full feeder. A few weeks later, they reappeared with the same results. 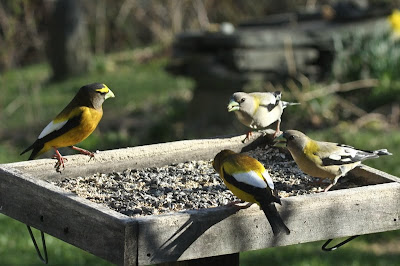 A couple of Evening Grosbeaks visited my South Newfane home during this past winter, but their visit was passing and brief. Then about three weeks ago a dozen birds appeared, coming and going to the feeders throughout the day, with much the same result that I experienced when I lived further south. But they did not move on. Most of them are here to stay for the summer. If the pattern of the last few summers continues this year, two to four pair will be nesting somewhere in the mature trees nearby. They will be feeding on my sunflower seeds, emptying the bulk feeders every few days. Young will be fed on the branches of the surrounding maple trees, and taught how to feed themselves on the platform feeder.

I have no complaint. Friends in Brattleboro consider themselves fortunate when they have one or two visits by the Evening Grosbeak during a year. To the south, their presence is hit or miss. They may irrupt during the winter ... or not.

The late nineteenth century ornithologist, Elliott Coues wrote a flowery description of the Evening Grosbeak: “ a bird of the most distinguished appearance, whose very name of the ‘Vesper-voiced’ suggests at once the far-away land of the dipping sun, and the tuneful romance which the wild bird throws around the dimming light of day; clothed in striking color-contrasts of black, white and gold, he seems to represent the allegory of diurnal transmutation; for his sable pinions close around the brightness of his vesture, as night encompasses the golden hues of sunset, while the clear white space enfolded in these tints foretells the dawn of the morrow.”

The florid prose is the result of the Evening Grosbeak having been discovered for science in the far Northwest, the land of the setting sun. In the 1830s when it was first studied, it was abundant in the Columbia River basin. At that time, it was almost exclusively a western bird. 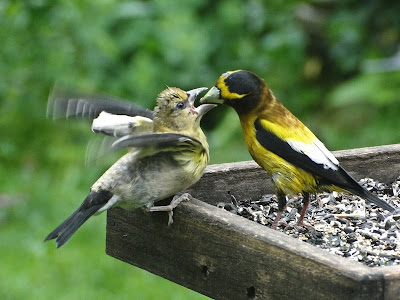 The Evening Grosbeak has been extending its range eastward since the late 1800s. A comprehensive study published in 1940 found the eastern range of the Evening Grosbeak distributed along the U.S.-Canadian border, mainly in the area of the Great Lakes, but with some suggestion that it may have been breeding in New England. The first confirmed breeding in Vermont was in Woodstock in 1926, the second record was 1953 in Londonderry. Since then, it has become increasingly regular during the summer breeding season.

The Evening Grosbeak’s scientific name used to Hesperiphona vespertina. The name derived from the Greek, referring to the Hesperides, “Daughters of the Night,” who dwelt on the western edge of the world, the place of the setting sun. Both parts of the scientific name, as well as the common name, suggest that this bird sings in the evening. As the light is fading away, the Evening Grosbeak acknowledges the vesper hour with his song. 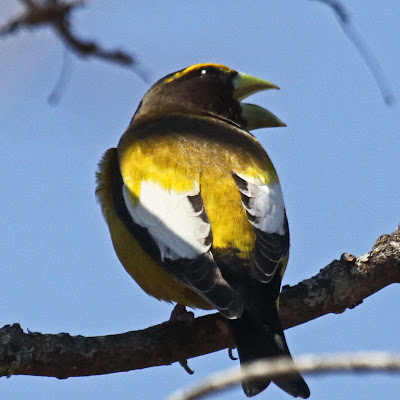 This sounds wonderful, even poetic, but it is wrong. The Evening Grosbeak will sing at any hour of the day, particularly during this season when pairing and mating is foremost in the hormonal dictated life cycle. I hear them singing in the trees when I go out for the paper at first light. They are singing in the top branches when I get the mail in the late morning. They are singing at lunch time, tea time, and supper time.

So, in spite of its name, the Evening Grosbeak will sing at any time of the day ... if you are willing to concede that the sound he is making is actually a song.

John James Audubon quotes another early naturalist’s description of the Evening Grosbeak’s song: “they are remarkably noisy during the whole of the day, from sunrise to sunset. They then retire quietly to their roosts in the summits of the tall pines .... Their ordinary voice, when they are engaged in procuring food, consists of a single rather screaming note, which from its tone I at first supposed to be one of alarm, but soon discovered my error. At other times, particularly about mid-day, the male sometimes selects a lofty pine branch, and there attempts a song; but it is a miserable failure, and he seems conscious of it, for he frequently pauses and looks discontented, then remains silent sometimes for some minutes, and tries it again, but with no better success ... The song, if it may be so called, is to me a most wearisome one: I am constantly listening to hear the stave continued, and am as constantly disappointed.”

I cannot argue with this critical appraisal of the Evening Grosbeak’s song. It does not amount to much. 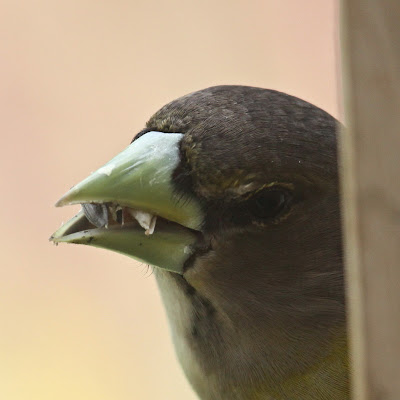 The common name, “grosbeak,” refers to its large beak, from the French for “big.” While eating breakfast, I watched a female on the feeder hanging by the kitchen window; deftly she opened one sunflower seed after another with her big (“grosse”) beak.

The Evening Grosbeak is now in the Genus, Coccothrautes, meaning “shatter kernels.” The Genus also includes the European Hawfinch (which sometimes strays to western Alaska) and the Central American Hooded Grosbeak. The wide distribution of the three Coccothrautes species raises intriguing questions about how three close relatives became so geographically separated, and why, given the separation, there are only three close relatives. It’s a mystery to me, and probably to science as well.

The Evening Grosbeak is a strikingly handsome bird, and I am delighted that they spend the spring and summer with me - all the more so since research suggests that the population is in serious decline. The decline may be over 75% in the last 40 years. Based on data from Project Feeder Watch, they are completely missing from many areas where they were
common as recently as the early 1990s. 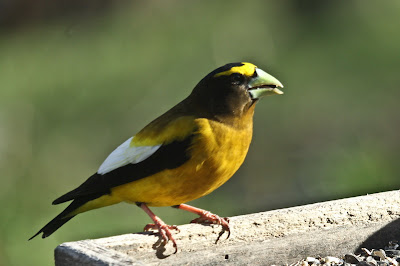 The cause of the Evening Grosbeak’s decline is unknown. One possibility is that they are not moving as far south during the winter due to warmer winter temperatures. The decline might also be related to food availability. Hardwood tree seeds, a favorite natural source of food of Evening Grosbeaks, may be less common due to in forestry practices in Canada. Finally, Evening Grosbeak numbers in the East may simply be stabilizing after their colonization of the north woods east of the Great Lakes.

Gotta go replenish the sunflower feeders and put them out for the day - Good Birding!

Email ThisBlogThis!Share to TwitterShare to FacebookShare to Pinterest
Posted by Chris Petrak at 6:00 AM
Labels: Evening Grosbeak

I love these birds, they are so pretty. Great shots and lucky you to have them visit

A lovely and informative post, with great pictures. The birds have an amazing color pattern; they look like they're glowing. I've never seen an Evening Grosbeak; your writing makes me want to see one even more!

Interesting post! I had look up Hawfinch in my Birds of Europe book but don't remember seeing it when I grew up in northern Germany. I had a EG pair visit my feeder here in Brattleboro only once. When living in a townhouse near a wooded area in Springfield, Mass, I had a big flock of EG's visit my feeder on my balcony. What a spectacle - and noise. I didn't realize then how unusual it was.

My husband and I are at a campground in Falcon, CO. This morning we were surprised to see several (males and females) Evening Grosbeaks at our feeders. Our first time to see this beautiful bird!

I live in Merritt, British Columbia, Canada and I look forward to their visits every spring. They are hearty feeders and quite aggressive towards one another. Was able to take some fantastic pics today while they were feeding, almost landed onmy iPad. The only problem is they like to bang into our windows once in awhile. None have died yet, must've due to the tough beaks, lol. Beautiful birds though.

I live on the west coast of Newfoundland and have, since 1999, seen 2 or 3 brief sightings of the evening grosbeak at our feeder until this summer when a pair arrived, and stayed to breed. Each day for the past couple of weeks, I have been enjoying their visits to the feeder with their young one. It's such a pleasure to have them here!