The Sexiest Time of the Year 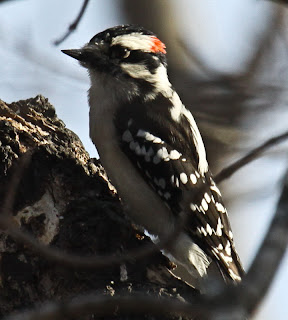 Throughout the winter months, I had four Downy Woodpeckers which visited my suet feeder every day: two males and two females. I assumed they were from the two pairs which had nested in the neighborhood last summer. One pair nested somewhere upstream, the other somewhere downstream. When they fledged young, the parents came to the feeders, chased by the fledglings. The young were fed, and eventually learned to feed themselves. Each pair of Downy Woodpeckers raised two broods. They were busy parents.

I don’t know if Downy Woodpeckers maintain a pair bond through the winter. Probably not, since mortality is high among small birds, and survival of oneself is more important than a mate. Sometimes during the cold months I would see two males, or two females, or a mixture of three birds, and sometimes all four. It was foraging behavior I observed; if there was any pair bond which remained, it was incidental. 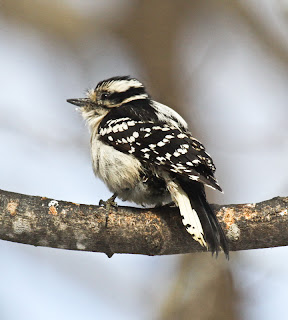 Whatever the winter relationships may have been, they are different now. A few days ago I watched three of these small woodpeckers making a racket in the trees behind my home. On one occasion I clearly saw two males and one female. (The male has a red spot on the back of his head; the female does not.) The males were chasing the female, while simultaneously trying to chase off the other male. It was noisy and chaotic.

Now on to another of my common backyard birds, the Black-capped Chickadee. I never figured out the numbers or dynamics of the wintering chickadees. They moved through the feeders in loose flocks, but feeding as individuals. They are still feeding as individuals, but there are new dynamics at work. Last weekend I watched a half dozen or more chickadees as they hurried through the tree branches and bushes, made quick trips to the bird feeder, and pounded open the sunflower seeds for the tasty meat inside. As one of these tiny birds sated its appetite, it flew off, but not alone. A second chickadee flew after the first, followed by a third. They all swirled as a fourth joined the chase, and then a fifth. The boys were in hot pursuit of the girls. 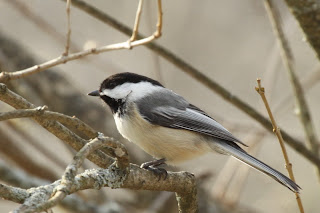 When not chasing one of the girls, or one another, the chickadee boys are boasting their prowess. “Feee-beee” or “peee-weee” go back and forth from the trees as the male chickadees sing their genetic virtues.

All the birds are doing it.

Blackbirds for example: until the orioles (which are blackbirds - Icterids) finally arrive, there is nothing musical in blackbird songs, but the blackbirds sing anyway, stretch and strut, spreading tails and wings, all in an effort to impress the females.

The phoebe is doing it, with his maddeningly monotonous “song” which he repeats from dawn to dusk, with a wag of his tail accompanying each so-called song. “Phoe - bee” (tail wag) ... “phoe  - Bee” (tail wag).

Older generations of writers called it the family season, or if they were being bold, the love season. They said it was the time for domestic duties, for solicitousness to one’s mate, followed by parental devotion to one’s offspring. 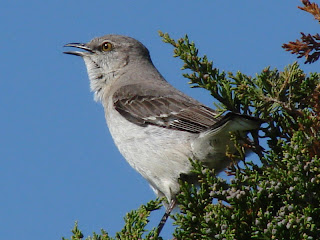 Today we are less circumspect. What is going on is about sex. Getting it and getting as much as possible. Many  birds form a social bond during the breeding season. They pair monogamously to nest build and raise young. DNA studies are showing that social monogamy is different from sexual monogamy. Few birds are sexually  “faithful” to the mate. The eggs in the nest of a chickadee pair may have been fertilized by the male of the pair, or not. One or more other males may have had a fling with the female. The eggs may not have come from the female of the pair. Another female may have dropped an egg in her nest. Cowbirds consistently parasitize nests with their eggs. But sometimes even a chickadee female will drop one of her eggs in someone else’s nest. Perhaps she gets confused in the heat of the moment. 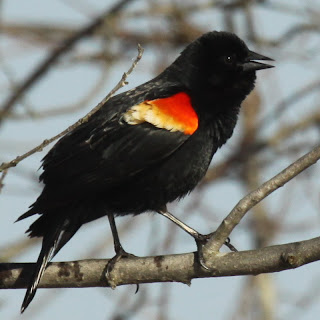 There are a lot species that don’t even make a pretense of forming any kind of a pair bond. The Red-winged Blackbird gathers as many females into his harem as he can, but I am sure the females sneak through the marshy reeds gathering as much genetic diversity for their young as they can. The Wild Turkey tom gathers a harem for a brief time, then the hens head off to incubate and raise the young without any further assistance from the strutting tom.

As Bob Engel explains in his article in the April newsletter of Southeastern Audubon, it is all triggered by sunlight. As the days start to get longer, physical changes are switched on. As the number of daylight hours increase, the internal evolutionary manual carried by the birds tells them they will likely survive winter and now it is time to insure the survival of the genes. In the male bird, his testes swell. Testosterone is released. He begins to sing. More testosterone is released. He becomes aggressive, defends his territory, and pursues females.

Physiological changes are also triggered in the female, because as the days continue to lengthen, she welcomes the pursuit. In many species, she selects a social mate who demonstrates good foraging ability and domestic skills to help with the young. She also gathers DNA for her young from as many sources as she can.

It is wild and raucous ... and all of the birds in our neighborhoods are doing it. More will be arriving soon to join the festivities. 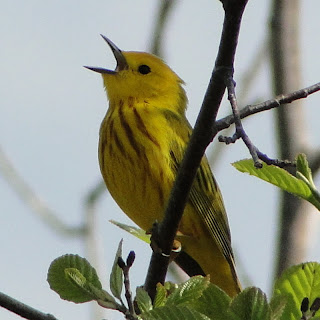 It is as though the whole bird population has roared into puberty at the same time. Their hormones are raging. Can you imagine what downtown Brattleboro would be like if every, single person you saw was on the make. Not just some, but every one - the entire population - looking for assignations? The entire population strung out on new hormones? That is what is happening with our birds. It happens every year.

Great post and photos of the birds, Chris! The downies are one of my favorite yardbirds. Love your Yellow Warbler.

I can picture the displaying and calling as the residents of Brattleboro engage in thier annual spring ritual of trying to attract a mate. LOL

The busiest season for the birds and who knows who else! FAB

I hear that Yellow Warbler all the way in NJ! You are right; this is a great time (if difficult) for birds and birders!

Chris, you have a great window seat on the mating competion. I am wondering about the genetic advantage of a male tending to the offspring of an unrelated male. This type of altruistic action seems counter to nature -- unless it contributes to the survival of the species as a whole.

WONDERFUL Photography and the little yellow singing sweet bird is just an incredibly beautiful shot.....!!!!!!!
FASCINATING...the world of birds and you bring this world very alive with your interesting documentation and colourful photos!!!!!!!
ciao ciao elvira