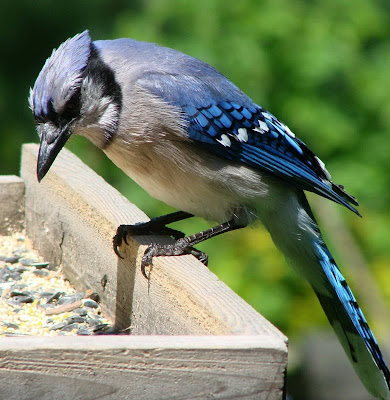 Does familiarity breed contempt? I hope not.

I spend quite a bit of time watching birds at bird feeders. I watch the feeders in the morning when I have a cup of coffee. I watch them during lunch while also reading the day’s mail. I watch them through the kitchen window when I am preparing a meal, or just passing by. On a sultry summer morning or afternoon, I sit on the porch and watch the birds come to and fro at the feeders.

Occasionally an unusual bird pauses on the feeders, but most of the birds are familiar. Some are around all year. Some pass through during spring and fall migration. Some visit during the summer when raising their families. Some of the individual resident birds have been around for several years - or at least, I think so. I would love to be able to band or tag them so I could identify the individuals. They know my schedule, such as when I put out the seed in the morning. They know the suet feeder will only be absent for a few minutes when I take it inside to refill. They know to wait, though not always patiently, when I have yard work to do.

I started asking myself the question after I spent a week at Asa Wright Nature Centre on Trinidad. A lot of that time was spent watching the Centre’s bird feeders from the veranda. The birds were all new to me. Many of those birds were unrelated to any of the birds I might see in New England, much less around my feeders. And many were just drop-dead gorgeous! After a week, I was still saying, “Wow!” even to some common, ever-present birds. 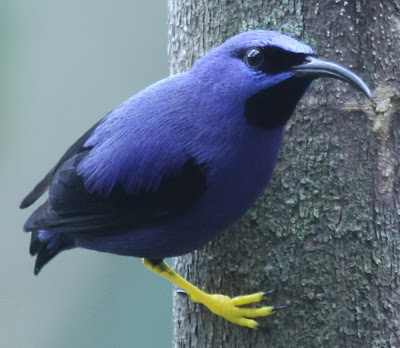 I’ll give you two examples: the Purple Honeycreeper and the Green Honeycreeper. These are small tropical birds related to the tanagers. Like hummingbirds, they specialize in feeding on nectar.

The Purple Honeycreeper was a common visitor to the hummingbird feeders and the flowers around the veranda. The male has a deep blue body - a deeper blue than our Indigo Bunting and a richer blue that our Black-throated Blue Warbler. (In spite of its name, I could not really see the Purple Honeycreeper’s color as purple.) Black wings contrast with the deep blue body. It has a bright red eye, and a long decurved bill.  The male’s companion is green, with a white breast streaked with green & blue; she has a rusty orange chin, and a thin purple malar (a line running from the base of the beak down what we would call the jaw and neck). She is a contrast to him, but to my aesthetic, every bit as gorgeous. 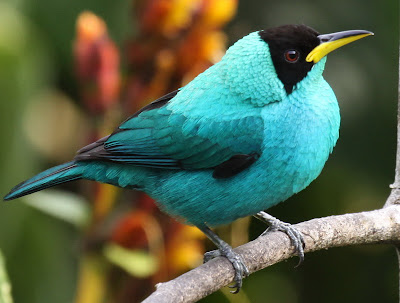 The Green Honeycreeper is somewhat larger than the Purple Honeycreeper and has a stout bill. The male is a rich turquoise green, with a complete black hood and red eyes. His turquoise jade color does not look quite real – too bright, too turquoise, too much jade color, too ... something. Wow! His companion is a bright apple green, unlike the green of any bird in our Northeastern forests. For example, our Black-throated Green Warbler is a greenish tinted olive bird when compared with the green of the female Green Honeycreeper. 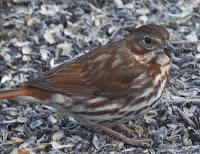 But now I’m back home with just my familiar old birds. Just ...?

One of my first mornings back home, I saw a chunky, foxy-red sparrow hop out from the brush and scratch at the ground. Excitedly I called my favorite companion to see our first Fox Sparrow of the year. 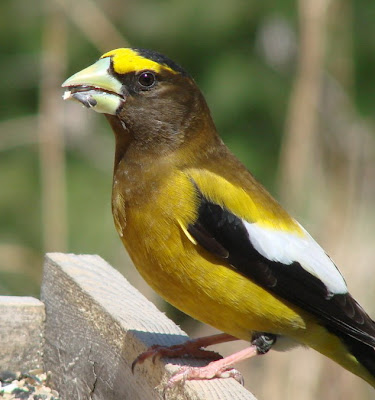 Then the Evening Grosbeaks began to arrive, fizzing their non-song in the trees around our home and sweeping down on the sunflower feeders. I know people who would love to see just one Evening Grosbeak; last weekend I counted fourteen on the ground and at the feeders. The males are beginning to display. Eventually, a couple of pairs will nest in the woods nearby and feed their young at the feeders. And there is something I have to tell you about the male Evening Grosbeak - he is drop-dead gorgeous! He is big, like an NFL linebacker. His basic body color is a deep yellow. He has a bright white patch on each black wing, and a dark brown head  with a bright golden eyebrow. Wow!

I am fortunate to have the Rose-breasted Grosbeak as a summer visitor and neighborhood nester ... and Baltimore Orioles singing in the trees and coming around for a fruit or suet snack ... and passing Indigo Buntings ... and wine red Purple Finches ... and a male Ruby-throated Hummingbird who will patrol the grounds with proprietary fervor.

But these are all summer season birds, and I must not overlook the familiar birds that are so often take for granted. A number of years ago I had visitors from California, and other visitors from Britain. Their jaws dropped in awe when they saw one of my regulars for the first time. From the other side of the continent and the other side of the ocean, these visitors mumbled something like, “That is so beautiful ... you are so lucky!”

In a moment of restraint, I did not say, “Oh, that’s just a Blue Jay.” Oh yes, the Blue Jay is brash and flashy, but he is also drop-dead gorgeous ... unless our familiarity with this bundled energy has made us take him for granted ... or worse, has bred contempt. 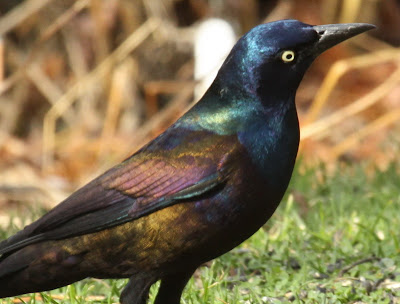 The sun sparkles through flowering trees, brightens the greening grass, and turns even plain birds brilliant with iridescence. I have been admiring the rainbow of colors on the grackles, and the bright red epaulets when the Red-winged Blackbird displays. I am watching as the olive-drab goldfinches change into their bright yellow summer attire. I am listening to the “peer ... peer” of the titmouse, the musical “feee - beee” of the chickadee, the clipped “Phoe-be” of the phoebe, the warble of the robin, and the drumming and chatter from six woodpecker species.

For me, Spring, with its rushing impulse for life, banishes the taken-for-grantedness that comes with familiarity. Excitement and vibrance are in the air. Enjoy it!

Great post! You know, often I hear people when I am birding say, oh... it's just a Cardinal or it's just a Blue Jay! In my head I am thinking, What! Just a Blue Jay, this is a gorgeous bird with tons of personality, it is not "just". But, like you, I remember last year in Ecuador where I could not stop looking at the feeders... all new! Nonetheless, sounds like you have a some great guests at your feeder! Wow, an Evening Grosbeak!

HI Chris,
What a fantastic post... yeh I kind of understand your feelings... Sometime we just do not realize the chance we have to see the birds we see... Especially after a great trip like the one you did.. And maybe also because our birds seem to be so familiar... But heye, you are getting ncie pictures of your familiar bird like the grosbeak... and time to time a little bit of something different is good... That's why we go on birding trip ;-)

What a thoughtful post! You are so right -- we often take for granted some of these wonderful creatures that are right in our own backyard. The next time I see a Blue Jay, robin or chickadee in my yard, I will think of your words.

This was a fantastic post. I never take advantage of any of the backyard regulars, I believe they are the one who attract the new oddballs. They make me smile and sometimes even laugh at their antics and I would be lost without them. :)

I really enjoyed that post. The photography is fantastic and your writing makes for a great read. I have started appreciating my local birds more and more, but I still love the adventure of going to a new place to see their local birds.

I also hope that watching bird feeders does not become old. I love sitting in my blind by my feeders - by the hour - watching the show. Violence,sex, humor - it is all there and it beats TV.

In three outings to the sage grouse lek, I have already taken over 400 pictures. I don't have the perfect shot yet.

I guess it would be quite a bird culture shock after leaving Trinidad, but I love our everyday birds and never grow tired of them. When I'm home, I watch and listen for them all day at the feeders too... I enjoyed this post (as always!)

I do the same in the morning, are these pictures that you have taken? They are great.