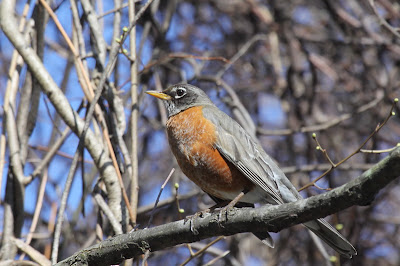 Everyone knows the robin. With its orange-red breast, it hops across the grass, pauses, listens, then pulls an earthworm from the ground and flies to its nest. The robin’s nest might be anywhere. In the bush outside your bedroom window. In the plant hanger on your front porch. On a high branch in the big old maple tree next to the road. On the beam in your car port or garden shed.

When I visit my children in Philadelphia, the robin sings on the top of old industrial buildings, forages the manicured flower beds around apartment buildings, and picks grit for its gizzard from busy streets just ahead of the rumbling urban buses.

I have just returned from a two week trip to western Nebraska, western South Dakota, and Wyoming. At a ranch in the mixed grass prairie of Nebraska’s sandhills, I watched Killdeer do their broken wing act to lead me away from their nest. Barn and Cliff Swallows swirled in the air, Western Kingbirds chased off blackbirds, Meadowlarks sang on fence posts, and robins carried food to their nestlings. 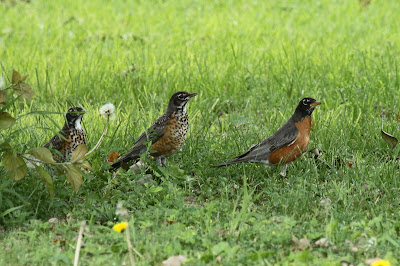 Outside of my cabin in the hot dry prairie of the South Dakota badlands, speckle-breasted fledgling robins hopped after their parent, begging for food.

At a 9500 foot pass in the Big Horn Mountains, Mountain Bluebirds and White-crowned Sparrows sang in a bird choir featuring the robin.

At Mammoth Hot Springs in Yellowstone National Park, a robin paused on a travertine terrace, then foraged along a watery edge where steam rose. On the barren and eerie landscape of the Norris Geyser Basin, a robin found a tiny, green remnant from which it collected grass to line its nest.

In the monoculture of Wyoming’s lodgepole pine forests, there was very little bird diversity, but there were always robins.

The American Robin is everywhere: from the high tundra in the north, to the deserts in the West and swamps in the South, from the urban, suburban, and small town landscapes to the rugged and forbidding mountains.

It is like the automobile; you expect to see it wherever you go. It is so much a part of the background landscape that you barely notice it. Except that the automobile can’t go everywhere. The robin, unencumbered by the need for roads, can - and does.

The natural habitat for the American Robin is the great primeval forests. Those forests have almost completely disappeared. The robin remains, having accommodated itself to the changes we have made to the landscape. When trees were planted around homes on the great grassland prairies, the robins moved in. But if there are no trees, then a bush will do - or a stone wall, a building, a fence, or even the ground. 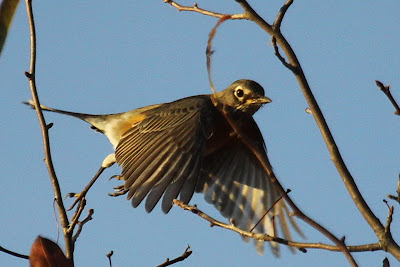 The scientific name for the American Robin is Turdus migratorius. I’ll have more on the name in the future. “Migratorius” is from Latin and gives our language the familiar “migratory;” it means wanderer. The robin wanders everywhere in North America. With the exception of the deserts in the Southwest, the Rio Grande valley, and Florida, it breeds where it wanders.

The wandering characteristic of the robin continually mixes up its gene pool resulting in a remarkable uniformity. Many songbird species, even those with a more limited distribution than the robin, have recognizable subspecies; geographical separation and habitat differences encourage change and adaptations.

With the robin, there are a few differences, but those differences are seen only in the most widely separated populations. Sibley’s Guide describes far western populations as, on average, paler and drabber; the white corners on the tail are nearly lacking. On the other side of the continent, Atlantic Canada robins are more richly colored with extensive black on the nape and mantle. Robins from Atlantic Canada are most likely to be seen in our area during the winter months. However, the robin is so common that most of us will only register “robin” without looking for possible differences. For that matter, the differences are so gradient that even the most experienced birders will disagree, assuming they have paused on a robin long enough to note any differences.

During our Spring and Summer weeks, nearly every place you go in North America you will hear the song of the robin. It is a cheerful warble of ascending and descending phrases; “kill’em, cure’em, give’em physic” is one way that the meter and rhythm has been rendered. “Later, in the season of summer showers, the most copious ‘rain song’ is given. Now and then a Robin appears to imitate some other sound beside his own. Thus, one may render the song of the Blue-headed Vireo, another whistles like a boy calling a dog, but in most cases the Robin adheres closely to his own characteristic but somewhat varied repertoire.” (Forbush) 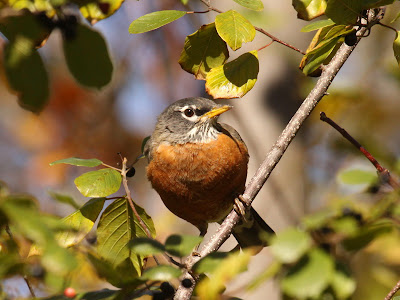 As John James Audubon wandered the North American continent during the first third of the 19th century, his travels brought him to Labrador: “The first land-bird seen by me, when I stepped upon the rugged shores of Labrador, was the Robin, and its joyful notes were the first that saluted my ear. Large patches of unmelted snow still dappled the surface of that wild country; and although vegetation was partially renewed, the chillness of the air was so peculiarly penetrating, that it brought to mind a fearful anxiety for the future. The absence of trees ... the barren aspect of all around, the somber mantle of the mountainous distance that hung along the horizon, excited the most melancholy feelings; and I could scarcely refrain from shedding tears when I heard the song of the  Robin.”

Email ThisBlogThis!Share to TwitterShare to FacebookShare to Pinterest
Posted by Chris Petrak at 6:00 AM
Labels: American Robin