The Uncertain Future of the Red Knot

The Red Knot is a plump, medium sized sandpiper usually seen along our Atlantic coast during Spring and Fall migration. John James Audubon, in The Birds of America, began his description this way:

“The Knot, good reader, is a handsome and interesting species, whether in its spring or in its winter plumage, and provided it be young and fat, is always welcome to the palate of the connoisseur in dainties. As to its habits, however, during the breeding season, I am sorry to inform you that I know nothing at all, for in Labrador, whither I went to examine them, I did not find a single individual.”

We should not criticize Audubon for his failure to learn of the Red Knot’s nesting habits. The nest went undiscovered to science until June, 1909, when Admiral Peary photographed one in the high arctic after his dash to the North Pole.

Nor should we be too critical of Audubon for commenting on the Knot’s tastiness. He was a man of his time, and even scientists studied wildlife for their “usefulness” to society - in the Knot’s case, as a dainty delicacy. Its flavorfulness may even explain its name. One account of the name origin has the Danish King Canute, or Knut, dining on a strange coastal bird. His compliments to his chef led his courtiers to dub the bird, Knuts, or Knots.

An alternative account of the origin of the Red Knot’s name also features King Canute. This one notes that the Knot often feeds in the water, even as the tide is coming in. Where the Sanderling chases the waves, running to and fro with the coming and going of the tide, the Knot seems to hold its ground, as though trying to hold back the tide itself. A legend associated with King Canute has the Danish monarch attempting to hold back the tide, futilely we can be sure. Hence the association of the Knot (Calidris canutus)  and Knut.

The Red Knot is a circumpolar nester. The North American subspecies (one of two subspecies) was once the most abundant sandpiper to be seen along the coast. Forbush reports that in spring and autumn “their hosts were marshaled on the flats of Barnstable County, and around Tuckernuck and Muskeget islands they collected in immense numbers and rose in ‘clouds’ before the sportsman’s gun.”

And, that was the first challenge faced by the Red Knot to its survival as a species - a combination of its habit to gather always in large flocks of its own kind, and the advent of modern killing technology. However, it was not the sports hunters which nearly did in the species, but the market hunters of the late nineteenth century. These exploiters employed technology and organization to “harvest” as many birds as possible and “reap” the profits. The numbers of Knots fell precipitously. The species was in danger of joining the Carolina Parakeet and the Passenger Pigeon on the list of extinct birds.

It was saved by the Federal Migratory Bird Law which went into effect in 1913. The hunting season was closed on nearly all shorebirds, and just in time for the Red Knot. In the following decades, the Red Knot recovered to some degree. Hunting still poses a danger on some of its South American wintering grounds and along migration routes in South America. But the most serious danger to the Red Knot lies in the Delaware Bay. 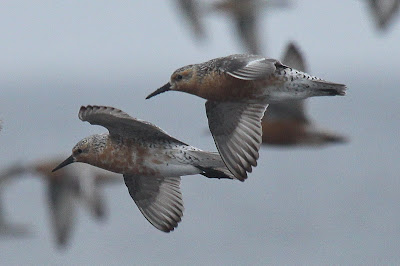 While a few Red Knots winter along the Atlantic coast, most winter in southern Argentina and Chile. Every year, they travel 9 to10 thousand miles to Arctic Canada to nest. On the first stage of their northward journey, they travel 3 to 4 thousand miles (usually non-stop) to the shores of the Delaware Bay. Their flight is timed so that they arrive at the Delaware Bay when the Horseshoe Crabs are crawling ashore to lay their eggs. Having burned their fat reserves, the Knots feed almost exclusively on the crab eggs.

The number of Red Knots stopping at the Delaware Day has been as high as 150,000 birds. However, by the early years of this century, the number had suddenly dropped to around 15,000 birds, a 90% decline. Surveys in South America also showed a precipitous decline. What happened? 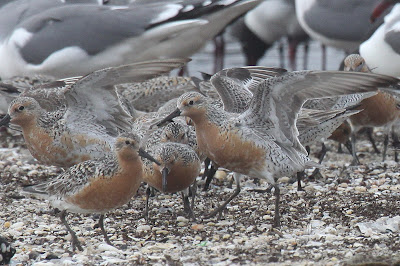 Beginning in the 1990s, commercial fishermen began harvesting Horseshoe Crabs for use as bait in eel pots. The eels, like the shorebirds, love the eggs. The preferred time to harvest the crabs is in the spring when the females are filled with thousands of eggs. Hand harvesters work just off shore as the crabs are coming ashore and take only the females. In the 1980s, researchers normally found 100,000 eggs per square meter in the top five centimeters of soil. Now they are finding 1,000 to 5,000 eggs per square meter.

In 1982, aerial survey flights saw the beaches lined with crabs four deep (that’s vertical depth!) and miles across, and estimated the shorebird peak during the third week of May at one million birds. The survey task is much less daunting today. “Along the New Jersey coast, the ribbon of life had been abraded to frayed and broken strands. The numbers of crabs and birds reduced to a vestige,” wrote Pete Dunne just a few years ago. 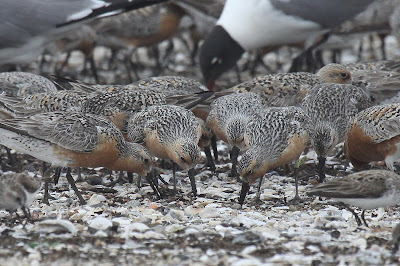 The consequence for the shorebirds is that there is simply not enough food for them to regain their fat reserves for the next stage of their migration. This has been especially dire for the Red Knot, but at least five other species of shorebirds also feed heavily, if not exclusively, on the Horseshoe Crab eggs during their spring migration. All have experienced sharp population declines. For example, prior to 1988, as many as 272,000 Semipalmated Sandpipers were counted in one day along the Delaware and New Jersey shores of the Delaware Bay. After 1988, no day count has exceeded 100,000.

Conservation organizations, such as Audubon, have succeeded in convincing New Jersey and Delaware to impose limits on the harvesting of crabs along their coastlines. With abundant evidence of an ecosystem disaster in the Delaware Bay - or at least a species disaster for the Red Knot (impending extinction is rather serious disaster for a species) - one would think that the Endangered Species Act would come into play, and that the federal government would employ its considerable power to provide protection. In response to petitions, the U.S. Department of Interior said it would “fast-track”  the possibility of listing the endangered Red Knot as a “threatened” species (not endangered.) “Fast-tracking” apparently means it will take years, instead of years and years to have a decision. 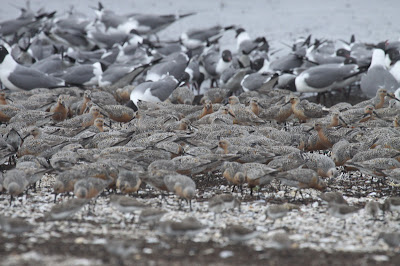 In 2006 the State of New Jersey acted when the federal government did not. The state banned the harvesting of horseshoe crabs in its waters. In 2008, the Red Knot count was 15,000. In 2010, it was 24,000. Perhaps this is a sign that the crab population, and the bird population are beginning to recover. Researchers are far from breathing a sigh of relief. Keep your fingers crossed.

Canute’s sandpiper, the red-breasted sandpiper, the beach robin - C. canutus rufa, - officially the Red Knot - may not have a couple of years. Its epic migrations are in danger of becoming mere memories, tales to be read about, but never to be witnessed.

Email ThisBlogThis!Share to TwitterShare to FacebookShare to Pinterest
Posted by Chris Petrak at 6:00 AM
Labels: Red Knot

Great post, Chris. I loved the photos, I would hate to see anything happen to these beautiful birds. I was thrilled to see thousands of them one year In Mispilion, Delaware.

Hi Chris - you or your readers may be interested in an effort to aid the diminished food supply the birds encounter during their stopover in the Delaware Bay area (The Red Knot Survival Project):