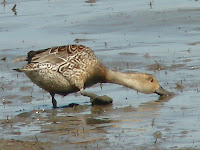 #2 - Green Winged Teal - female. When she is by herself, her small size may be hard to judge. A characteristic often sited is a steep forehead, but that is not so apparent in this photo. The green speculum which gives this species its name is visible in this photo, but it is hidden as often as it is visible and is not a dependable field mark. Short dark beak, gray legs, indistinct eye line, and a sort-of brown-gray head.

#5 - Northern Shoveler, female. In beak size, this is the daffy duck of the duck world. It's not all nose, but if it were, Jimmy Durante and Cyrano deBergerac would eat their hearts out. In spite of the size, the large beak is not always apparent at a distance, although it does give a profile that is different from other dabblers. Orange legs, orange beak with black on top, brown head (no eye stripe).

Often the females can be readily identified by the company they keep - namely, that of a male companion. The problem comes in pulling your attention away from her dashing companion to study her, which is why it can take so long to learn the females. Remember that her drab appearance camouflage's her when she is on the nest and protecting her young.

Dabbler #1, the Northern Pintail female was cropped out of the next photo. I suspect that the eye of the typical viewer will be drawn to her handsome mate nearby, and except for her rather unusual stance in the photo, she will go unnoticed. That's the point ...