Delighting in the Common Goldfinch 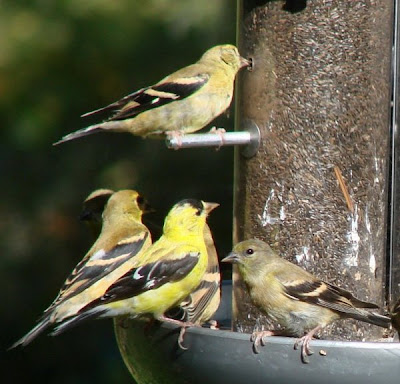 I once birded with someone (not a local) who was very disparaging toward the American Goldfinch. It was early winter, and there was not much variety in the birds to be seen. Everywhere we went, however, we seemed to see goldfinches in their olive-drab winter plumage. “They’re so common,” he complained, “and so ho-hum. Wish we could find some good birds.”

I recall this exchange several times every year as I encounter the goldfinch. Each time I dismiss the opinion more quickly as simply the opinion of a birding snob. Yes, the goldfinch is a common bird. But it is also a bird which delights the eye and ear during every season of the year.

Thirty years ago, when I was just beginning my bird watching hobby, I was walking through an abandoned orchard in late August looking for migrating song birds. This was a time when I still needed to see a bird, track it, study it carefully through my binoculars, and thumb my bird guide in order to make an identification. The passing years have erased many of the details and sequence of events which led me to discover a dainty nest in one of the old apple trees - a nest being attended to by a pair of goldfinches, and filled with the gaping mouths of hatchlings.

At a time when nearly all other species have completed their nesting, the goldfinches finally get down to their business. In the last week I have watched a young cardinal come to the feeder; its parents have left it on its own. Robins are finishing with their second set of young. House wrens will either fledge their second brood in a few days, or will abandon them in order to head south. The immature red-tailed hawk is still calling for its parents, but it is going to be on its own very soon. 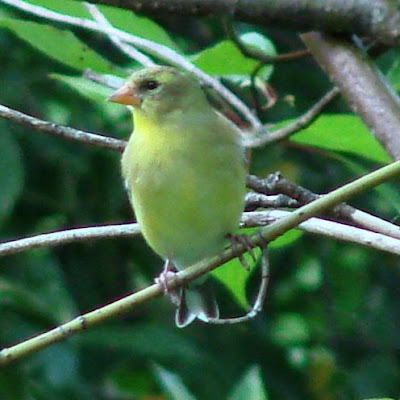 On the other hand, the gregarious flocks of goldfinches have only recently dispersed, and turned their attention to the business of nesting. One of the folk names for the American Goldfinch is “thistle-bird,” a reference to its fondness for the thistle weed. The silky thistledown is used to line the cup of grasses and plant fibers woven by the female. Later, the thistle seeds are a favorite food for feeding the young.

The female needs four to five days to build the nest, then incubates her eggs for twelve to fourteen days. The male does not share in these tasks, but stays nearby to serenade his mate, and once she is on the nest, to feed her. An observer described how the male feeds the female during incubation: “The female goldfinch heard her mate’s flight-song while he was still far distant, and called at first loudly, then softly and continuously, until he arrived. He stood on the rim of the nest and held his head above that of his mate, who pointed her bill upward to receive his offering. He took her bill in his, and through my glasses I could glimpse the white viscid mass that he passed to her. Then he lifted his head slightly in order to regurgitate a second portion. He passed her twenty-one mouthfuls in this manner....” (Bent)

When the eggs hatch, the young are also fed with partially digested, regurgitated vegetable matter. This regurgitated food results in a feeding pattern that is very different from that of many songbirds. For example, I have watched House Wrens make dozens of trips to the nest in an hour, bringing insects in their bill to feed to their young. The goldfinch, by contrast, is rarely observed carrying food to the nest, and the visits to the nest are few and far between. One observer watched a goldfinch nest for twenty hours. During this time, the young were fed on eighteen occasions, nine by the male and nine by the female. The feeding intervals were about one hour. Other observers have recorded shorter intervals, but nothing like the frequency of most songbirds.

The partially digested food which is fed to the young is nutritious. In about two weeks the young are able to leave the nest.

Many birds are very fussy housekeepers, keeping their nests clear of debris and excrement. Forbush (1925) describes the goldfinch in this regard: “As the little ones grow the parents leave them much to themselves and never seem to manifest such fussy anxiety about them as is displayed by the robin or catbird, nor are they so assiduous in cleaning the nest, which often presents a rather slovenly appearance before the young are ready to leave.” The “slovenly appearance” is Forbush’s delicate way of referring to the ring of white excrement which accumulates on the edge of the dirty nest. 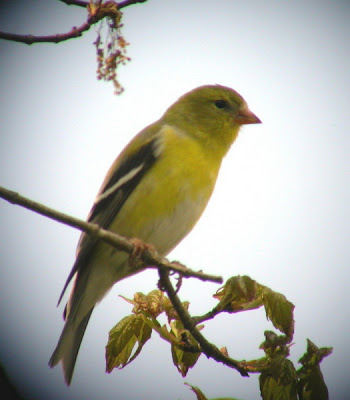 I took a break from my writing to get a cup of coffee, then lingered at the kitchen window to watch a male goldfinch feeding on sunflower seeds, adeptly cracking the outer shell with his large finch beak, letting the debris litter the ground while he swallowed the nutritious heart. He was brilliant yellow, with black wings and just the hint of a thin white wing bar, black cap and pink-yellow bill. In a few weeks when the breeding season is complete, he will revert to his drab, yet still distinctive, winter plumage.

In their summer raiment, the goldfinches provide some of the most thrilling sights in the bird world. I am awestruck when I see a flock of fifteen to fifty bright yellow birds feeding on the ground around my feeders ... until something disturbs them and they burst into flight. It is as though the sun has exploded, strewing sparks of brilliant yellow in every direction.

But you don’t have to see the goldfinch to be delighted by this little bird. It is one of the first birds to begin singing in the Spring, its song a jumbled, variable, complex of twitterings, which has earned it yet another folk name: wild canary. Or you may catch just a glimpse of an undulating flight, bounding and dipping across an open field, but the distinctive call leaves no doubt about the goldfinch’s identity: “per-chic-o-reee.”

An early naturalist summarized the life of the goldfinch: “Few birds seem to enjoy life more than these happy rovers. Every month brings them a change of fare, and in pursuit of fresh dainties the nesting-time is delayed almost until summer begins to wane ... Their love song is delivered with an ecstasy and abandon which carries them off their feet, and they circle over the fields sowing the air with music.”

Our American Goldfinch is so common, and that’s great! Every season of the year is brightened and enlivened by its color, or song, or call - or just its sudden unexpected presence along a back road as a flock leaps into the air.

Email ThisBlogThis!Share to TwitterShare to FacebookShare to Pinterest
Posted by Chris Petrak at 6:00 AM
Labels: American Goldfinch

Chris - nice homage to the "Common" goldfinch. Your post is featured in my Zen Nature Lessons for the month:
http://wildbirdsunlimited.typepad.com/the_zen_birdfeeder/2008/09/zen-nature-lessons.html
Thanks for a thoughtful post.