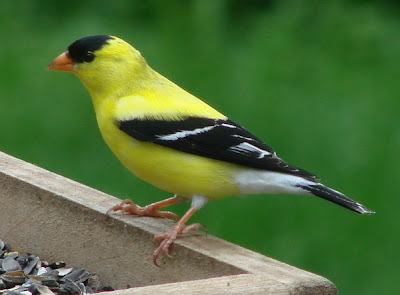 The summer breeding season, steaming along for two months now, continues to provide its entertainment to avian voyeurs like me. The fledgling young of over thirty species have passed through my yard. Many have stayed to feed regularly, like the young Downy and Hairy Woodpeckers, hummingbirds, the Song, Chipping, and House sparrows, and the Evening Grosbeaks. After absence and silence for several weeks, Blue Jays reappeared in the yard two days ago, young fledglings fluttering their wings, noisily demanding food, and chasing parents from branch to branch to shrub.

But there is one bird that has barely gotten started with its breeding, although it has been and singing happily since mid-April. It is the “per-chicoree” bird, and it has been around all year. You hear it whenever it flies, calling “per-chicoree” as it moves through the air with U-shaped undulations. Some modern birders now like to render its flight call as “potato chip.” Wing beats jerk it rapidly upward. It arcs, and plunges with closed wings, always in conversation with its friends: “per-chicoree.” 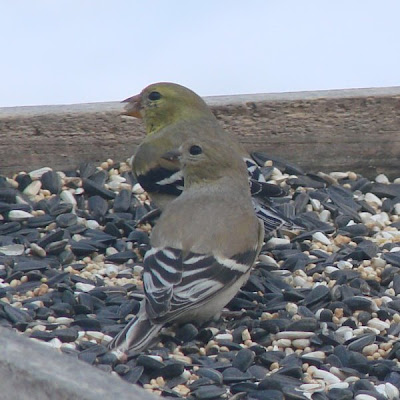 The American Goldfinch: In winter, both the male and female are olive-drab little birds wandering grassy fields and favoring thistle and sunflower feeders, but almost always moving with their undulating “per-chicoree” flight.

Some time during the Spring - usually about the middle of April - two changes take place in the life of the goldfinch. First, they begin to molt into breeding plumage. The female becomes a little bit brighter; she may sport a shading of yellow in her plumage. The male, on the other hand, becomes one of the brightest North American birds. His breeding plumage is a pure, primary yellow, accented by a black cap worn like a jaunty beret over his forehead, and black wings further accented with a white stripe. He is unmistakable. A perky, happy, primary yellow bird can only be an American Goldfinch.

Second, about the middle of April, the goldfinch begins to sing. In trees that will not begin to leaf out for another month, the goldfinch perches on the highest bare branches and sings. Sweet, sprightly, high-pitched, sometimes short, sometimes long, varied, two-noted, or trilled. Happy and cheerful. You might even hear the song in early March, or on a winter day when winter seems to have lost its grip for a moment and spring tries to make an early appearance. 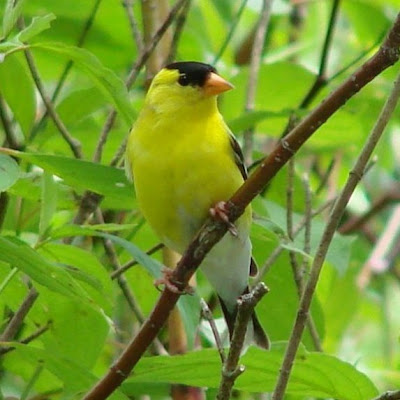 The song of the goldfinch is unlike that of most other songbirds. The Spring song of most songbirds is a macho proclamation to the opposite sex, a call to check me out, because I have great genes. It is also a territorial warning to other males: this is my turf, stay away.

But the goldfinch apparently sings for the sheer joy of singing. When they finally get around to the business of courtship (usually in late June), then their singing gets turned up a notch. The great naturalist, John Burroughs, wrote a delightful description of the goldfinch’s courtship ceremony: “When the change [in plumage] is complete, and the males have got their bright uniforms of yellow and black, the courting begins. All the goldfinches of a neighborhood collect together and hold a sort of musical festival. To the number of many dozens they may be seen in some large tree, all singing and calling in the most joyous and vivacious manner. The males sing, and the females chirp and call. Whether there is actual competition on a trial of musical abilities of the males before the females or not, I do not know. The best of feeling seems to pervade the company; there is no sign of quarreling or fighting; ‘all goes merry as a marriage bell,’ and the matches seem actually to be made during these musical picnics .... I have know the goldfinches to keep up this musical and love-making festival through three consecutive days of a cold northeast rainstorm. Bedraggled, but ardent and happy, the birds were not to be dispersed by wind or weather.”

The cheerful song of the American Goldfinch is a contrast to its scientific name: Carduelis triste. “Triste” means “sad,” presumably a reference to its mournful call. But its call is hardly mournful. The closest adjective to mournful is by Pete Dunne, who describes the classic call as “a whinny ascending, two-note query: ‘jur-EEEEE?’” 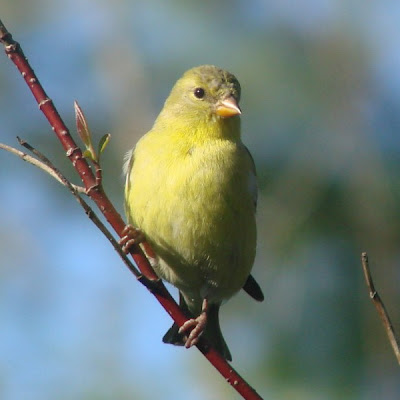 The American Goldfinch received its scientific name from a Swedish academician whose main interest was plants, who never heard the bird sing or call, and for that matter, never even came to North America. He misnamed it, but the rules of scientific nomenclature require that the name persist. So the American Goldfinch is forever the “sad” bird with the cheerful song and the happy call.

The rest of the scientific name is somewhat more accurate. The Genus name, Carduelis, means “thistle,” a reference to one of its favorite foods. It shares its Genus with western goldfinches, the Lesser and Lawrence’s, and with the two redpolls, Common and Hoary. Its closest relative in our neighborhood is the Pine Siskin. The Pine Siskin often flocks with the American Goldfinch during the winter; it has very similar habits and a song that is almost identical to the goldfinches, except for a harsh, rising “zzsshrreeee” tossed in among the sweet notes.

Appropriate to Carduelis, the folk name for the American Goldfinch is “thistle-bird.” Earlier European settlers in North America saw the goldfinch hanging on the thistle, eating the seeds and gathering the down for its nest; so prevalent was the association that they called the bird after the plant. The goldfinch prefers weedy open areas with scattered trees. It lives in orchards, among shade trees, along roadsides, and near forest edges, places where thistle and sunflowers (another favorite food) can thrive.

This summer food preference also helps explain why the goldfinch is one of the latest nesting songbirds. When the seeds ripen and provide their food, then the goldfinch has what it needs to feed its young. Most of our resident birds have completed their breeding season, or are well advanced into a second brood. The American Goldfinch is just getting started. I will have more on the nesting goldfinch next week.

Watch for a small bird, with a U-shaped flight, calling to its neighbors - the per-chicoree bird. Good birding.

Email ThisBlogThis!Share to TwitterShare to FacebookShare to Pinterest
Posted by Chris Petrak at 6:00 AM
Labels: American Goldfinch