There are some reports of this bird of prey nesting in New Jersey, and possibly Pennsylvania, but southern New Hampshire is a couple of hundred miles further north, and many hundreds of miles north of its usual range. How and why these birds ended up so far north is a subject of speculation. Global warming is the oft used mantra of explanation. 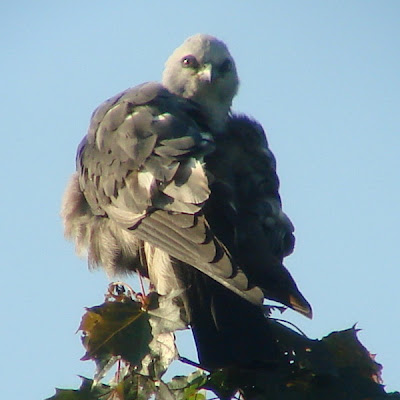 Whatever the reason, Mississippi Kites nested in New Hampshire this summer. Two weeks ago, I made a second trip to see the kites, including the single chick, at that time almost grown.

A local resident of Newmarket, has been watching the kites every day and carefully noting the actions and activity of the birds. She brought me up to date: In June, there were three kites: a young female (perhaps one year old) who was named “Missy,” a fully mature female, named “Sissy,” and an adult male, named “Pippy.” In late June, nest building was underway, and Pippy was seen mating often with both females. An egg was laid, although whether that egg came from Sissy, or Missy, is unknown.

When I was there two weeks ago, only Missy and Pippy were around. Sissy had disappeared; where, how, or why is unknown. On June 25, the birds were tending the nest and changing places sitting on the egg. Since that date, Sissy has not been seen.

The nest tree is close to a busy road and shades two neighboring driveways and a sidewalk. There was concern that the birdwatchers, and more importantly, the local neighbors, joggers, pedestrians, and mothers strolling with their babies, might be harassed by the kites. In other parts of their range, kites have been known to swoop and attack people who venture too near their nest tree.

These kites have been very tolerant of the neighbors, pedestrians, and gawking birdwatchers. They seem to recognize that people do not pose a threat. But that doesn’t mean that they have not had to protect their nest. Pippy has been seen chasing off a Broad-winged Hawk, American Crows, and an Eastern Kingbird. The kingbird, true to his tyrannical nature, has been the most annoying, often dive bombing the kites as they have been sitting quietly, preening. On at least one occasion, Pippy flew from his perch and tangled with a Cooper’s Hawk. It appears that he has a wound near one eye. The presence of other predators and Pippy’s aggressiveness may explain the absence of the older female, Sissy. Even predators like the Mississippi Kite have to contend with other predators; sometimes predators also become prey.

A reader in Mississippi wrote to me about Mississippi Kites which nest regularly near his home. He reports that the kites often engage in cooperative breeding where a third bird, probably a young bird raised by the adult pair in a previous year, assists in nest repair and in feeding the current year’s chick. He reports that “the ‘teenager’ helps out, but mainly just to bring a dragonfly to its new sibling every now and then. It mostly just sits around in the top of a tall pine and talks to my wife.”

That is very similar to what I observed with the New Hampshire kites, and what the local observer reported. During the time I watched the kites two weeks ago, Missy sat in the top of a tree preening. Pippy came once and perched near her; more often he perched in other favorite trees, hunting occasionally from the treetop perch, or while soaring on the wing. While I was watching, only Pippy, the dad, fed the chick. By the way, the chick is named “Itsy.” 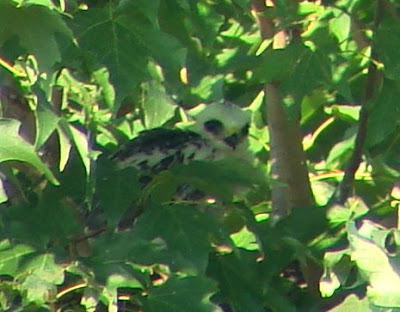 My Mississippi correspondent followed his general report on the kites in his yard with an update for this year’s trio. The adult pair, with their helper, raised their chick and by mid-August had departed, an earlier departure than in previous years. By contrast, the New Hampshire kites are quite a bit behind. In mid-August, Itsy was a sizeable nestling, but still downy. He/she was beginning to look like a kite, but not one that was going to fly right away.

When the kites do fly, they are as sensuously graceful as any bird. John James Audubon wrote with a flourish characteristic of the nineteenth century. But when describing the Mississippi Kite, his flourishing style is perfectly in order: “Its flight is graceful, vigorous, protracted, and often extended to a great height ... At times it floats in the air, as if motionless, or sails in broad regular circles, when, suddenly closing its wings, it slides along to some distance, and renews its curves. Now it sweeps in deep and long undulations, with the swiftness of an arrow ... When in pursuit of a large insect or a small reptile, it turns its body sidewise, throws out its legs, expands its talons, and generally seizes its prey in an instant ... It never attacks birds or quadrepeds of any kind, with the view of destroying them for food, although it will chase a fox to a considerable distance, screaming loudly all the while, and soon forces a Crow to retreat to the woods.”

Just in case your mind wandered while you were reading, or just in case you are resistant to stereotypical behavior and gender biases, let me repeat a couple behavioral patterns of these New Hampshire kites.

In late June, male Pippy enjoyed the company of two females, and he mated with both of them often. In mid-August, only the young female Missy was around, and she spent most of her time in a treetop preening, while Dad Pippy did all the work. One is certainly tempted to say that Pippy was just a philandering male - and that later Missy was just a vain female and Pippy an overworked, henpecked (but responsible) male. One is tempted to say that. But I won’t.

Email ThisBlogThis!Share to TwitterShare to FacebookShare to Pinterest
Posted by Chris Petrak at 6:00 AM
Labels: Mississippi Kite