A Weekend of Good Birding

The by-line at the end of this column says that I am a birding hobbyist, but that doesn’t mean that I always have time to pursue my hobby. For some reason, this summer has been like that, with many distractions and not enough time to walk in the woods or wander in search of birds - until last weekend.

My weekend of birding started with a day trip to Plum Island. On the way, we stopped in Newmarket, NH, to check on the nesting Mississippi Kites which I wrote about two months ago. These southern birds of prey have never been reported nesting so far north before now. As we walked down Main Street with binoculars and scope, the local woman who monitors the nest daily greeted us. Pointing toward different tree tops, she said, “Mom’s there. Dad’s there. Baby’s still in the nest.” We watched Mom preen. We watched Dad fly gracefully, swoop, and then carry food to the chick in the nest. And through the thick leaves, we could just see the growing youngster moving about in the nest, still a week or so from fledging. 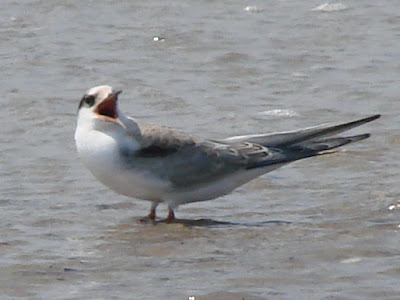 On to Plum Island and the wildlife refuge near Newburyport, MA. There we saw both the waning of summer and the beginning of fall. The summer breeding season was coming to an end as Common Terns were busy feeding their fledgling young. There was so much movement that it was hard to figure out how many families and how many young were being cared for. Young terns gathered in a loose group of three to six, impatiently waiting while parents fished over the open water. Sometimes patience was in such short supply that one or two or more would chase an adult. Other times a chick would wait quietly until it spied an adult carrying food, then scream loudly. The chicks were not far removed from independence, and it sometimes seemed that the adult was carrying food and delaying the feeding, as though to say, “Look this is how it is done.”

Shorebirds represented the beginning of fall. They were resting on the sand and feeding along the shore. Most of the small sandpipers, the peeps, nest in the Arctic. But their stay is brief. They court; they mate; they incubate. When the eggs hatch, the young are precocial - relatively well-developed and able to leave the nest soon after hatching and feed themselves. When the young leave the nest, the adults leave the Arctic and their young and start south. The young follow some weeks later. We saw adults: Sanderlings, Semipalmated Sandpipers and Plovers. The sandpipers and Sanderlings were in various stages of molt - some still showing their breeding plumage, some in winter plumage, and many somewhere in between. All reminded me that the best any field guide can do is to give an impression or suggestion of what a shorebird’s plumage may be. 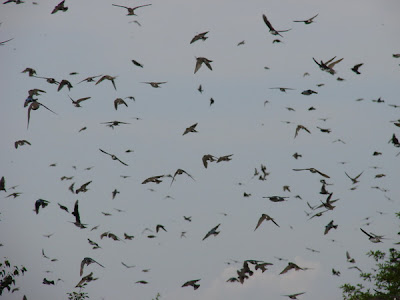 But the real attraction for a mid-August day on the Massachusetts coast comes down to one bird: the Tree Swallow. Finished with their breeding season in New England and the North, they begin forming their winter flocks. Along the entire length of the island, swallows swooped and swirled over the dunes, salt marshes, and tidal pools, feeding on nature’s bounty in the form of mosquitos and green-headed flies. Near the southern end of the island they must have been staging for a flight across the bay. There we stood among scattered small trees and shrubs and watched the chaotic roiling of some 10,000 swallows. It was breathtaking.

Saturday morning, an Audubon walk through a private preserve provided this same mixture of impending fall and waning summer among songbirds. A pair of Scarlet Tanager and Baltimore Oriole were just sort of hanging around. A Canada Warbler was on the move, but not hurriedly so. A Yellow-bellied Sapsucker was keeping on eye on a juvenile. 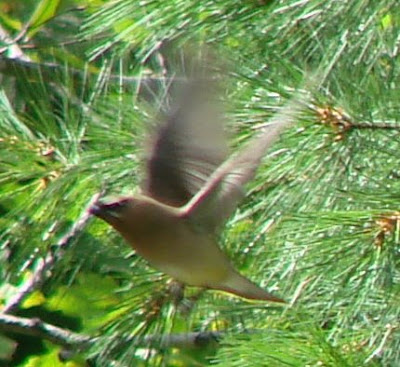 But here, and everywhere else last weekend, the greatest activity was coming from the Cedar Waxwings. They nest in loose colonies; when one family fledges, there are likely to be other families fledging in the same vicinity and at the same time. The waxwings rushed from tree top to tree top, swooping out to flycatch, returning to feed young - young swooshing out, trying to feed on their own. Constant movement, constant activity, and all accompanied their thin, buzzy “sreee.”

Back in my yard in the afternoon, I continued to watch waxwings as they fed over the river. In a couple of months they will turn to the berries and crab apples hanging thickly on branches, but for now they are gobbling the insect protein.

The wren in my yard was still protecting his second brood. A House Finch fed a youngster, as did a Purple Finch. Young Rose-breasted and Evening Grosbeaks, pretty much on their own now, came by for a meal, as did young hummingbirds. The male seems to have moved on; at least he is no longer trying to defend his territorial prerogatives. 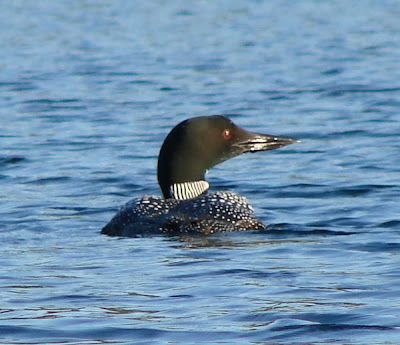 Sunday evening we kayaked on Sunset Lake. A pair of loons lured me from one side of the lake to the other, and from the west end to the east end and back again. They were just beginning their molt from breeding to winter plumage - still sleekly handsome. They seemed to have little concern as I drifted nearby and one came on its own to within a few yards, its red eye gleaming in the evening light before it slid quietly beneath the water.

We closed out one of the most pleasant weekends of this summer sitting on the edge of the river behind our home, slowly eating a bowl of ice cream. The sun had disappeared behind the hills and the hills were growing dark. I looked upstream. The remaining light of the dusk sky reflected on the river, giving it an almost mirror like glow. In the fading light, I saw small forms floating along the current, dark against the river.

We sat very still as the dozen forms approached on the current. But we were not unnoticed. A few yards upstream from where we sat, the mother Hooded Merganser went into a frantic half flight. Her brood followed suit. Half formed wings lifted them enough that they could scurry-run on the river’s surface. Quickly they ran past us and continued running downstream until they disappeared around a bend.

The last light of the day faded away, and we said a good night to a weekend of good birding.