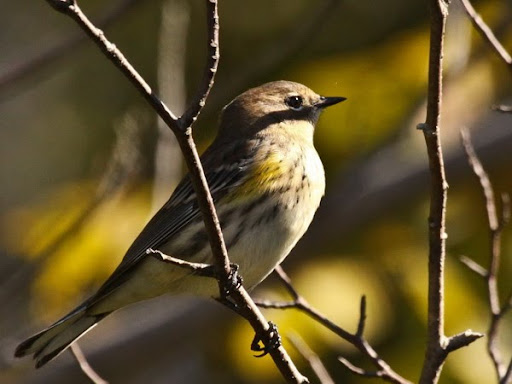 Watching warblers during their Fall migration is very different from watching them in the Spring. In the Spring, their plumage is fresh, and for many species, colorful. They may be on the way to breeding territory, but they are singing at every opportunity, getting their voices tuned up for the competition over a mate.

As the warblers move southward in the Fall, there may be more of them depending upon how successful they have been in raising young. If they are singing, however, it is not with the same vigor as in the Spring. And their plumage is often dull, especially for young birds. Roger Tory Peterson included two pages in his Eastern Guide illustrating “Confusing Fall Warblers.” He pictured twenty-four species of warbler, plus a kinglet and vireo. The most recent one volume edition of his field guides drops the word, “confusing,” from these pages. That was an editorial decision; the birds are still confusing.

Many adult warblers are in worn plumage or have molted into a less distinctive, more camouflaged, winter plumage. Most of the hatch year warblers, the immatures or juveniles, are plain compared to breeding adults. They can be easily overlooked. Which is the point: it gives them a slight edge against predators. 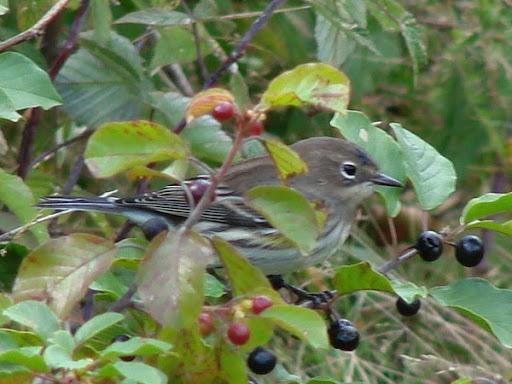 A case in point is the Yellow-rumped Warbler. When I showed my favorite companion a couple of photographs I took a week ago, her response was, “It looks like a sparrow.” That is, a non-descript, little brown bird.

But a closer look showed a wash of yellow along the sides and a broken white eye-ring. I had also seen the bird fly, and then it flashed the diagnostic yellow patch which gives it the common name: yellow-rump.

On recent days, the Yellow-rumped Warblers have been all around the clearing on the Putney Mountain ridge, busily feeding on berries or flycatching insects. They are plain little birds which sometimes showed their “butter butt” (as some like to call it) when flying.

The Yellow-rumped Warbler is one of the few warblers that does not abandon North America. Its winter range extends throughout the southern states and well northward along the Atlantic coast. Wintering yellow-rumps are not uncommon near the coasts of Connecticut and Massachusetts.

Because so many winter in North America, the Yellow-rumped Warbler is one of the first warblers to return in the Spring. Like many birders, I await the April morning fallout of these birds. It is a sign that at least some of the cycles of life are working as they should. 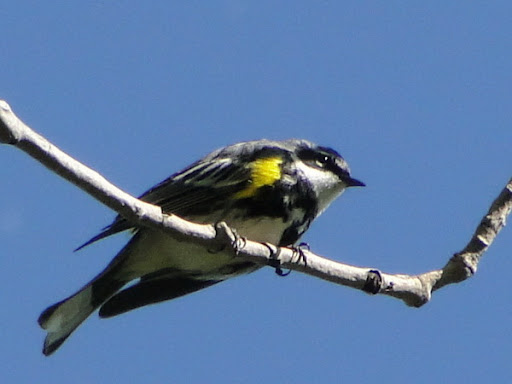 The mature male Yellow-rumped Warbler in fresh breeding plumage is stunning: White wing stripes on blue-gray wings. White throat and belly separated by a black bib. Black mask through the eyes. Broken white eye-ring. Bright yellow on the flanks. Bright yellow butt. And bright yellow cap. Dull down the colors, and you have a breeding female.

Scientifically, the Yellow-rumped Warbler is Dendroica coronata. Dendroica comes from Greek and means “tree-dweller.” Coronata is from Latin meaning “crowned,” and refers to this warbler’s bright yellow crown. In other words, scientists name the bird for its head, and common people name it for its butt. Make of that whatever you want. (Audubon, by the way, knew it as the Yellow-crowned Wood-Warbler.)

I should probably point out that not every bird which flashes a yellow butt when it flies is a Yellow-rumped Warbler. Magnolia Warbler and Cape May Warbler also have yellow rumps and share some other plumage similarities, suggesting that all may share a common ancestor somewhere in the distant past. The Yellow-rumped is bigger, and among warblers, in general, is described as burly, sturdy, and athletic. 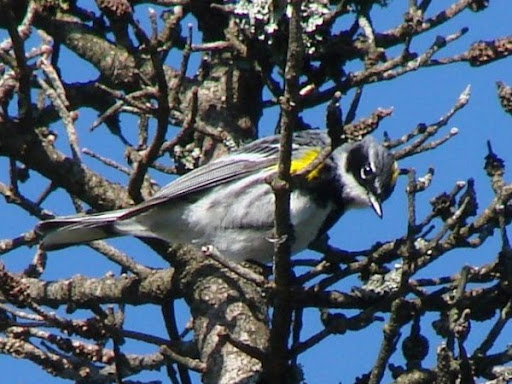 There are two sub-species of the Yellow-rumped Warbler. The “Myrtle” is the eastern and northern form. Audubon wrote that during winter, “its principal food consists of berries of various kinds, especial those of the Myrtle and Pokeweed” - hence its name. The western form is “Audubon’s.” It was first described by the nineteenth century ornithologist John Townsend, who honored his friend in the naming. Audubon’s Warbler is one of the few birds named in honor of John James Audubon. Unfortunately for Audubon, he lost the warbler honor when scientists concluded that “Myrtle” and “Audubon’s” were really the same warbler species. “Myrtle” Warbler has a white throat; “Audubon’s” has a yellow throat.

Warblers, in general, need insects to survive. The abundance of this protein source in late Spring and Summer is what brings them to our woodlands for breeding. The Yellow-rumped Warbler is one of the few warblers that can survive on berries and seed for an extended period of time. Forbush wrote that along “the coast during the milder winters there are many flies rising from the seaweed in sheltered spots on mild days even in January, and there are eggs of plant-lice and some hibernating insects to be found on the trees, but the principal food of the Myrtle Warbler on the eastern coast during the inclement season is the bayberry.”

The Yellow-rumped Warbler is a leisurely migrant. Through September, October, and much of November, it gradually drifts southward, as though it just has to take time to enjoy the brilliant colors and crisp, clear days of a New England autumn. It is as though it was unaware that autumn will be followed anon by winter. 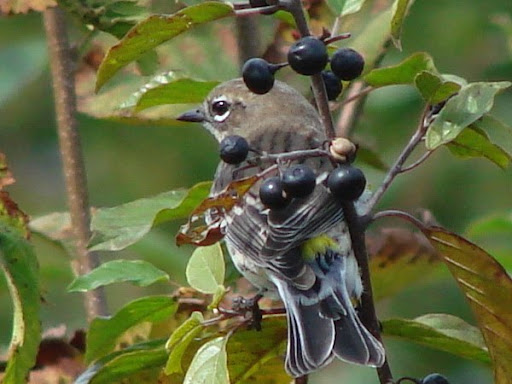 Well, we know that winter is coming. We are stacking our wood, putting in the storm windows, bringing out the flannel shirts, and servicing the snow blowers. But not at the expense, I should hope, of savoring these days when nature spills its palette across our hillsides.

I’d like to take a lesson from the Yellow-rumped Warbler and do some drifting, meander through the woods and fields, and see what there is to be seen. Maybe a bluebird, always a chickadee, and surely the bright butter butt.

Email ThisBlogThis!Share to TwitterShare to FacebookShare to Pinterest
Posted by Chris Petrak at 6:00 AM
Labels: Yellow-rumped Warbler

The photos are incredible - each and every one of them! I can't even FIND a warbler, never mind photograph one. Congratulations!

I was curious what a "butterbut" was; had never heard of it before, but it's an apt description and your last picture captures it very well.

Hi Chris,
Yes the breeding plumage is definitively gone for now and I miss that already as well as the strong song coming with it.. This is life isn't it? For me now, I'll have to wait for next May, maybe it will be shorter for you!!
Beautiful post!

Great post and photos on the Yellow rumped Warbler. I think they are pretty birds no matter when you see them.

I really enjoyed reading this post and loved all the wonderful photos that you included!! I am finding that I really have become a warbler lover and can't wait for the Spring to arrive so that I can hopefully see and id many of the birds I learned about this year. I love reading your posts as they are very informative and so well written. Thank You!!