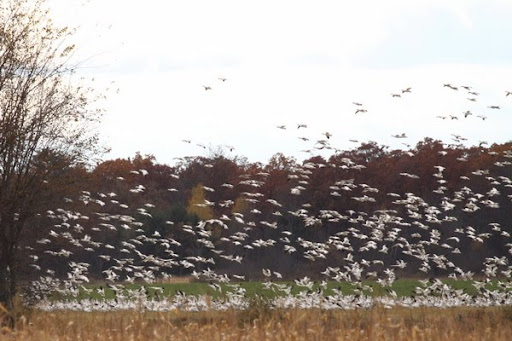 Last week, I had plans to go to Dead Creek in Addison to see the Snow Geese. It is a pilgrimage I try to make once a year during the fall. Thousands of Snow Geese stop at the wildlife management area during their journey south. The flight of these geese can be breath taking. Plus, you never know when a Ross’ Goose might be among the mix, and that would give me another rare goose to write about.

But ... deep into the evening before, I received an alert that a Scissor-tailed Flycatcher had been sighted in Orange, Massachusetts, an hour south of my home, but in the opposite direction from Dead Creek. I faced a dilemma. Do I go chasing after a bird I have never seen, but have a good prospect of seeing on a trip to Texas in November? Or do I go north to see abundant numbers of migrating geese that I see every year? I opted for the tick on the life list - a bird in the hand, as they say .... In the morning, I headed toward the airport in Orange.

The Scissor-tailed Flycatcher is a common breeding bird on the southern Great Plains. It is the state bird of Oklahoma. From its breeding grounds, it heads to the open areas in the tropics. Except, sometimes it gets lost. Then it may show up just about anywhere in North America. There was one in Arlington, Vermont, in May, one on Cape Cod in September, and now one in Orange. 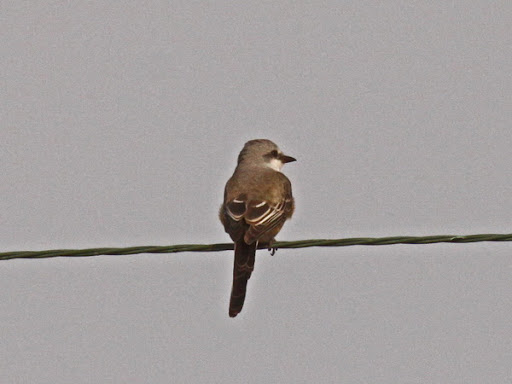 A bird which shows up far out of its normal range, or far off its normal course of migration, is called a vagrant. My dictionary defines a vagrant as one who strolls from place to place, an idle wanderer ... a nomad with no home ... someone, or thing, with no fixed course, direction, or aim. The dictionary definition does not quite fit “vagrant” when applied to a bird. The vagrant bird is not an idle wanderer. It is lost. Terribly, and very likely, dangerously off course.

When I arrived at the tiny airport in Orange at 8:30, there were already half a dozen bird chasers there, along with a newspaper reporter from Worcester, Massachusetts. Within fifteen minutes, the bird returned to a favorite perch on a wire, and for the next hour, I followed it along the edges of the airport as it did its flycatching thing - perching on a fence, wire, or post, then sortieing forth to capture flying insects. Birders came and went.

The Scissor-tailed Flycatcher is a tyrant flycatcher, closely related to our familiar Eastern Kingbird. It is about the same size as the Eastern Kingbird, though slimmer. It is typically described as elegant, or handsome. When perched, it almost looks like our familiar mockingbird. A young birder I was with briefly wondered if there were two Scissor-tails along the fence wire; one was a mockingbird.

The most distinguishing characteristic of the Scissor-tail is its tail. The tail is long - disproportionately long - up to twice as long as the body. Apparently, the long tail enables the Scissor-tail to perform aerial, flycatching acrobatics. One of Bent’s contributors to his “Life History” described the flight: “One of his favorite performances is to fly up and, with rattling wings, execute an aerial seesaw, a line of sharp angled VVVVVVs, helping himself at the short turns by rapidly opening and shutting his long white scissors.” 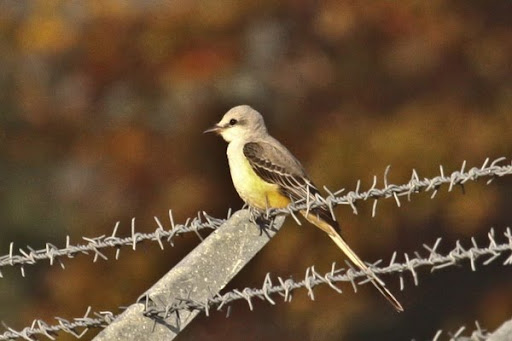 Like other tyrant flycatchers, the Scissor-tailed Flycatcher on its breeding grounds is a tyrant toward intruders, brooking no idle nonsense from other birds, even those many times bigger than itself. Again, Bent’s contributor: “Another day we saw a scissor-tail in pursuit of an innocent caracara who was accidentally passing through the neighborhood. The slow ungainly caracara was no match for the swift-winged flycatcher [which dashed] down upon him and actually rode the hawk till they were out of sight.” The Northern Caracara weighs about 2.2 pounds and has a 49 inch wing span. The Scissor-tail weighs about 1.5 ounces and has a wingspan of 15 inches. I have to admire a bird with the moxie to take on something so much bigger than itself.

The Scissor-tailed Flycatcher in Orange was a juvenile. It was found on a Wednesday, three days after the New England Patriots played their football game in a nor’easter snow storm. It seems a reasonable conclusion that this northeast moving weather system also brought, or pushed ahead of it, the flycatcher. Though the weather was relatively balmy for late October when I saw the bird on Thursday, it was much cooler than the Scissor-tail would normally be accustomed to. It seemed to be having no difficulty in feeding, but one has to wonder, for how long.

Many birders love “accidentals” and “vagrants,” and enthusiastically chase after them. The British term for such birding is “twitch,” a term which far more accurately describes the physical effect which the chase produces in birders. I admit that I have done my share of chasing in New England. When I reviewed my life list, I found at least ten birds that I have seen in the Northeast which simply do not belong here. They were far from their normal range; one might even say that they were woefully lost. 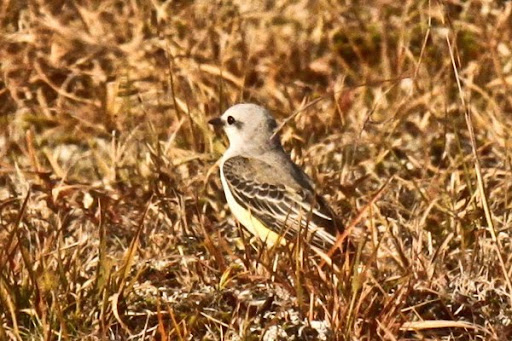 For me, there is a bitter-sweet quality about seeing these accidentals and vagrants. For the Scissor-tailed Flycatcher, I have to use the words, “poor bird” - a human emotion that feels sorry for a bird that is valiantly trying to survive, but probably will not. It is so far from where it should be, that it is unlikely it will find its way back. The Scissor-tail was seen on Wednesday and Thursday, and then the reports ended. Did it move to another open field, one with no birders to report its presence? Did it succumb to cold nights and heavy rain? Did a predator get it? Or did it head toward home in the tropics? There is no way of knowing, but the last seems to me the most unlikely.

So I saw the Scissor-tailed Flycatcher that does not belong in New England, and at the bird’s expense, added a new tick to my life list. Then when the weekend rains cleared out, I went to Dead Creek to see the Snow Geese. Though they were roosting at a distance, whenever a passing winged predator put them up, they filled the horizon with a blizzard of swirling white. 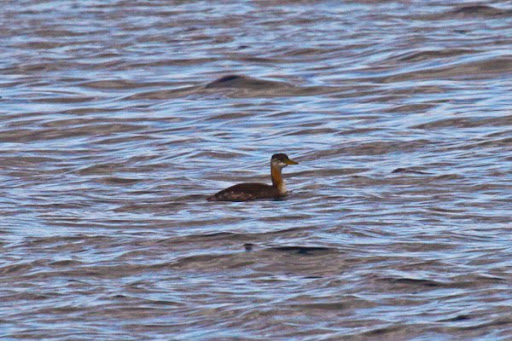 On nearby Lake Champlain, there was a raft of ducks that included all three scoters. There were Common Loons, Horned Grebes, and a scattering of other waterfowl. Red-necked Grebes had not yet molted to their gray and white winter plumage; they still sported their breeding plumage red neck.

For late October, these were a couple of days of good birding.

...really interesting post and beautiful photos of the flycatcher. My favorite is the sweet bird sitting on the wire fence. I hope he finds his way home eventually (even if more than likely he won't)...

Hi Chris,
Very nice post and beautiful shots. I know what you mean I think... It is funny to see all birders in one place to see a rare bird. it happened to me last time when I went to see the least sandpiper. There were 12 cars in front of the lake, full of bird watchers to see it!!

With a bit of luck, this bird oriented himself and headed for warmer parts as many Southerner's do after their first major snow.

At least he had a chance. I've been out in the open ocean traveling at 16 knotts with a song bird chasing the boat. Can you imagine how desparite he must have been to keep chasing the boat and land on it with 60 people applauding as it landed? It turned out to be a Yellow Warbler.

A very informative post and I would love to some day see a scissor-tailed flycatcher. Such a pretty and sweet looking bird. I'm glad you got to see and photograph all the birds you were seeking!! Definitely makes for a great birding experience!

I love fall for the foliage and the odd birds that show up! As always, great pictures, Chris!

What a great post - thoughtful and thought provoking! I did read that juvenile gulls and terns blown across the Atlantic will return to New England in subsequent years, thereby expanding our shorebird populations. That is a nice thought.

So glad you were able to see the Scissor Tailed...